What land did Polish nationalists claim in 1914?

In the early 20th century, Poland was split between Russia, Austria-Hungary and Germany. However, clear borders of the "country" did not exist.

When the country was finally re-created after the Great War, it was extremely tough to put definitive borders in place, which led to war with almost all of its neighbours:

Thus, the borders of the Second Polish Republic were created with wars, rather than based on the principles of self-determination, where regions, which considered themselves as part of Poland, joined.

Exactly what lands did the Polish nationalists claim in 1914, before the utopia of a newborn Polish state had to clash with reality?

We have to differentiate what "nationalists claimed" means exactly. As the territorial evolution of Poland is indeed so colourful and twisted, that "Poland" had never been a nation-state.

Within Poland, or Polish nationalist circles, there were different schools of thought, just like in all other countries at the time.

Some would have been content with just making Congress-Poland independent from Russia, some wanted to go back to the glory old times, any time really, but some even so far as to the Polish-Lithuanian commonwealth of the late middle ages:

While the situation on the ground somewhat resembled this: 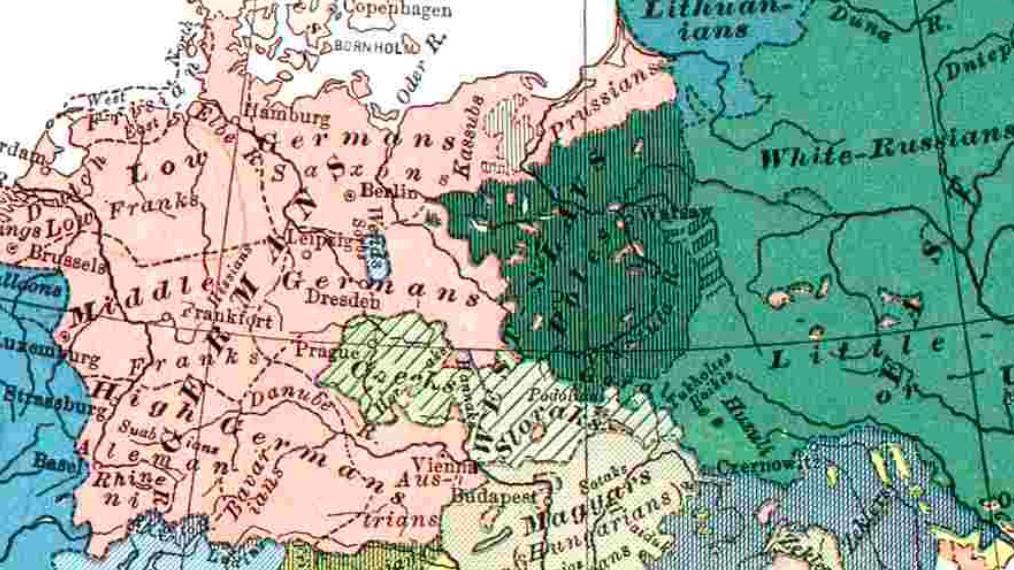 Hammond's Racial Map of Europe, 1916
Since nationalism is racism, an 'honest deal' couldn't bring Wilson's 14-points in congruence with 'access to the sea' at the (same) time. Note that the resolution of this map isn't overly good to begin with and the actual settlement patterns were way more complicated than possible to simplify exactly into a map.

The main lines of proponents of "ideas" for a great Polish National state at the time –– that also had some clout and were not just spitballing pure phantasmagorias –– were those of Józef Piłsudski and Roman Dmowski.

Of the latter, this is what his ideas for 'ideal' 'Polish' borders: 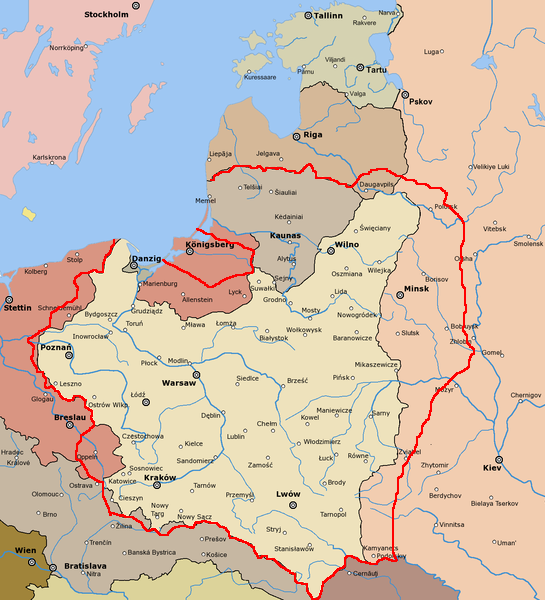 For most of the late 19th century the nationalist discourse grew ever more radical, intolerant and outright hateful. It is therefor quite instructive not only to examine some proposed lines of expansion on a map, but the arguments used to favour one line over the other. Neither lines nor arguments had much in their favour.

Throughout the late nineteenth century the tsarist authorities were engaged in a campaign to russify their state, and even if they could not denationalize the Kingdom, they could at least (they thought) prevent the Poles from ever reclaiming their hegemony over the vast eastern territories of the old Republic, the so-called kresy (the borderlands) encompassing what we today call Lithuania, Belarus, and Ukraine. It followed that Poles could not legally express any colonial ambitions over the lands and peoples of this region, at least not in the Warsaw press. In Geneva, however, Milkowski’s Wolne Polskie Slowo faced no such restrictions (indeed, this is why the paper was called “The Free Polish Word”), and he provided both exiles and correspondents from the Russian Empire with a forum to explore the possibilities of a colonial discourse.

The colonization of wild countries by European nations takes place generally in a manner that is not very humanitarian, because it is accompanied by the mass extermination of the local wild population. Thus, on the one hand, [colonization] makes the customs of the often peaceful local tribes militaristic and wild; on the other hand, it lowers the level of human sentiments in the colonists themselves. Nonetheless, one must agree that the process of colonization, quickly increasing the size of the civilized races and thus filling up heretofore wild territory, creates new centers of civilization and becomes the salvation not only for the races occupying a given territory but for humanity as a whole.

In the metaphor-ridden, aesopian world of the Polish press no one had ever dared discuss colonization in such a manner. This was a justification not only for conquest but for extermination. Dmowski, of course, was not about to allow this reasoning to return to him in the form of a justification for Russian expansion. He clarified that the process he was describing was “progressive” only when dealing with “uncivilized” tribes; in the case of groups possessing the “spiritual assets corresponding entirely to the level of contemporary civilization,” such aggression could not succeed. Nonetheless, Dmowski wrote, “in the majority of cases” conquest, colonization, extermination, and assimilation were “useful not only for the group in question, but for universal progress.”

In the very first issue of Wolne Polskie S`owo, right after the paper’s “Program,” there appeared an essay called “Ruthenia and Poland.” The author explained that this subject had been given pride of place in the new paper because “we openly recognize that there is no more important question than this.” The emphasis here was on unity: “Poland without Ruthenia, Ruthenia without Poland—each of these alone is weaker by half against Moscow.” Not really by half, though, because the two sides of this imagined alliance were hardly equal. “The Ruthenian nationality,” the author wrote, “exists in reality, as has been demonstrated by the appearance of popular literature, but over the course of centuries it has not achieved those properties of civilization demonstrating a political idea of nationality.” Thus it fell to the Poles to play the role of the older brother, educating and defending their younger siblings to the east. This did not imply that the Poles wanted to denationalize the Ukrainians, Milkowski insisted repeatedly. As one correspondent put it in 1890, “the Poles, hoping to obtain freedom, can never hope to deprive the brother Ruthenian nation of this. We want to be free and we want to free others.” Wolne Polskie Slowo even claimed that the very term “Poland” was used only as a convenience; what they were talking about was a federation that included Lithuania and Ruthenia as well. Within such a union, “We would not even think of polonization.”

This freedom, however, was based on the presumption that the Ruthenians would freely chose to federate with Poland. Another author, even while evoking the model of Switzerland, insisted that Poland had to be recreated in “its old borders, extending as far as possible.” The generosity of Wolne Polskie Slowo’s contributors wavered with the first signs that the Ruthenians might decide to be “Ukrainians.”

Such models did exist in the past, and they were not always mere veils concealing Polish aspirations to Lithuania, Belarus, and Ukraine (although this rhetoric has occasionally been exploited for irredentist ends). That it became impossible by the 1890s for Lithuanians, Ukrainians, or Jews to take seriously the idea of a truly inclusive Poland—that the culturally homogeneous nation-state seemed to be the only option—was to a large degree the bitter harvest of the process described in this book. It is not so much that the ideal of a culturally inclusive Poland in its 1772 borders was theoretically impossible, or necessarily a violation of the cultural self-determination of the diverse communities of Eastern Europe. Rather, Poland as defined by most Poles in the late nineteenth century—as a sociological community marked by empirical features such as language and religion—was incompatible with Lithuanian, Belorussian, Jewish, and Ukrainian ambitions.
–– Brian Porter: "When Nationalism Began to Hate. Imagining Modern Politics in Nineteenth-century Poland", Oxford University Press: Oxford, New York, 2000. 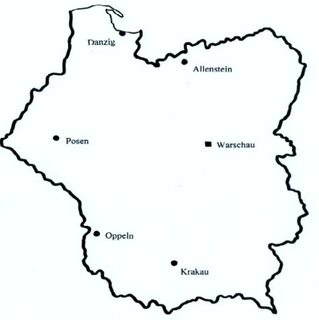 'Ethnographic Poland', according to Czesław Jankowski, 1914 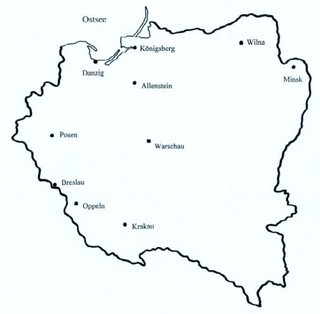 Conceptual map according to Adam Szelągowski, 1918 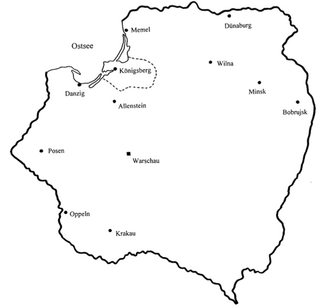 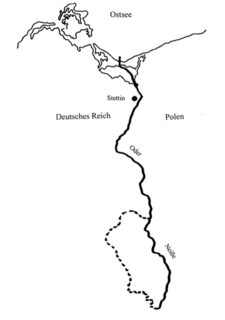 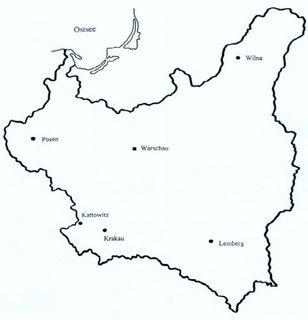 An approximation of the eastern boundary of ethnic Poland was drawn by the Curzon Line put forth by Britain's foreign secretary, George Nathaniel Curzon. Coincidentally, or otherwise, it was actually very similar to the dividing line of the Hitler-Stalin Pact of 1939. Either of these two lines were ones that Polish nationalists could legitimately claim.

In the west, Polish boundaries were indicated in Wilson's 14 points as "territories inhabited by indisputably Polish populations, with free and secure access to the sea." The Western boundary that was drawn after the end of World War I basically satisfied these criteria.

A Polish nationalist of 1914 who wanted to stay on the right side of Britain and the United States might take comfort in the views of Curzon and Wilson. Poland got more or less what was right in the west, but ended up with "too much" in the east after she captured Bylorussian and Ukrainian lands in a war with Russia.

Not the answer you're looking for? Browse other questions tagged 20th-century germany russia poland austria-hungary or ask your own question.

1
Why aren't the Silesian Uprisings, especially the 3rd, refered to as a "war"?

18
Have Germany and Poland ever signed a peace treaty after WWII?
12
Conditions of Upper-Silesian-Poles minority in Weimar Republic?
13
Did the German authorities respell Polish names to be more German during the time of the German Empire?
8
Did Russia declare war on Germany before its invasion of that country on August 7, 1914?
1
How did the written Polish language survive in eastern Germany during partition (if it survived at all)?
33
What concessions did Hitler demand from the Poles before 1939?
5
How could Poles from Kresy be enough to repopulate entire regions of Poland?
3
What did Russia do in 1848 that could make the Austrians seek "brutal revanche" towards the Russians?