Why is there hostility between Russia and the Baltic states? [closed]

What is the cause of the hostility between Russia and the Baltic states?

soviet-union russia
share|improve this question
edited May 29 '16 at 21:02

It's nothing the Baltic states did. They were caught between a paranoid and a land-hungry bully.

The Baltic states had the misfortune to be caught between two of the largest belligerents of WWII, the Soviet Union and Germany. In an attempt to buy time, in August 1939 the USSR and Germany signed the Molotov–Ribbentrop Pact to split up Eastern Europe into spheres of influence giving each side a buffer zone against the other. Shortly after they signed the German-Soviet Frontier Treaty to make some modifications. 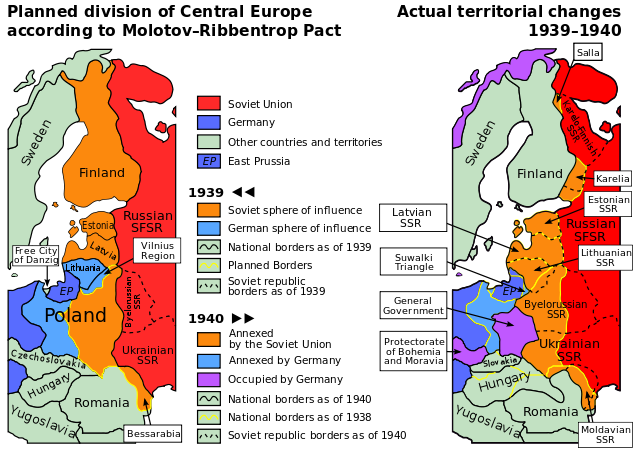 The Germans wanted Lebensraum. The Soviets wanted a buffer zone against the inevitable German invasion. The Baltic states wanted to retain their independence.

Shortly after the invasion of Poland, the Soviets accused the Baltics of not actually being neutral and demanded they sign "Mutual Assistance Treaties" (Estonia, Latvia, Lithuania) which theoretically protected the Baltic states, but just allowed the Soviets to establish military bases on Baltic soil which they would then use in June 1940 to take over those countries.

They tried the same thing with Finland fearing the Finns would either ally with Germany or the Germans would simply bowl them over as they did other neutral countries. Not being boxed in, and assuming the Swedes and Western Allies would come to their aid, the Finns politely rejected the offer recognizing it would lead to the loss of their sovereignty. The Soviets, suspecting Finland had already allied with Germany, trumped up a bunch of charges and invaded in winter of 1939 starting the disastrous Russo-Finnish Winter War.

The humiliating defeat for the Finns led to them becoming co-belligerents (not really allies, just fighting against the same enemy) with the Germans to recapture territory lost in the Winter War, exactly what the Soviets feared. This was known as the Continuation War.

In the end, only Finland kept their sovereignty.

Not the answer you're looking for? Browse other questions tagged soviet-union russia or ask your own question.

11
How and why did Charles XII Get to Poltava?
27
Why hasn't Russia maintained significant numbers of aircraft carriers?
11
Have there been any joint US-Russia/Soviet military engagements post WW II?
8
Has there ever been a direct clash between NATO and Russia?
7
How much of “Russia” was actually occupied by the Germans in World War II?
9
Was there anything in common between the War of 1812 between Britain and America and the War of 1812 between Napoleon and Russia?
1
Is Russia a direct successor of the USSR? Could the USSR be considered to continue existing under a different name?
2
Why was there such tension between the Ottoman Empire and Russia during the Armenian genocide?
5
Are there notable incident(s) where Russia/SU was wrongfully accused by Western powers in the 20th century?