Why did the Erdoğan government like to worsen Turkey's relationship with Israel? [closed]

Ask Question
Asked 8 years, 7 months ago
Active 7 years, 9 months ago
Viewed 531 times
8
Closed. This question is off-topic. It is not currently accepting answers.

Turkey has long been an ally of Israel. Turkey bought a lot of military products from Israel.

If Turkey hates Israel, they could have handled the situation much differently. Israel was in the process of delivering some major military products and Turkey is still not self-sufficient in those areas.

Why does the Erdoğan government not consider the alliance important? What is in their mind?

As with the case of France, Turkey's objective is not to have worse relations with Israel. Instead the worsening of relations between Turkey and Israel is a product of internal issues on both sides.

Turkey and Israel do have a long history of military cooperation and coordination. Furthermore, Turkey has bought military equipment from Israel (tanks and drones come to mind), but I'm unaware of "technological aid" being supplied by the Israelis to Turkey.

In terms of the deteriorating relations from the Turkish side, some background is necessary. Turkey is deeply divided between a traditional elite with military connections and a new, more devout elite which better represents the majority public opinion. Turkey has long been a country in which the United States is deeply unpopular (on both the left and the right). By extension, Israel is too. The military elite, which is close to both of those countries, is now experiencing a backlash which has manifested itself mainly in Recep Tayyip Erdoğan's Adalet ve Kalkınma Parti (the AKP).

Erdoğan has been less compromising on issues which are popular in Turkey, but perhaps problematic in foreign relations. Until recently, Turkey had been enjoying good relations with Syria and Iran, whereas in the past they had been much cooler. In the Arab world in general, Turkey now has a very positive image. Part of this rapprochement involved being more openly critical of Israeli policies towards the occupation of Palestinian land and the treatment of Palestinian refugees. Israel used to be an ally against common Arab threats, but these do not exist as in the past (for example, Syrian support for Kurdish rebels).

Turkish public opinion also holds that Israel has also secretly allied itself with Kurdish groups active in Turkey and surrounding countries. Leaving aside whether this is true or not, it is another reason for an increasingly negative perception of Israel.

Israel has also been willing to sacrifice its relationship with Turkey to a degree. It could have avoided a lot of bad press in Turkey had it handled the Mavi Marmara incident more delicately. It also has taken actions such as publicly humiliating the Turkish ambassador to Israel, Mr. Ahmet Oğuz Çelikkol, by inviting him to a meeting and making him sit on a very low chair while the Israelis were sitting on very higher chairs looking down on him. They also placed an Israeli flag on the table while failing to provide a Turkish flag, in violation of diplomatic protocol. 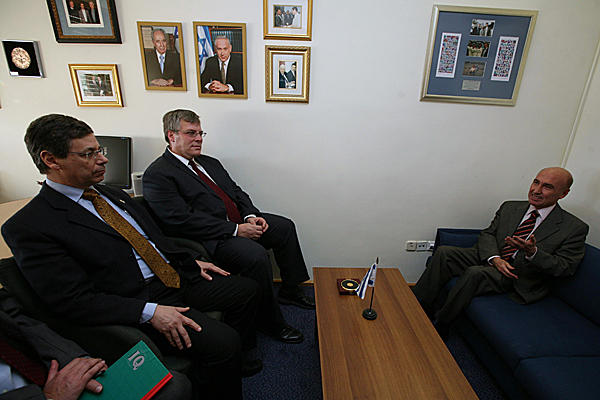 That being said, as long as there is a power struggle in Turkey between the pro-Israel military and the AKP, relations between an Erdoğan government and Israel are unlikely to improve. Likewise, as long as Israel continues to project a negative image, it will be politically difficult for Turkish politicians to promote a closer relationship.

As SigueSigueBen correctly points out, the worsening of relations between Turkey and Israel is part of a larger trend in which Turkey shifts its orientation from the West to the Arab and Muslim world. An older (2005) but very lucid and penetrating exposition of this process can be found in the book The New Turkey by Chris Morris.

Erdoğan is a conservative nationalist politician. His ideology is similar to Pochvennichestvo in Russia, Völkisch movement in Germany or radical catholic parties in France. This public always was anti-Semitic.

13
How did France worsen its relationship with Turkey?

11
Did Napoleon ever visit Modern Israel?
13
How did France worsen its relationship with Turkey?
2
How much did Israel pay the Libyan Flight 114 shootdown victims?
4
Why did Anwar Sadat establish diplomatic relationship with Israel and did that decision pay off?
6
Why were Soviet attitudes towards Israel inconsistent in the late 40's and 50's?
13
How did Azerbaijan come to be allied with Turkey and Israel?