Is there a symbol associated with Loki from the Norse pantheon? [closed]

Questions on social sciences other than History are off-topic here, unless they also involve history in some fashion. While ethics, archaeology, etc. are all connected to history, each field has their own experts who are better equipped to answer such questions.

I've been looking around for any kind of sign, symbol, sigil, or such that can be said to have anything to do with the deity Loki, of the Norse pantheon.

There doesn't seem to be anything as obvious as what the hammer Mjölnir is to T(h)or, of same pantheon. Is this to be expected? Is a symbol as strongly associated as Mjölnir the exception?

Loki was actually the son of a Frost Giant, and as such often is not counted as a proper member of the AEsir. When he appears in stories, it is usually as an antagonist for the hero(es) of the tale. As such, I don't think he was the subject of much veneration.

The only common running theme I tend to see in numerous depictions of Loki (such as the one below) is his punishment of being bound with a snake over his head. Most of the rest show him taunting someone. 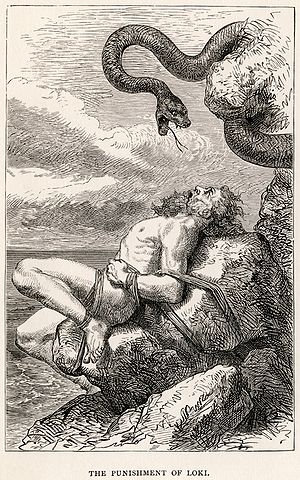 Lots of people will tell you that Elder Futhark, the old Runic alphabet, had a rune for Loki. However, some say it was Dagaz

and some say it was Kenaz

, and one other answer here (unique to the Internet, as near as I can tell), says it was Berkanan (ᛒ).

You may have moved waaaaay past this given that you asked 2 years ago, but here's a different answer: Yes, and the rune he is associated with is Berkanan. In fact, in the Elder Futhark Loki is specifically named in connection to this rune. The poem is real, and can be verified by Icelandic scholars.

The Norse did not use symbols. They were primarily oral people that did not use writing. Writing was often seen in Norse culture as something for "wizards" or other evil beings. The vast majority of Norsemen during the viking period were completely illiterate.

For a modern-day, literate person, the logical symbol for Loki would be mistletoe, a sprig of which Loki used to kill Baldur by the hand of Hodur, his brother.

Also, many modern fictional representations of Loki show him with an elaborate horned helm, so you could use that too.

A couple of posts have suggested that Loki was associated somehow with particular runic letters. This idea is absurd and untrue. Neither is there any evidence for this idea, nor does it make any sense in a cultural context. Loki is mentioned in one of the rune poems, but to infer from this that the letter involved was his "symbol" is not sensible.

There's a talisman that's supposed to be used to help with cunning ability (a very Loki trait if I say so myself) I can remember the name of the talisman, but it's two snakes intertwined. Ururs? I can't remember. I use it to represnt Loki when I need to summon up my cunning

13
What was the ancient Jewish pantheon?
4
Epoch of an item marked with anchor symbol with the letters N and D
7
Are there any written records of Norse mythology dated prior to Christianization?
13
Why didn't early modern Christians object to pagan symbolism in art?
4
Did ancient and/or medieval cultures that emphasized the danger of religious pollution also exert more control over women?
21
Did horse sacrifice persist in Christian Europe?