What were all the countries of the First, Second and Third Worlds, when WWII ended? [closed]

What were all the countries of the First, Second and Third Worlds, when WWII ended?

That is, using the World terms in their Cold War formulation.

The First World was all the capitalists

The Second World was all the communists

The Third World was all the neutrals.

What I'm wanting is a list of all countries under their World numeration, as they would have been evaluated immediately after WWII.

The phrase "Third World" was first coined in 1952 by Alfred Sauvy, so asking "what were the countries in each 'world' at the end of WWII" is a bit of an anachronism. It's also a bit fraught to ask whether Poland or East Germany should have been viewed as communist countries immediately after WWII, before the Soviet-backed communist parties in each country had fully consolidated their power. (It sure seems like we should in hindsight, but this was not as obvious at the time.) And, of course, most countries in Africa were not independent at this time. Despite these difficulties, though, we press on.

Sauvy's original article, a bit surprisingly, does not appear to be available online in English; but it is available in French. He doesn't carefully define what he means by "First World" or "Second World", since his focus is on the "Third World". Here are some pertinent excerpts (bolding mine):

which translates roughly as:

We talk freely of two worlds in existence, of their possible war, of their coexistence, etc., forgetting too often that there exists a third world, the largest, and really the first chronologically. This is the group of those countries that the United Nations calls underdeveloped. ...

What matters to each of the two worlds is to conquer the third, or at least to have it on its side. And from there comes all the problems of coexistence.

The capitalism of the West and the communism of the East bear on each other. If one of them disappeared, the other would suffer an unprecedented crisis. The coexistence of the two should be a step towards some common regime as distant as it is unclear.

From this it would seem that the three worlds are defined as:

In particular, I strongly suspect that Sauvy would have viewed Ireland, Sweden, Switzerland, Finland, and Austria as "First World" countries, even though they were not part of NATO. I also suspect that he might have viewed China as "Third World", even though it had a communist regime, since it was not at all industrially developed in 1952.

The original Three World Model appears to have come from a demographer in the 1950's. In his mind, it was essentially 1 - NATO, 2 - Soviet Block, 3 - Everyone else.

The end of the Cold War removed almost the entire "Second World" from existence. So today I believe most people instead use the terms to separate developed nations from less developed nations. But there's no "authority" anywhere that could give you an official ruling on the membership of countries like Turkey or India that could be argued either way.

If you want a full list of who was what when the concept was first coined, that would be the memberships of NATO (and probably other US alliances like ANZAC), the Warsaw Pact countries, with everyone else technically being "third world".

Here's a map showing the first two at their contact point in Europe. To backdate it to the end of WWII, you'd probably want to add Yugoslavia and Austria to the 2nd World. Outside of this map, the 1st World needs the USA and Canada from North America, and Japan, Korea, Australia, and New Zealand from the Pacific area. The 2nd should (arguably) add China and eventually North Korea and Cuba. 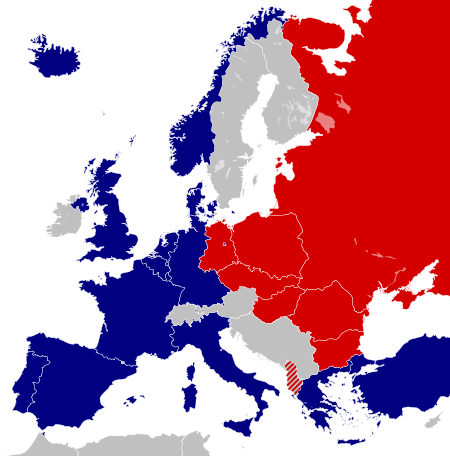 Not the answer you're looking for? Browse other questions tagged cold-war or ask your own question.

4
How independent were the Eastern European countries from the Soviet Union?
54
Why was Spanish Fascist dictatorship left in power after World War II?
4
What access did people in the Warsaw pact countries have to Western television and radio?
10
What transit restrictions were in place in Occupied Germany limiting military and civilian movement between the four occupation zones?
4
What restrictions were in place after WWII on the German aircraft industry?
5
What were the international space arrangements and scientific purposes Eisenhower spoke of in October 1957?
4
What was the Soviet plan to respond to a nuclear first strike post WW 2?
8
What options were available to MacArthur to prepare for Chinese intervention in the Korean War?