Why did India use Soviet military hardware during the Cold War?

A former British colony, I'd have thought that India would use Western military hardware during the Cold War. In fact, they fought shoulder-to-shoulder with British soldiers against the Japanese. India was a natural ally of the West.

One explanation I can think of, silly as it might sound, is:

After World War Two, the US sold weapons to Pakistan. India purchased Soviet military hardware to spite the Americans.

If I remember correctly, Nehru had several communist sympathies -- or at least, was very tied into and involved with the Soviet Union. Also the U.S. had, in the post-Nixon era, greater ties with China, and hence the Soviets were open to trade with India.

Of course, politically, India were quite foundational in the Non Aligned Movement, which spared it from much of the political angst of the West.

Noteworthy to this effect, is the brief (one of the shortest in history) Portuguese-India war (can't remember the exact name), over the colonial possession of Goa, a short while after independence. During the ensuing panic meeting in the UN over the invasion of Portuguese holdings, the primary defender of India in the UN Security Council was in fact the Soviet ambassador, who consistently used its veto power to protect India from UNSC action.

Adlai Stevenson, the American ambassador, on the other hand, adhering to the philosophy of postwar idealism in international diplomacy, condemned India's actions, asserting that they should have instead sought recourse through peaceful means.

It appears that from independence, the Soviets were eager to capitalize off of open markets in India, and consequently were inclined to make political friendships with Nehru (who was eager to reciprocate). The US and the West had less of an inclination to do so, seeking markets in other developing countries.

Perhaps the development of a consumer culture in the West helped encourage this inclination-- while American businesses and consumers enjoyed a prosperous ecosystem, the Soviet-style communist system operated differently, and perhaps there was a greater desire for foreign markets there than in America, where the domestic market was promising enough for many businesses.

Also, the Soviets had more to gain in spreading their ideology to India, which from its inception was a bastion of democracy. The US had less of a fight to preserve capitalism/democracy there. Had India gone communist, it would have been a big win for the USSR.

But the US was fairly confident in India's post-Independence culture and economy, so had less of an impetus to fight a war of economics there by actively encouraging trade abroad in that particular country. And, heck, it would seem the Soviets got somewhere, with the communist party in Bengal still being a political force to this day.

Two of India's enemies, China and Pakistan were allied, beginning with the Chinese invasion of the Kashmir in 1962. Later, beginning in the 1970s, the U.S. "tilted" toward China.

A Soviet Union-Indian "rapprochement" was the natural counterweight. "The enemy of my enemy is my friend."

It's certainly true that the Soviet Union cultivated friendly relations with India from the accession of Khrushchev onward (Stalin seems to have viewed India as basically an agent of the West, despite its independence), including significant amounts of foreign aid. Khrushchev visited India in 1955, following a visit to the Soviet Union by Nehru earlier that year, and announced Soviet support for Indian sovereignty over the disputed territory of Kashmir and the still-Portuguese enclave of Goa. The Soviet Union also maintained a pose of neutrality during the Sino-Indian border dispute of 1959 and the Sino-Indian War in 1962, despite their alliance with China. Soviet-Indian relations continued to improve after the Sino-Soviet break in the mid-1960s, since India considered China its main threat and the Soviet Union was now antagonistic toward China (the Sino-American rapprochement in the early 1970s no doubt furthered this).

From what I can, however, large-scale Indian purchases of Soviet weaponry didn't really begin until the mid-1960s (after the time of Nehru); prior to that, their weapons were primarily British and French. The change came from a desire to modernize and expand the Indian military, particularly following the defeat of the Sino-Indian War. This came at the same time as a period of economic hardship and a shortage of hard currency, which made it difficult to buy Western arms. (A US/British arms embargo against both India and Pakistan during the 1965 Indo-Pakistan War didn't help, either.)

The Soviets offered to sell India weapons in exchange for rupees, with generous credit and finance options (e.g., a seven-year grace period before the beginning of actual payment, followed by a 17-year payment period with only 2.5% interest). They were also willing to negotiate the licensed production of Soviet weapons in India, allowing some technology transfer; some Indian defense officials hoped this would help India develop its own arms industry. (India did acquire some Western arms via similar licensing deals.) The fact that Soviet weapons were almost always cheaper than Western equivalents, even without the generous credit and financing arrangements, probably helped as well.

(My understanding is that the Indian military remained biased towards British and other Western weapons for some time; e.g., the Indian Air Force preferred the US-made F-104 over the Soviet MiG-21 in the 1960s, but was overridden by the Defence Ministry on the basis of economics and the prospect of technology transfer.)

The Indians followed a policy of non-alignment which meant that the republic of India would not ally with any of the two power blocs during the cold war. Nehru was witty enough to use the USSR and the US to make a young country like India more developed. Examples of such usage are prominent. The setting up of the Bhilai Steel Plant with the help of the USSR and India getting American support during the Sino-Indian war as the Americans wanted to suppress communist victory. The buying of Soviet military hardware had the same motive.

Question:
Why did India use Soviet military hardware during the Cold War? (... given India was a former part of the British Empire).

I don't think India in the 1950 - 70's would have expressed the fondness for the British colonial period as your question implies. The Soviet Union and then Russia and India have long maintained close relations, including today. During the cold war India was the largest Soviet client state. source 1 By that I mean India was the largest recipient of Soviet military and economic aid. 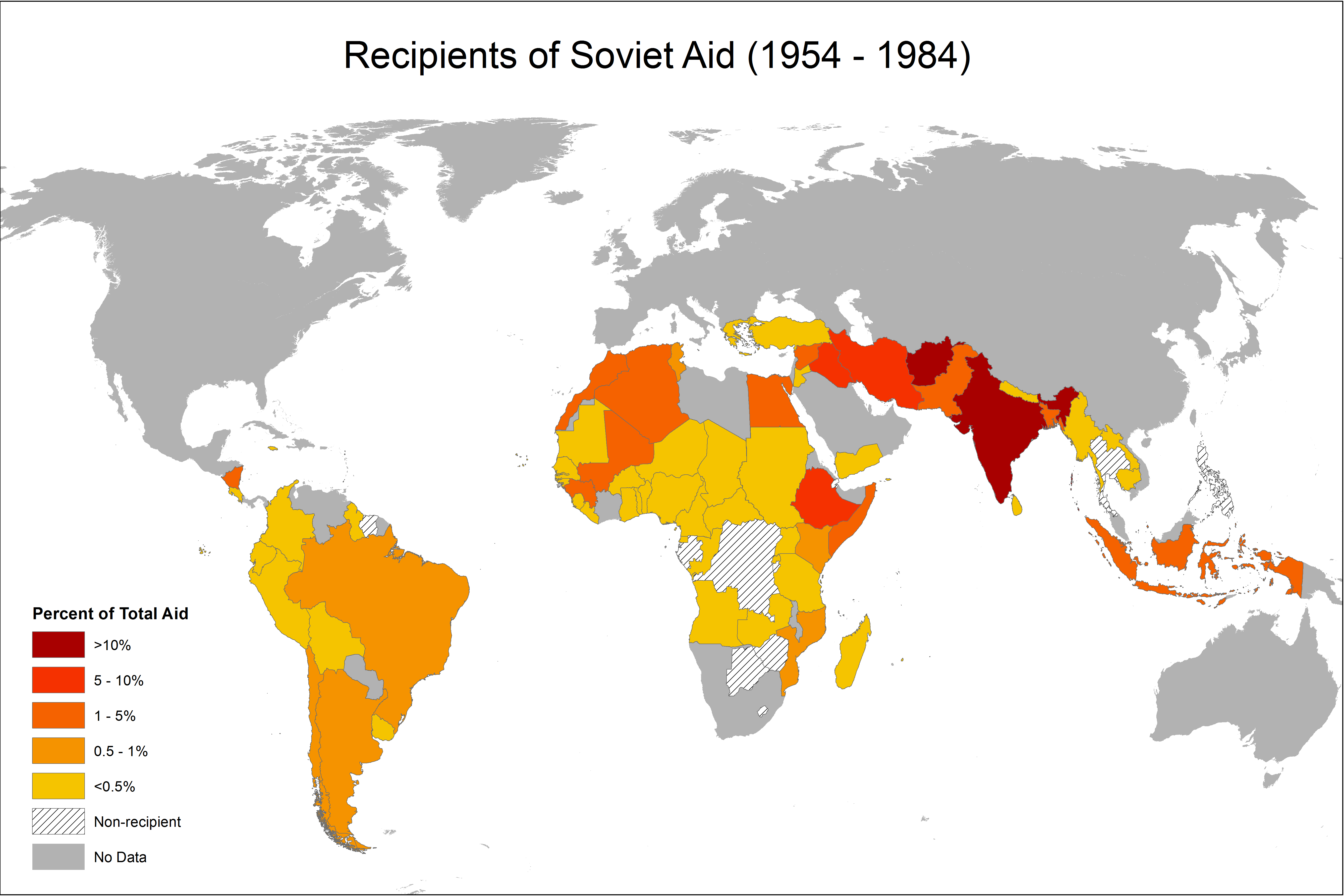 Dmitry Medvedev, Relations with India have always been and I am sure will be one of the most important foreign policy priorities of our country. Our mutual ties of friendship are filled with sympathy, and trust, and openness. And we must say frankly that they were never overshadowed by disagreements or conflict. This understanding - this is indeed the common heritage of our peoples. It is valued and cherished in our country, in Russia, and in India. And we are rightfully proud of so close, so close relations between our countries.

Pratibha Patil, We are confident that India lives in the hearts of every Russian. In the same way, I can assure you that Russia also lives in our souls as a Homeland, as people who share our emotions, our feelings of mutual respect and constant friendship. Long live our friendship!

Pranab Mukherjee ...India-Russia relationship is one of deep friendship and mutual confidence that would not be affected by transient political trends. Russia has been a pillar of strength at difficult moments in India's history. India will always reciprocate this support. Russia is and will remain our most important defense partner and a key partner for our energy security, both on nuclear energy and hydrocarbons,

India was the largest Soviet client state of the cold war. Interestingly India was also one of the leaders along with Yugoslavia of the non aligned movement which tried to stay neutral between the super powers. India received more military and economic aid from the soviet union in the 60's than did Communist China. As you can imagine this was a point of contention for Sino-Soviet relations given China and India fought a war in October 1962 over boarders in which before and after India was receiving all that aid.

India was probable the soviet unions greatest success story in the soviet's agressive attempts to foster closer relations with the third world. In exchange for the support and aid the Soviet's gave India, India reciprocated with it's own support for some of the Soviet's controversial actions.

Not the answer you're looking for? Browse other questions tagged military india cold-war pakistan or ask your own question.

13
What was the Soviet role in Syria during the Cold-War?
11
What documented criteria (if any) did the CIA use to determine targets for political assassination during the Cold War?
8
Why did India choose August 15th as its Independence Day?
3
Did USSR ever consider invading West Germany during the Cold War seriously?
2
Why did India release all Pakistani Soldiers captured during Indo Pak War 1965
5
Why did India sign the Indo-Soviet Treaty of Friendship and Cooperation?
5
Did the US military just kill more Russians in Syria than they ever did during the Cold War?
2
What prevented the Indian Army to wrest Kashmir from Pakistan despite the UN Security Council's resolutions of 1948-49?
0
Was the danger of radiation in the case of nuclear war overestimated during the cold war?