When did blade fuller appear?

A fuller is the rounded or beveled groove or slot in the flat side of a blade which make the blade lighter -- not as some suggest a blood groove. When did the practice start? I suspect it was a parallel discovery but could be wrong.

It seems that Roman spathas sometimes already had fullers: 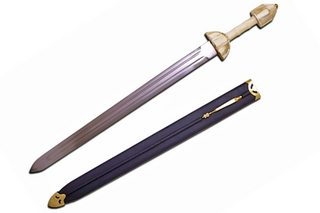 But as this form was an adaption of a Celtic design of the La TĂ¨ne culture:

The second type, not very different morphologically speaking, does not have the solid shape of the first type, but a longer blade, with a fuller, and keeps, most often, the haft's tongue short and of a triangular shape.

The third type, more numerous, gathers a series of daggers characterized by a long blade, elegantly manufactured in most cases, by the ornamentation with incised circles and/or lines along the blade, the presence of the fuller, the haftâ€™s tongue as long as the haft and a guard muff. These distinctive elements are found either all together, or some of the pieces present one or more of these characteristic features. The sizes show a relative standardization, somewhere around 30â€“40 cm length and approximately 3 cm width. From a chronological point of view, this type of dagger is dated mostly in the 2nd and 1st centuries BC.

But when did it first appear? Very early it seems, out of necessity: 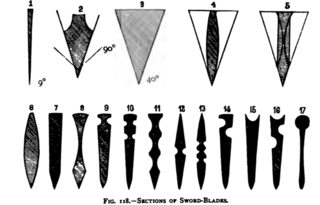 The first form (fig. 1 18) is the wedge that would be produced by taking for base the dorsal thickness of an ordinary blade, and by continuing it in an even line to the apex of the triangle â€“ the point. The two sides meet at an angle of nine degrees; consequently the edge lacks the thickness, weight, and strength necessary for every cutting tool. For soft substances it should range from ten to twenty degrees, as in the common dinner knife. An angle of twenty-five to thirty-five degrees, being the best for wood-working, is found in the carpenter's plane and chisel. For cutting bone the obtuseness rises to forty degrees, and even to ninety ; the latter being the fittest for shearing metals, and the former for Sword-blades, which must expect to meet with hard substances. But even an angle of forty degrees will be ineffectual upon a thick head, unless the cut be absolutely true. No. 2 illustrates the angle of resistance (forty degrees) and the entering angle (ninety degrees). No. 3 shows that the true wedge of forty degrees is too thick and heavy for use, requiring some contrivance for lightening the blade, while preserving the necessary angle of resistance. The remaining sections display the principal modes of effecting this object. In Nos. 4 and 6 the angle is carried in a curved and bulging line, thus giving the section a bi-convex form. When the back or base is flat this is the Persian and Khordsdni, vulgarly called the * Damascus blade.* When baseless and two-edged it is the old * Toledo ' rapier â€” two shallow-crowned arches meeting (3^, fig. 1 24). In both cases the weapon is strong, but somewhat overweighted. In the next shapes (Nos. S and 7), the two sides are cut away to a flat surface and represent the *Talwdr' of India. When this flat surface is hollowed, as by the black lines of No. S (compare No. 8), we have the bi-concave section, as opposed to the bi-convex. This hollowing of the wedge into two broad grooves from the angle of resistance is one of the forms assumed by the English 'regulation' Sword: it was considered the lightest for a given breadth and thickness, but it is by no means the strongest, and there are sundry technical objections to it.

The remaining blades in the illustration are grooved in as many different ways.

The function of the cannelure is to obviate over-flexibility; it also takes from the weight and adds to the strength. By channelling either side of a thin or * whippy * blade it becomes stiffer, because any force applied to bend such a blade sideways meets with the greatest amount of resistance that form can supply. Mechanically speaking, it is to crush an arch inwards upon its crown, and the deeper the arch the greater the resistance. Hence the narrow groove is preferable to a broader channel of the same depth. No. 9, hollowed on each side near the base, is a good old form, superior to the * regulation * (No. 8): its weak point, the space between the grooves where the metal is thinnest, lies in the best place â€“ near the back, where strength and thickness are least required. No. 10, though somewhat lighter, doubles its weak points. No. 11 is better in this respect: it has three grooves which are far shallower, and consequently the metal between them is thicker. The same remark applies to Nos. 12 and 13, which are sections of claymores, single- and treble-grooved.
â€“â€“ Richard Francis Burton :"The Book of the Sword", London: Chatto and Windus, 1884. (archive.org)

That means old Greek kopis can be found to have them:

With this in mind, the earliest metal blades with some kind of fuller are found in ancient Egypt. And I say "metal blades" on purpose, as the concept is even older than Egypt's metal working tradition: 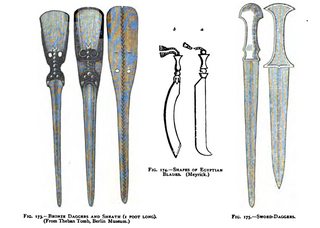 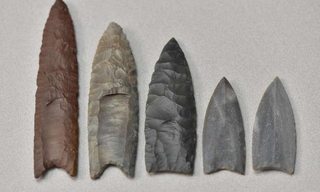 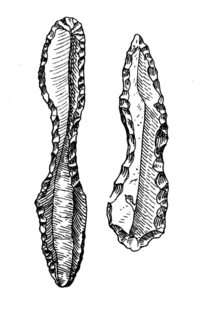 As for other types of metal swords in other cultures, also confer to Uni Kiel AMAT: Iron, Steel and Swords which is more materialistic and modern presentation than Burton.

In western Europe it seems that the grooves appeared in swords about the eighth century, according to H. R. Davidson's The Sword in Anglo Saxon England as related on this forum post.

In other areas it was probably invented independently. For instance, the Japanese have a long tradition of sword making, including fullers, and likely came up with that on their own.

19
How were small swords worn in the 18th century?
15
What is known about how many Ulfberht swords exist?
4
Did electric weapons exist in Russia in the 1920s?
1
When did hand cannons become handguns?
2
How to find out if this sword is real or just a souvenir?
8
Help on finding out about a sword