Did Albert Einstein really receive this rejection letter from the University of Bern?

I saw this image on Facebook and I usually take what's posted there with a grain of salt. I have reversed image searched and googled, but with no luck. I'm curious about the authenticity surrounding this letter. 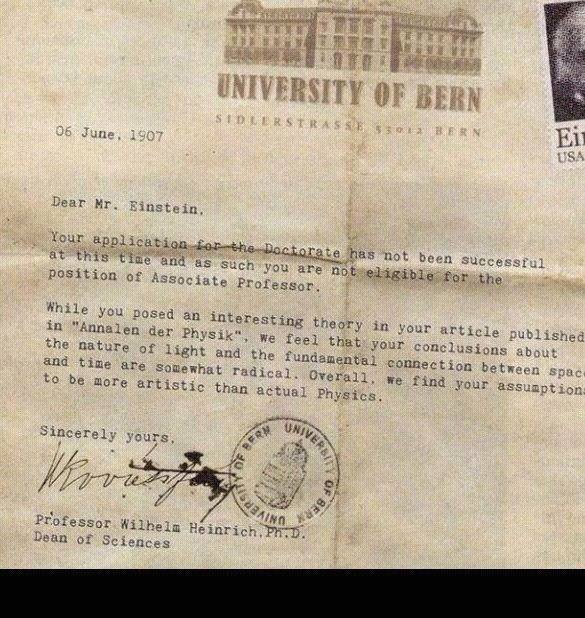 As pointed out by tohuwawohu in a comment to the question (later moved to chat), the University of Bern has publicly rebutted this as a forgery, and not even a very good one (also Internet Archive copy):

There is currently a forged letter going round on the internet. In the alleged historical writing of 1907, the University of Bern rejects Albert Einstein’s habilitation. The university archivist Niklaus Bütikofer explains which errors the forger had made and tells the true story by means of the original documents.

Some of the errors that are pointed out are laid out in a nice bullet point list:

The article also discusses signs that the letter was not written on a typewriter at all, but rather that a typewriter font was used on an image of an already folded paper. The use of Einstein 25c USA postage stamps is another sign that the letter would not be genuine, even if affixing those to the letter itself had made sense.

In summary, the alleged letter is referred to as a joke of a bored physics student by University of Bern archivist Niklaus Bütikofer.

Einstein was born in Germany, speaking German. The Universität Bern is a university in Switzerland. The local language in Bern at the time was Swiss German, the written language in use was German.

At that time Einstein published in German, as did the other German physicists.

Even today, the Universität Bern communicates with students in German, unless requested otherwise. The default language of the university website is German.

Edit: Apart from the language mistake, pretty much everything else - other than the font - is wrong too, as has been pointed out in comments and in the other answer. The original handwritten response can be translated as:

Dear Mr Doctor! The Faculty of Philosophy took into consideration your matter with regard to the habilitation in today’s sitting. As the habilitation thesis required by section 2 of the regulation on habilitation does not exist as part of your evidences, the faculty did not accept your application at this time. As soon as you submit such, we will be able to process your application. – With high esteem, The Dean G. Tobler"

Well, just have a look at the stamp: An Einstein stamp, which would mean a Phd candidate already has his own stamp. Obviously the guy who made this letter did it as a joke and was not trying to fool people.

Yes, it is obviously a very badly made fake (bolder than brass).

As already mentioned above the University of Bern would have answered in German and not in English. - Before World War I more scientific articles were published in German Language than in English and French together.

Not the answer you're looking for? Browse other questions tagged science albert-einstein or ask your own question.

5
Did Einstein really say this quote about time?
5
What was the first scientific article to give a recognisably “modern” citation to another article?
9
Since when and why do some academic publishers use, prefer or enforce endnotes instead of footnotes
13
Did any Chinese scholars propose a heliocentric model?
2
Was there any politization of “hard” science (math, physics, chemistry, biology) in the Asian communist countries?
4
Did the US really consider demonstrating the atomic bomb to the Japanese by “blowing the top” off of Mt. Fuji?