Could anyone guess what language is used in the sign made on this dagger hilt, supposedly of Persian provenance, and dated approx. 1700-1750?

A fellow translator asked if I knew, and naturally I don't know. 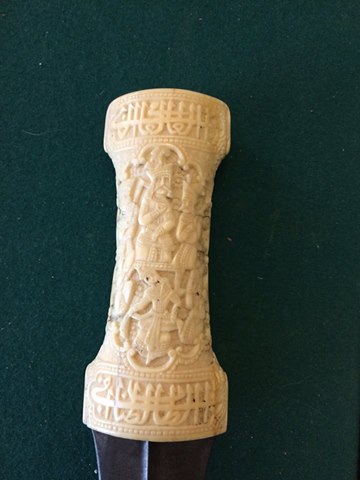 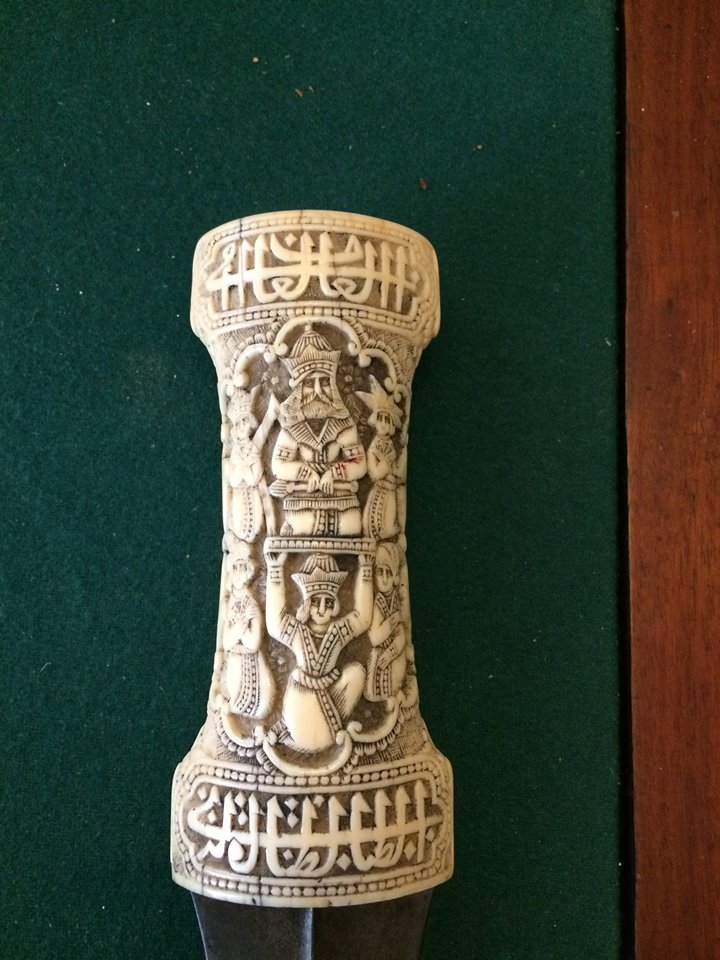 This is stylistically typical of Qajar period, Persian walrus ivory jambiya hilts. As user @Spencer noted, human figures are rarely depicted in Islamic art other than in paintings. However Qajar artworks were the exception that proved the rule, and exhibited significant European influence. Likewise, such hilts were commonly decorated with Gothic-esque reliefs, and inscribed in either Persian or less comonly Arabic, in the nastaʿlīq or taʿlīq scripts.

The inscriptions are often some relevant, cool sounding phrase. The Metropolitan Museum of Art holds one item where the nastaʿlīq inscription reads, "the handle of your dagger is world-seizing." Harvard Art Museums has one example commissioned by Aga Khan, with a ta'liq inscription that described its relief as the: "likeness of the incomparable Muhammad Shah, a heaven of grandeur, a vessel of beauty". 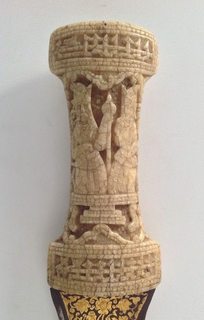 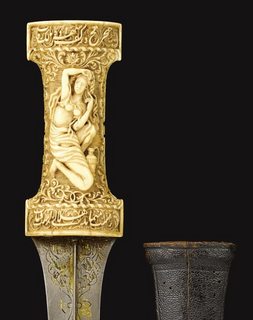 Other common inscriptions include Koran verses, prayers, or signatures by the artisans. However, it also appears that sometimes the "inscriptions" are actually just stylised scripts meant as decorations. Given that users @tohuwawohu and @moudiz said the inscriptions in the OP's images are not intelligible Arabic, this may well be the case here.

Not the answer you're looking for? Browse other questions tagged weapons middle-east islam identification art or ask your own question.

17
How were dagger axes used in battle?
14
What is known about how many Ulfberht swords exist?
7
Which regions/dynasties do the flags in this Fresco about Byzantine-Persian war represent?
6
Jerusalem 1187: How would Saladin's army have laid siege to the walls?
1
Please post a picture of the mills tonfa were supposedly used to turn
3
Can someone tell me more about this dagger with a bronze hilt?
5
What is this 18th or 19th century muzzle gun recently used in a robbery?
13
What profession(s) would have used this folding 'ruler'?
50
Is this artwork (used in a video game) real?