Virtually any time the American flag is depicted or flown, it has the orientation seen in the following image, with the stars in the upper hoist (left) quarter of the flag:

However, when the flag is displayed as a patch on the right shoulder of a military, police, or fire uniform, it's orientation is right-left reversed, as shown here: 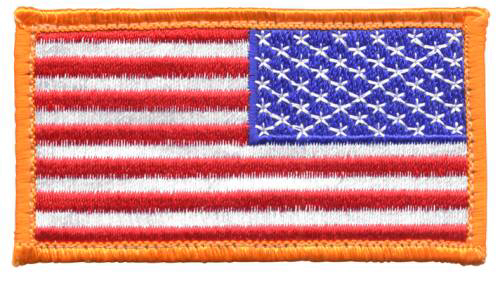 When did this reversal originate, and what is the reason for it?

This is required by US Army regulations. See Army Regulation 670–1 "Uniform and Insignia - Wear and Appearance of Army Uniforms and Insignia" PDF, p. 35:

21–18. Wear of U.S. flag embroidered insignia
a. All Soldiers will wear the full-color U.S. flag embroidered insignia on utility and organizational uniforms, unless deployed or in a field environment. Soldiers will wear the subdued tactical flag insignia while deployed or in a field environment.
b. How worn. See DA Pam 670–1.

This refers to Department of the Army Pamphlet 670–1 - Uniform and Insignia: Guide to the Wear and Appearance of Army Uniforms and Insignia PDF, p. 207:

From my military experience, the intent is that "forward" motion leads with the blue star field. In other words, the stars lead the way forward. So it depends on which side of the uniform the flag is on. On the left shoulder the blue field is on the left side of the flag, in its normal position. On the right shoulder the blue field is on the right side of the flag, so it appears reversed. In tohuwawohu's answer, this is called out in 21-18, section 2, first sentence.

Note that not all public entities adhere to this. Police departments, fire departments and so on may or may not use this practice. Even in the military I observed that there were some units that used a left-hand blue field on the right shoulder.

Civilians often wonder why the US Army Flag Patch is reversed. The answer is: not all Army Flag Patches are reversed, but only those worn on the right shoulder. The reason has to do with proper display of the flag. The blue field of stars should always be in the highest position of honor.

Happened in 1981 under John Marsh. Remember that the army was doing the crack epidemic thing and was recovering from Vietnam. Probably people were displaying the flag incorrectly and someone decided to make it official policy.

Not the answer you're looking for? Browse other questions tagged united-states military clothing or ask your own question.

4
Does the reversal of the ribbon on a military medal (South Africa / UK; WWII) carry meaning or is it simply an error?
41
What is the reason for the selections of gun caliber size in history?
26
What is the reason for: “Risk taking must focus on winning rather than preventing defeat” in US Army Operations guides?