During the Pre-Columbian period of the New World the Incas, Aztecs, Mayans, and many more civilizations roamed the land of south North America and all of South America. They were far more advanced and unified. Their government able to sustain large amounts of people. While the Native America tribes of the United States and Canada were loose bands of small groups with mostly a chief. Most of these tribes of Northern America were almost always at war with one another but their technology far less advanced.

Q: Why were Native Americans much more underdeveloped then their neighbors to the south? Was communication harder or was it the lack to develop due to always being at war?

By underdeveloped, I mean no large civilizations, no trade centers, no hubs, and how they couldn't maintain a large group of people and land.

Why were Native Americans much more under developed then their neighbors in the south. 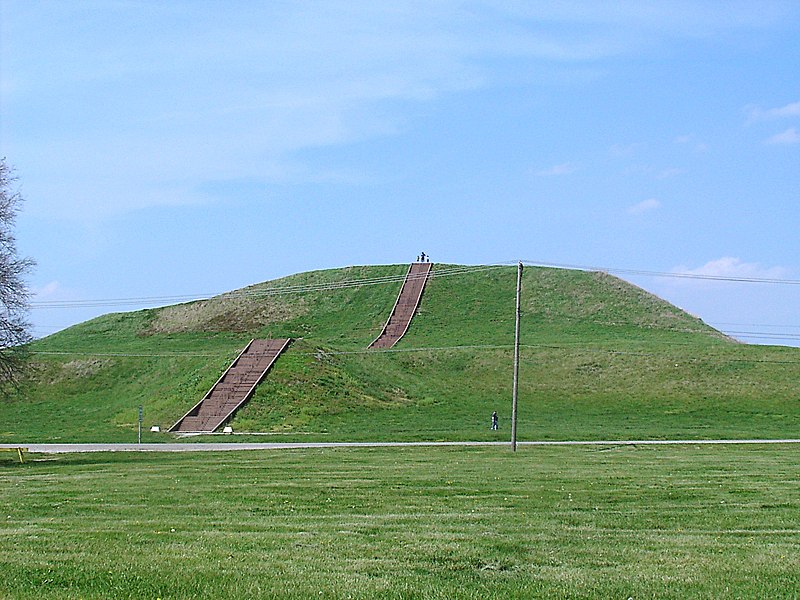 It's not quite fair to classify native North Americans as underdeveloped. The above image is of Monks Mound, a part of the Cahokia Mounds complex in southern Illinois. This mound was constructed over the period 900 to 1100 CE by a Mississippian culture. This cite is within the Eastern Agricultural Complex of North America, one of the ten or so cultures that independently developed agriculture several thousands of years ago. What is fair is that the Mississippian culture and its predecessors developed later than their counterparts in Mesoamerican and South American.

Their development was late and slow in part because they didn't have as good a base of plant life from which they could develop their agriculture as did their counterparts elsewhere. The plants domesticated in North America (marshelder, chenopod, North American squash, and sunflower) weren't as high quality as the beans, maize, and central American squash developed in Mesoamerica. Monks Mound was built shortly after the Mississippian culture had adopted key agricultural technologies that were developed in Mesoamerica.

Not sure what the rules are about this, but I had this post from AskHistorians bookmarked.

This is really a question better suited for r/AskAnthropology, as strictly speaking the field of history doesn't concern itself with cross-cultural comparisons of social evolution.

Nevertheless, I'll put on my anthropologist hat and offer you a brief answer. The social sciences as a whole have moved away from notions of "advanced" versus "primitive" cultures and instead embraced a more nuanced understanding of social development which factors in environmental, social, cultural, and religious variables which underpin how a society changes over time. Just as Darwinian evolution tells us that certain physical attributes may lead one species to be prosperous in a certain environment but falter in another environment, so too do we see that human cultures have tailor their lifeways to their environment and in turn one survival strategy may not necessarily lend itself well to a different set of circumstances. In this sense just as there are no "advanced" and "primitive" lifeforms, so too are there no "advanced" and "primitive" societies - only societies which have adapted certain advantages that make them well suited for the circumstances they face.

As counter-intuitive as it may seem from a modern perspective, sedentary agriculture did not offer many advantages to foraging/horticulture for many parts of the world prior to the Industrial Revolution. Studies have shown that hunter/gatherers typically had a more varied and nutritional diet when compared to their farming counterparts whose diet primarily consisted of a handful of staple crops. Thus life among agricultural peoples was typically characterized by shorter lifespans and more rampant disease. Furthermore as anthropologist Marshall Sahlins first observed in his famous work, The Original Affluent Society, a hunter-gatherer lifeway generally involves far less work than agriculturalism.

There are two crucial takeaways from these realities. First, that from the perspective of a hunter-gatherer the adoption of a sedentary lifestyle offered limited appeal. After all, why change your whole society just to work harder and suffer more, particularly if you are already happy? There is a subtle aspect to that dilemma that is easily lost on laymen because to the modern reader, agriculture seems like a fairly straightfoward system. For the perspective of someone living through the Neolithic Revolution however, it is nearly impossible to overstate how demanding and challenging it would be to redefine a society to allow for agriculturalism.

For the vast majority of human history, we humans have been hunter-gatherers and by extension mostly egalitarian. Hunter-gatherer societies are overwhelmingly devoid of strict hierarchies and inequality primarily because the notion of private property (not to be confused with personal property) was non-existent in such cultures and did not develop until agriculturalism did. Formalized hierarchies develop in part as a response to the issues that surround property ownership. For example, there must be some sort of cultural justification for the division of property, a mechanism through property disputes are reconciled, a set of agreed upon values and behaviors which facilitate trade, etc. The functional necessities which go hand in hand with agriculturalism take a considerable amount of social upheaval to achieve and without a serious incentive or pressure to pursue that change, human societies typically didn't bother with it.

This in turn leads us to our second takeaway, which is that agriculturalism is adopted as a result of some type of need. Whereas people living at more northern or southern latitudes generally enjoyed a stable climate which allowed for plentiful edible plants and large numbers of game animals, equatorial peoples had to grapple with climates that were not as conducive to hunting and gathering. In this respect we see that in an equatorial environment agriculture was more reliable than hunting and gathering. Mesoamericans recognized the benefits of physically creating spaces where plant life could thrive and due to the time and energy invested in creating these spaces, were compelled to settle particular areas and radically redefine their cultures.

This of course shouldn't be confused with the environmental determinism of thinkers like Jared Diamond, who wrongly assert that geography dictates how a culture develops. While the broad brushstrokes I've outlined here explain some of the pressures that lead a people to develop agricultural lifeways, they by no means embody a mechanistic explanation for social development. In the case of Mesoamerica, many hunter-gatherer societies existed long after agriculture emerged in the region and thrived along side the area's most powerful empires. Often times the adoption of sedentary culture came not as a result environmental pressures but rather social ones. Violence between hunter-gatherer peoples can displace populations and in turn lead them to pursue a lifeway that doesn't (immediately) involve a competition with other nomadic peoples, while violent agricultural societies can simply make the perpetuation of hunting and gathering inefficient. Outside of the Americas, there is a growing body of scholarship which suggests that purely religious factors can spur the development of social complexity and by extension sedentary culture. The construction of the religious complex now known as Gobekli Tepe would have required many of the cultural mechanisms and attributes which make sedentary life possible and could have potentially lead its builders to pursue agriculture for reasons not implicitly tied to survival.

I am running out of time here, so lets return to your question. I've outlined the general factors that define a society's relationship to agriculture which strictly speaking doesn't answer your question. The reason why agriculture is so important to this discussion is that agriculture doesn't just create property and formal hierarchies - it also leads to the development of specialization. In anthropological sense, specialization essentially means that each individual in a society has a dedicated task or function they are expected to perform. The keywords there are dedicated and expected. While hunter-gatherer societies do have a degree of specialization, social roles are frequently more fluid among hunter-gatherer peoples than among their agriculturist counterparts.

An individual in a hunter-gatherer society is going to participate in just about every task their community performs, whereas an individual in an agriculturist society may never learn how to say - work metal or mine limestone. The eventual development of highly specialized social roles allows a culture to innovate more quickly, as a specialist will spend vastly more time refining their production techniques or working through the problems related to a task than a person who needs to perform that task as well as several others. There are of course others variables which come into play here (market pressures, social values, wealth inequality) but generally speaking the nomadic peoples of North America did not have the same degree of specialization as their southern neighbors; which itself was the result of absence of any real reason or desire on the part of northern peoples to pursue agriculture.

A final note here. Setting aside the question of whether or not a culture embraces agriculture, the time it takes for a culture to become sedentary is often tied to whether or not it has agriculture neighbors. While a culture that develops agriculture independently must figure out solutions to all the problems that comes along with it alone, a hunter-gatherer culture which routinely interacts with an agricultural society can emulate their neighbors and transition more quickly to the agriculturalist lifestyle. While by no means the only staple crop of the Native American agriculturalist, maize does offer some insights into the spread of agriculture. Archaeological research suggests that maize was first cultivated in the American Southwest sometime around 2100 BCE. In contrast, maize was first cultivated in Mesoamerica sometime around 5000 to 7000 BCE. This means that the peoples of Mesoamerica had considerably more time to develop the cultural attributes I have described above and consequentially more time to develop the characteristics you probably associate with an "advanced civilization".

Too much land. The population density in South and Central America (about 6 million for the Aztecs) was much higher than in most of North America (500,000 for all of Canada). Having too little population means that people within the society are unable to specialize, and trade becomes harder to conduct for less gains.

The copper that was used in Greece during the Bronze age originally came through Syria from Egypt, and then later from Cyprus. While tin was imported from Spain and Eastern Germany. Very few places have all the resources they need to run a prosperous civilization within the reach of a single population. If people are not allowed to specialize and do not have the ability to trade for materials than technological advancement becomes near impossible.

In addition to the answers above, another reason for this difference in advancement could be climate. An event called the Little Ice Age happened from 1300 onwards, leading to food shortages in many Native American cities in North America and hampered their ability to create larger urban centers and harness agricultural advances that help with the development of societies. Combine this with the lower quality of domesticated vegetation in North America mentioned above and you have a civilization less advanced than its southern counterparts. The Little Ice Age had little to no effect on the Native Americans living in South and Central America.

For the record, North American Native Americans did have accomplishments, such as the domestication of cranberries, the toggling harpoon, and mound-like pyramids. 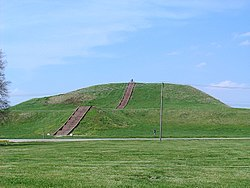 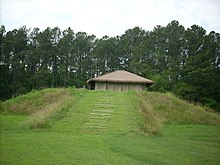 Not the answer you're looking for? Browse other questions tagged ancient-history technology native-americans north-america south-america or ask your own question.