Why did Emperor Xian's flight from Chang'an take one year?

During the end of the Han dynasty, the capital Luoyang fell under the control of the warlord Dong Zhuo who, fleeing a coalition of lords against him, burned it and moved the young Xian Emperor to Chang'an. After Lu Bu assassinated Dong, Chang'an fell under the control of the warlords Li Jue and Guo Si, who fought each other soon afterward. The emperor escaped and eventually reached the ruins of Luoyang. According to Chinese Wikipedia (and other sources), this trip took one year:

Later, Li and Guo fought each other, the people fell upon hard times, and the Xian Emperor fled Chang'an with a group of courtiers on July of the second year of Xingping (AD 195). On this trip, on multiple occasions they became the target of capture by Li Jue, Guo Si, Zhang Ji, Yang Feng and other warlords.

The Xian Emperor of Han and his courtiers finally reached the old capital of Luoyang after a year in July of the first year of Jian'an (AD 196). 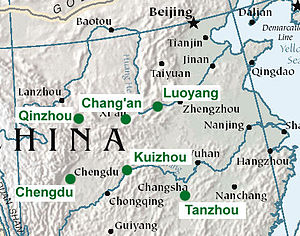 Although the trip passes through difficult terrain and a few mountain passes, it is also a key artery in the empire and very well travelled. The trip shouldn't take anywhere close to a year under normal circumstances.

So why did it take emperor Xian one year? What were they doing? What happened during this trip?

July 195: The emperor departed Chang'an via the Xuanping Gate. After being briefly stopped by Guo Si's men (who retired when the emperor told them off), they arrived at Baling that night. Later, Guo Si wanted everyone to go to Gaoling, but the ministers and Zhang Ji thought Hongnong was more appropriate.

August 195: Travelled to Xinfeng. Guo Si repeatedly told the emperor he wanted him to return to Chang'an, but failing, he went with his troops to the southern mountains.

November–December 195: The emperor reached Hongnong. Li Jue, Guo Si and Zhang Ji went in pursuit. There was a battle at Dongjian where the emperor's generals Dong Cheng and Yang Feng suffered a defeat, with many officials and soldiers killed. Dong Cheng and Yang Feng sent for assistance from the White Wave leaders Li Le, Han Xian and Hu Cai, as well as the Xiongnu "prince of the right" Qubei. Together, they defeated Li Jue and the others, killing thousands.

They resumed the journey east, with Dong Cheng and Li Yue accompanying the emperor while the rest served as a rearguard. Li Jue pursued and inflicted a defeat similar in scale to that at Dongjian. Amongst those killed or captured and executed were Minister of the Masses Zhao Wen and six of the Nine Ministers. The Huben ("Energetic Tiger") and Yulin ("Feathered Forest") imperial guards numbered fewer than 100 men after the defeat. The emperor crossed the Yellow River, losing more followers along the way.

The emperor reached Dayang, where Li Le had his camp. He then proceeded to Anyi in an oxcart. The prefect of Henei Zhang Yang was one of those who provided assistance. Later, he came from Yewang and suggested that the Emperor go to Luoyang, but as the Emperor's generals would not agree, Zhang Yang returned to Yewang.

January 196: Dong Cheng and Zhang Yang wanted the emperor to return to Luoyang, while Yang Feng and Li Le opposed.

February 196: Han Xian attacked Dong Cheng, who went to Yewang. Han Xian was stationed at Wenxi, while Hu Cai and Yang Feng were at Wuxiang. Hu Cai wanted to attack Han Xian but the emperor ordered him not to.

February-April 196: Zhang Yang sent Dong Cheng ahead to rebuild the palace in Luoyang (Dong Zhuo had sacked it in 189).

May 196: The emperor went to the camp of Yang Feng, Li Le and Han Xian, asking them to take him to Luoyang.

It is entirely possible.

Not the answer you're looking for? Browse other questions tagged ancient-china travel historical-accuracy 3rd-century or ask your own question.