How did Moldova and Romania become separate in the first place?

I've read this question about why Romania and Moldova don't unite.

How did they become separate in the first place?

Since they are two adjacent countries with basically the same language and ethnicity*, I assume they were once a part of the same nation? If yes, what nation were they united under? For what period of time were they united before splitting? How did the split occur?

I'm aware that they were unified between 1918 and 1940. However, surely that relatively recent, short union is not the answer. There must have been some period further back in history where the two nations were one?

* = In this assumption I consider (perhaps simplistically) Moldavians and Romanians to be a single ethnic group since they speak the same language and share common ancestry and culture. While there are probably differences between the two groups, they do seem to have a lot in common, more than other pairs of groups that are considered to be one ethnicity do.

I am also aware that the minority populations differ in the two countries. Moldova seems to have more people descending from former Soviet republics, while Romania seems to have more Hungarians and Romani people. However, my assumption is regarding the majority ethnic group, the Moldavians/Romanians.

First of all a simple clarification of terminology (with some more details farther below), but that needs to be put forward:

The OP says: "Since they are two adjacent countries with basically the same language and ethnicity, I assume they were once a part of the same nation? If yes, what nation were they united under? For what period of time were they united before splitting? How did the split occur?"

I think that the question raised and the Tom Au's answer suffer from a confusion that needs clarification. It's a confusion about the very terms involved (Moldavia, Moldova, Romania) and even about the historical background.

First, it is not evident that two states that share the same ethnicity must have been in the past part of the same unified state. It is the unified modern state that may be based on common ethnicity of former separate states. Such is the case with some European states, like Italy and Germany. Romania follows this trend and was created in the same period through the unification of Wallachia and Moldavia. On the other hand, the modern states of Romania and Moldova were at some point united; that is, present Republic of Moldova covers a territory that in the past was part of the principality of Moldavia which itself became part of Romania.

Therefore I will list the main historical data that I hope will both clarify the question and provide an answer as to why the states involved became separated at some point. Also, the maps in the posted links will greatly help clarifying things.

Romania is the name of the modern state created with the 19th century unification of two older separate entities: the "principalities" of Wallachia and Moldavia, which in the 18th century started being called the Danubian Principalities. - Only in 1918 it integrated also Transilvania, then part of Hungary, to cover largely the territory of the three principalities that in 1600 had been for a very short period under the personal union of the Wallachian prince Michael the Brave. 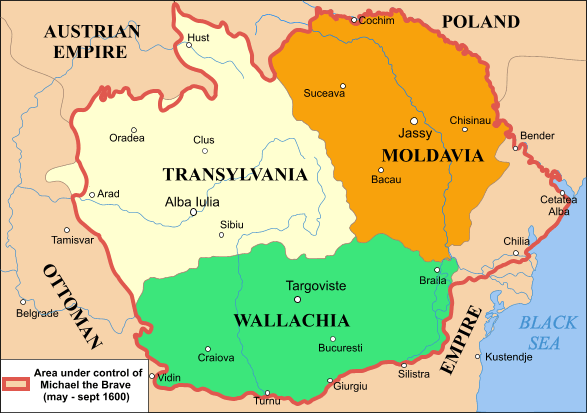 [By Anonimu at the English language Wikipedia, CC BY-SA 3.0, https://commons.wikimedia.org/w/index.php?curid=706080]

Wallachia and Moldavia appeared on the map of Europe as separate entities ruled by separate dynasties, but they were very similar:

Republic of Moldova (sometimes simply called Moldova) is a recent state which became independent at the fall of the Soviet Union largely on the territory between the rivers Prut and Dniester that was part of the principality of Moldavia and was occupied in 1812 by the Russian empire. This territory started to be called Besserabia when it became disputed and caught the attention of European geographers, but the name doesn't reflect any previous separation from the rest of Moldavia. Unlike the previous Turkish domination, Russian occupation meant full integration into the empire with the creation of a governorate, which didn't mean local autonomy as much as a politics of Russification and colonization. (The main part of the country, the capital, most of the main cities and the main population were on the western side of the Prut river and by the unification with Wallachia became a new state: The United Principalities of Moldavia and Wallachia, as a personal union in 1859, full union in 1862, and then the Kingdom of Romania in 1881.) After the First World War and the Bolshevik Revolution, Romania occupied the territory of the Besserabia Governorate. Soviet Union took it back after World War Two and created the Moldavian Soviet Socialist Republic. 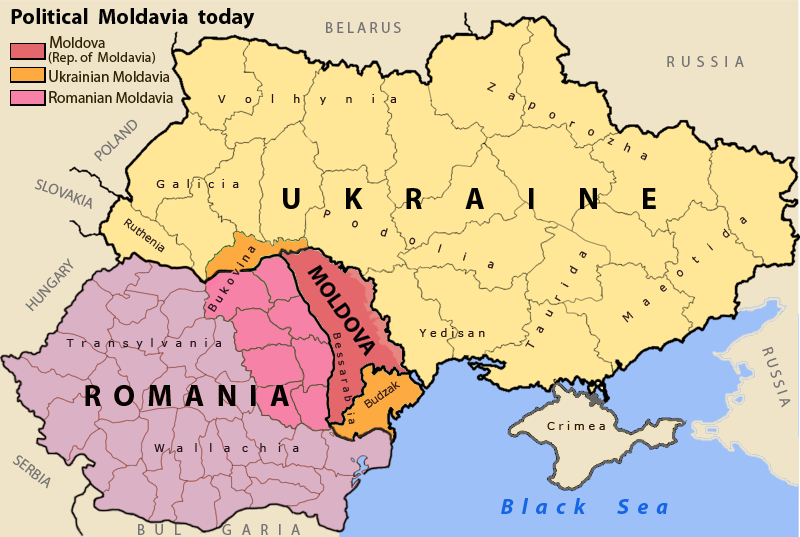 And now I'll try to formulate an answer to the initial question "how the two have become separate in the first place".

Why the two older principalities of Wallachia and Moldavia have existed for so long as separate states? Because they had been created separate, just like the German or the Italian states. They might have been united earlier if they had been stronger. (In 1600 a Wallachian prince was strong enough to create a personal union for a short moment.) Keeping their relative independence was already a task that took all available resources for hundreds of years. When the immediate pressure from powerful neighbors like Russia, Austria and Turkey receded through the intervention of France and England and through the logic of European equilibrium (after the Napoleonic wars) new conditions for independence and unification have appeared. These conditions improved further after the Crimean War, when Turkish and Russian intervention was replaced by the more distant French and British influence, which opened the path to unification.

Why Romania and the eastern part of Moldova (Besserabia) were separated in the first place? Because at the moment when the modern Romanian state was created by the unification between the Wallachia and Moldavia (1859), the present territory of the Republic of Moldova (the eastern part of Moldavia) had been already taken by Russia (1812). Unlike other territories under Russian rule, namely Poland or Finland, this was not really an entire country and was not treated as such, but underwent a process of colonization and Russification. As an ally to the WW1 victors, Romania regain control of this territory in 1918-1919 but then lost it again to URSS in 1945.

As for the question why are they not united now, there is a question with rather good answers here.

The reason appears to be that Moldova "traveled" with an adjacent region called Bessarabia.

Romania and Moldova were under "common" rule for several hundred years, but only under the Ottoman Empire. There was a lot of "back-and-forth" in the 19th century between Russia, the Ottoman Empire, and the locals. In 1859, when Romania (basically Wallachia) obtained nominal independence from the Ottoman empire, Russia occupied Bessarabia, and claimed Moldova. In 1878, during the Congress of Berlin Romania ceded Moldova to Russia in exchange for access to the Black Sea (the northern Dobruja region).

Romania "outlasted" Russia in World War I, and was able to recover Moldova and Bessarabia after the war. The Soviet Union seized them back in 1940. Romania recovered them both for 1941-44, and lost them back to the Soviets.

I'm going to try to clarify this stuff from the beginning, since I see a lot of inaccuracies/misinformation in the previous answers (sorry guys!).

In short, while Moldova did decide to unite with Wallachia in 1859 to form Romania, it did so while missing its eastern part (which had been annexed by Tsarist Russia some decades earlier).

tl;dr Moldavia fragmented along with the Habsburg empire and in the context of conflict between the Russian and Turkish Empires. Ultimately the Treaty of Paris codified the two countries. After a personal union, diplomatic pressure forced the establishment of two separate countries.

. . . [The Paris Convention] failed to note whether the two thrones could not be occupied by the same person, allowing Partida Naţională to introduce the candidacy of Alexandru Ioan Cuza in both countries. On January 17 (January 5, 1859 Old Style), in Iași, he was elected prince of Moldavia by the respective electoral body. After street pressure over the much more conservative body in Bucharest, Cuza was elected in Wallachia as well (February 5/January 24). Exactly three years later, after diplomatic missions that helped remove opposition to the action, the formal union created the United Principalities (the basis of modern Romania) and instituted Cuza as Domnitor (all legal matters were clarified after the replacement of the prince with Carol of Hohenzollern-Sigmaringen in April 1866, and the creation of an independent Kingdom of Romania in 1881) - this officially ending the existence of the Principality of Moldavia. source Emphasis added

Last time when Romania lost Moldova (East part) was in 1940, after the Ribbentrop-Molotov pact, when Baltic countries, East parts of Poland and Romania were offered to Russians. This part of agreement was putted in an annex of the agreement. As a result, Bolsheviks invaded Baltic countries and East Poland and forced Romania with an ultimatum to cede East part of Moldova. The king of Romania wanted to avoid a war and ceded the territory. The WW2 was only temporary change of possession.

Today, Romanians blame Germany for the lost of East territories.

Not the answer you're looking for? Browse other questions tagged romania moldova or ask your own question.

65
Why did the USSR give Crimea to Ukraine?
35
Why didn't Moldova unite with Romania?

35
Why didn't Moldova unite with Romania?
6
Is this theory on origins of modern-day Romania plausible?
34
Why did modern "Romania" remain the most "Roman" part of the Balkans?
30
Why does Romanian culture have Latin influences?
9
In the "Immigrationist theory" of Romanians (Vlachs), how did they became the vast majority in Transylvania?
7
How did Ceaușescu survive the condemnation of the invasion of Czechoslovakia in 1968?
13
Why do some 17th and 18th century maps depict Ottoman sanjaks north of the Danube in Wallachia?