Why was Calcutta a node in the opium smuggling network prior to the Opium Wars in China?

As per Wikipedia's History of Kolkata page:

After the territorial conquest of Bengal in 1757, the British East India Company pursued a monopoly on production and export of opium from India. The company bought opium from local traders and later directly from farmers, and sold it at auction in Calcutta. From there much of it was smuggled to Canton in China by foreign traders, eventually leading to the First Opium War (1839–1842).

Given that Calcutta was not anywhere near Canton and there weren't any direct routes (or were there?) from Calcutta to Canton, why was Calcutta chosen for those auctions instead of some place closer? Was it simply because it was under British control or was there any other reason?

Also, what routes did these smugglers take to smuggle opium from Calcutta to Canton?

Before railways the most efficient mode of land transportation was by river - and the Ganges River system runs nearly three quarters of the way from the opium fields (in what is modern Pakistan and Afghanistan) to Calcutta. The only comparable port facility would likely have been Bombay (modern Mumbai), but without the advantage either of large scale river transport being available in the right directions or of being on the right coast: 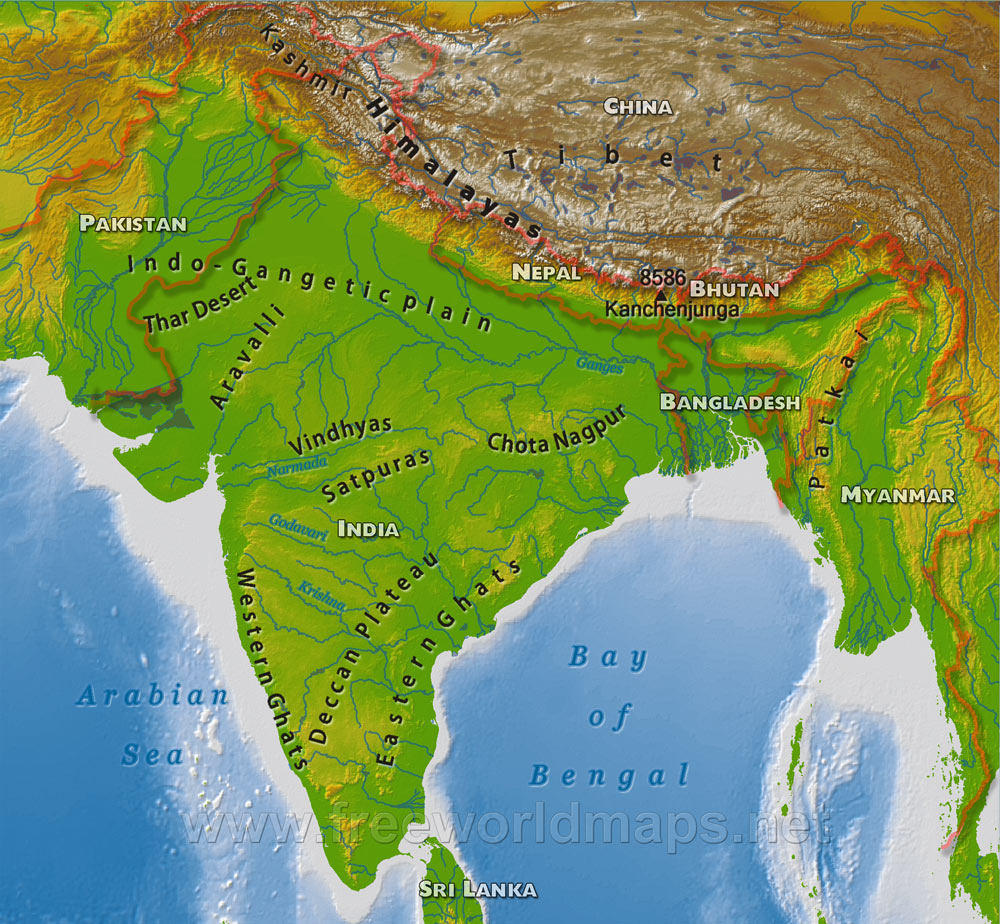 Bombay/Mumbai is located just south of the "W" of Western Gatts; Calcutta at the west end of the Ganges river delta, just west of the modern India-Bangladesh border.

Note also that the Indus River system could provide transport from the opium fields almost to Delhi (somewhat upstream from the "t" of Indo-Gangetic Plain), overland over very flat terrain between the two river systems, making the overland transport to Calcutta more than 95% by river barge/boat.

Delhi is of course historically the great cross-roads of Northern India, being both easily defended and well situated near the shortest land route between India's two great river systems; and far enough north to be somewhat cooler than more southern locales.

One, it was an assembly point for opium gathered from other parts of India because many rivers flowed in that direction from near the opium fields as Pieter mentioned.

Second, it was a port in the part of India (east) "nearest" to China and under British control. That was until Britain conquered Burma (Myanmar) after 1824, which had few good ports that also had overland connections to Opium producing areas.

Third, as of 1772, Calcutta was the headquarters of the British East India Company that ran the opium trade. It was then linked to a Bengali hinterland that produced "some" opium. The East India Company also controlled Bombay (Mumbai), but the surrounding "hinterland" was mostly Indian-controlled until about 1800.

From there it was shipped by sea and smuggled through the port of Canton (the nearest large Chinese port to India). The opium could actually have originated in any British-controlled port in the world, even London, with the smuggling occurring only upon arrival in Canton.

There wasn't a problem with shipping or "smuggling" the opium out of Calcutta or across the sea.

Opium can be grown in almost any climate and the British used the Bengal region (modern day states of West Bengal and Assam in India and Bangladesh) as they were directly controlling these regions. It would have been practically impossible to gain control over trade from Afghanistan/the Indus river region in those days as the British East India company had no control over these regions.

Calcutta port was in their control so they shipped it to China from here.

Edit: The smuggling of Opium started as early as 1780

Calcutta was very close to Ghazipur City (in present day Bihar). Ghazipur has an excellent climate for growing poppy and also had the Ganga River nearby which provided an optimum amount of water for its cultivation. The website of Ghazipur City says-

.In 1764 AD Britishers won Buxar and Ghazipur which was therafter ruled by East India Company . Company posted Mr. Richardson as a judge and Mr. Robert Warlo was made the first Collector for this district. The Britishers used this place for cultivation of indigo, opium, kewra and roses. They established Opium Factory which is of its kind.It is presently working and providing revenue to govt. of India by producing opium allkaloides. During British rule Opium manufratured in this factory was carried to China on boats through the Bay of Bengal.

So, Kolkata (modern name) was the prefered centre for trade in opium to Canton because it was the closest to the poppy fields and also had excellent water transport facilities and docks.

Let us not forget the other poppy fields. As many have said, poppy grown in Afghanistan and other areas could have been brought to Calcutta easily. But if we see a map, we can see no major rivers in the northern part of India. Thus, they had to be transported on land and around this time, these areas were lawless, with Maratha raids on Delhi and the gradual downfall of the Mughal Empire. So, it would have been nearly impossible to transport opium from there. That is why I think that Afghanistan would not have played such a big role in producing poppy for Canton and indirectly so, for Kolkata. Therefore, Ghazipur would be the reason for Kolkata being the node for opium smuggling to China.

This information comes from the 'City of Djinns' by William Dalrymple.

Not the answer you're looking for? Browse other questions tagged india china british-empire trade chartered-companies or ask your own question.

41
Why did China shut itself out of the world in the 15th century?
100
Why China was able to unify and not Europe?
20
Why was China not colonized by any country?
33
If the Ch’in dynasty was so short-lived, why was China named for it?
5
Racism, or Nationalism, represented in 19th century English Wills?
8
What percentage of the British Empire's economy was profits from the opium trade?
4
Was Kingdom of Cochin the only kingdom in South Asia to be a protectorate of (any empire of) China?
22
Had there been instances of national states banning harmful imports before the mid-19th C Opium Wars?
2
Why didn't Indonesians/Indian Ocean traders bring marsupials to Asia and placental mammals to Australia/New Guinea?