Did any Native Americans adopt a script from Europe (before being assimilated)?

As far as I know, no Native Americans developed their own written language. (Correct me if I'm wrong. There may have been some numeral systems, but that's all I'm aware of.)

So now I'm wondering if any tribe ever adopted the alphabets of English, Spanish, French, Russian, or any other European language?

I know some natives learned these languages, and presumably some of them learned to read/write in addition to speaking it. This would provide an opportunity for a tribe to adopt the alphabet if they wanted, without being totally assimilated.

P.S. I'm using the broadest definition of Native American. The native can be anywhere from Alaska, Canada, Greenland, Central America or Caribbean, and of course the mainland continents. Basically anywhere in North or South America.

First off, yes you are wrong. Some kind of long-term record-keeping seems to be a common requirement for civilized people, so both the Maya and the Inca developed something pre-contact. I personally think its likely the Mississippians did as well, but if so it hasn't survived.

The Cherokee I believe did something similar to what you are asking. Sequoya, one of their tribesmen, was a silversmith who did a good amount of trade with white settlers. So he noticed the white men reading newspapers. He did not know how to read or write English himself, but saw what they were doing and grasped the implications of it. Being a practical man (a smith) he didn't just write it off as "sorcery" as many other Cherokee did.

So he started experimenting with writing himself. He quickly dispensed with the idea of logograms because it required too many symbols (an insight that took Old-worlder's thousands of years to achieve, but they didn't know they needed newspapers either) and settled on a syllabary. That got the number of glyphs down to a manageable 80 or so. Using separate glyphs for vowels of course would have gotten it down even further, but he didn't hit on that idea. For glyphs, he adopted variants of those found in the settler's newspapers. But of course not being literate in English himself, its pretty much random what glyphs were used for what syllables. When he ran out, he had to make up some glyphs of his own. 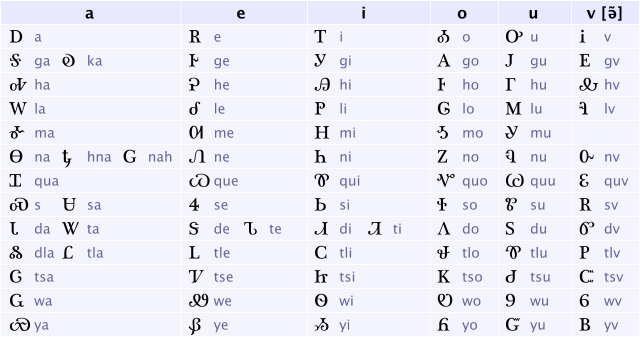 When he introduced his system to the tribe, and managed to convince them it wasn't sorcery, they took to it like ducks to water. One of the nice things about a freshly-minted syllabary is that anyone capable of memorizing the phoneme mapping is instantly literate. Soon after adoption, the tribe's literacy rate was higher than that of the nearby white settlers.

This syllabary is still in use today. The capitol of the Cheorkee tribe, Tahlequah, is a few miles from where I live. Its a city where the streets signs are bilingual in English, Cherokee, and Latin1-transliterate Cherokee. 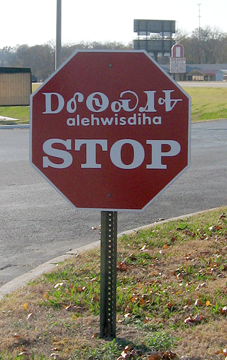 The question is a bit confusing, so I'll give two answers and hope one of them works...

Not the answer you're looking for? Browse other questions tagged language native-americans new-world script or ask your own question.