What happened to UK national debt when the NHS was created?

The National Health Service (NHS) was created after World War II, so UK national debt must have been high (?) at that point. The creation of the NHS should have caused a great increase in national debt, did it?

In fact the creation of the NHS didn't have a significant influence on the national debt. This is mostly because the NHS wasn't created from scratch (with thanks to Steve Bird). There were already existing (& publicly funded) institutions and entities (with regards to welfare,healthcare,...). These were merged and augmented to form the first NHS. Therefor the impact (budget wise) was not as great as one would expect.

In fact Graphs show a peak in national debt during 1948 - 1949 following a steep (and later on steady) decrease in debt.

During the post-war years of '48 & '49 the national debt measured a stagering 230% of GDP. This debt was mostly generated during the 2 world wars.

But 10 years later it had dropped back to around 100 - 110%. This despite the foundation of welfare-structures like the NHS. The drop continued till 1975 - 1976 when the world was faced with an economic crisis (Oil - crisis). Yet the debt continued to drop (although very slowly) till around 1990 - 1992 when debt measured less than 30% of de GDP. 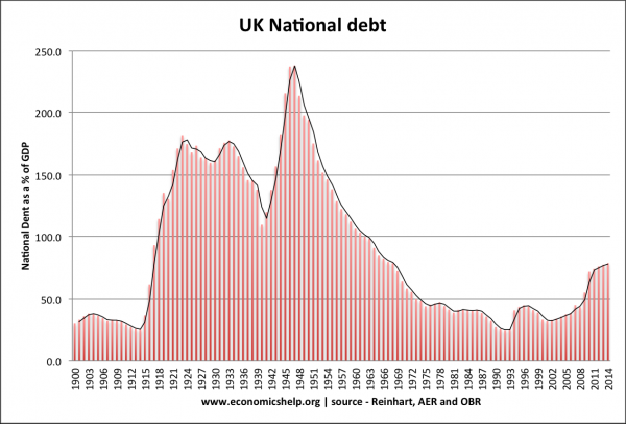 More info can be found here (including some graphs): UK national debt: the economist

If you really want to look up the UK expenditure in debt then i advise the following website: Uk public spending

Example the public spending division in 1949:

Should you wonder why the debt dropped so fast, then I would advise you to read up on the Marshall Plan Marshall Plan And other Post-War Economic initiatives.

The direct precursor to the NHS was the Emergency Hospital Service.

It is important to understand that the UK's preparations for war included requisitioning basically every piece of infrastructure and productive capability in the country. Part of this was preparing for mass civilian casualties from air raids and possible invasion; in the end this was not as bad as feared, but there were still tens of thousands of civilians requiring medical treatment as a result of enemy action. Not to mention service personnel and quasi-service personnel like the ARP and critical workers in munitions and transport.

The physical structure of the NHS's hospitals already existed, and the general practitioner system also already existed having been set up under Lloyd George. The cost of setting up the NHS was therefore about assuming the ongoing cost of staff, rather than a one-off construction cost.

The overall expenditure and tax increases in the 1939-49 period are probably quite hard to separate from the cost of the war.

Not the answer you're looking for? Browse other questions tagged world-war-two labour-history or ask your own question.

20
How was beer production affected by the war during WW2?
1
Has the accounting services industry ever been disrupted in the U.S.?
10
What Happened to Hacker Culture After 1970?
8
What were factors that led to a decline in bond yields during World War II given that the opposite should have happened?
14
Was the British Empire financially capable of maintaining India as a colony after WW2?
7
What were the advantages and disadvantages to the creation of Vichy France, from the Nazi point of view?
12
What happened to General Eugen Müller after WWII?