Does a Baal human sacrifice statue from Carthage exist?

While I was reading a Roman history book, it said that people from Carthage used to sacrifice children by placing them on the arms of Baal's statue and letting them roll to the fire.

What would be the actual shape and disposal of Baal's figure, fire and children, and is there an existing image of that statue?

Ba'al is a Northwest Semitic title applied to many gods of the region. The one I believe you are referring to is Moloch. Here is a exaggerated description of him by Gustave Flaubert, written in 1862. Although it is is not first-hand, he did visit Carthage to research and gather material for it.

Then further back, higher than the candelabrum, and much higher than the altar, rose the Moloch, all of iron, and with gaping apertures in his human breast. His outspread wings were stretched upon the wall, his tapering hands reached down to the ground; three black stones bordered by yellow circles represented three eyeballs on his brow, and his bull's head was raised with a terrible effort as if in order to bellow.

The text also states that the arms were moved with chains. However, some of these details (especially the part about the arms) is considered to be made up by Flaubert. The part about the wings is likely made up also. This account should be taken with a grain of salt. For example, according to the Republic, it was bronze. According to Jewish texts (c. 12c. AD), it was made of brass. Another Greek wrote:

...bronze image of Cronus extending its hands, palms up and sloping toward the ground

The idol was usually depicted as anthropomorphic. It was usually a bearded old man with curly horns. Here is a picture of a Carthagian Ba'al (not the version with a fire inside): 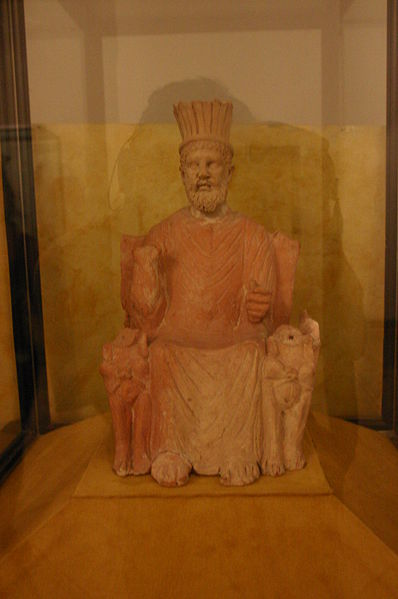 Although this statue has no openings for the rites described, it would be something similar to this statue. However, there has been little to no evidence found of this idol by archaeologists. It is hard to say what exactly it looked like as most sources only state the arms and and a fire inside. The main civilization to document first-hand these were the Greeks. As far as I can tell, there are no known existing braziers of this description. This is not to say they never existed. Carthage was razed in the Third Punic War and the idols would have gone with it. So it is rather indecisive what they looked like, but I've listed here what information has been documented.

Not the answer you're looking for? Browse other questions tagged religion carthage human-sacrifice infanticide or ask your own question.

10
What actual proof is there for Carthaginian child sacrifice?

23
What cultures did, or do, perform human sacrifice on a regular basis?
6
Where does the tradition of Christmas gifts comes from?
13
Do we consider Carthage as belonging to a different civilization from the Phoenician one?
16
Did the Minoans practise human sacrifice?
12
Did Franco consider Hitler a "son of the Catholic Church" who "died while defending Christianity"?
18
Did the Vikings practice voluntary human sacrifice?
21
Did horse sacrifice persist in Christian Europe?
5
When did worship of Baal cease to exist?
6
What was the difference in the minds of the Romans between human sacrifice and gladiator games?