How were Aksumite ships constructed?

The Kingdom of Aksum is known for its trading prowess, with trade partners as far away as India. Do we know what kinds of ships they built and used? Ethiopian freshwater tankwas are made of papyrus, but this sounds too flimsy for the open ocean, and I've never seen one big enough to use as a cargo vessel.

Edit: I removed "open" and added a note about size, as I was really trying to compare tankwa use today, on Lake Tana, to the size and stability of a ship that could travel from Adulis to India.

Personally, I'd prefer if they used technology similar to the a baghlah dhow, but can't tell if they (or a sufficiently large precursor ship) were available that far back. Copying Roman designs would fit the classic Eurocentric model of history, and I kind of hope it isn't true. I'm also uncertain whether Aksum would have had access to enough trees near the coast to support any substantial number of wooden vessels.

Edit 2: This discussion is bringing up a lot of useful ideas for me, and I'd like to upvote comments (especially the note about lateen sails), but apparently I still lack the reputation to make it happen.

Presumably the ships of Axum were similar to the earlier ships of Egypt on the Red Sea. The ships were made of wood, and the ropes woven of papyrus.

You can find more here; the ships were dismantled and stored in the caves. These ships were constructed of red cedar which had been imported from Lebanon.

It is possible to use papyrus boats at sea: Thor Heyerdal managed to do this on his second try, keeping a papyrus raft at sea for two months.

The Afropedia site on Axum ends with some comments on their shipping:

Aksum had a fleet of ships that guarded the Red Sea ports. Aksumite ships were put together by rope fibers. It did not use iron nails to bind wood. Ships sailed as far away as India and possibly China. 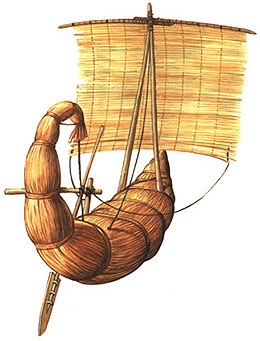 The Kingdom of Aksum is dated from 100–940 CE. The sailing technology of this time frame is way beyond Egyptian papyrus rafts. This begins almost 200 years after the battle of Actium ,one of the great naval battles of the time, and in fact one of the trade partners mentioned is the Roman, and later Byzantine empire. 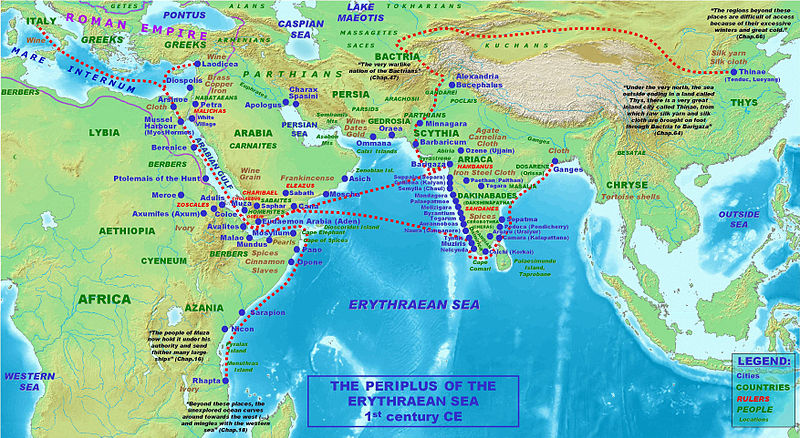 In the book 'Foundations of an African Civilisation: Aksum and the Northern Horn, 1000 BC ... By David W. Phillipson, on page 200 he discusses that many have assumed the ships were of Roman, or later Byzantine origin. You are looking at a very large time span, after all.

One of the most common Roman merchant ships was the Corbita. These could carry 70-350 tons of cargo! (I cant find a good public domain image, sorry). The ships probably varied along this trade route however, with different type ships operating in the gulf than in the open ocean.

"all the boats which are found in India and on this sea (the Red Sea) are not made in the same manner as are other ships. For neither are they smeared with pitch, nor with any other substance, nor indeed are the planks fastened together by iron nails going through and through, but they are bound together by a kind of cording. The reason is not as most persons suppose, that there are certain rocks there which draw the iron to themselves (for witness the fact that when the Roman vessels sail from Aelas into this sea, although they are fitted with much iron, no such thing has ever happened to them), but rather because the Indians and the Aethiopians possess neither iron nor any other thing suitable for such purposes. Furthermore they are not even able to buy any of these things from the Romans since this is explicitly forbidden to all by law" (Procopius, ed. Dewing 1914: 183-4).

This technique of boat construction is called 'sewn boats', and indicates the Aksumites were using boats of Indian design or style for their own vessels.

The best known boats built with sewn construction are the various forms of Dhow native to the Red Sea, Persian Gulf, and Indian Ocean for over two thousand years.

So, look into Dhow, and Mtepe for ships of the 'sewn' type.

Not the answer you're looking for? Browse other questions tagged ancient-history naval ethiopia or ask your own question.

9
Were sailing ships of the line understaffed with gunnery crews so that there were not enough for 2 broadsides?
6
How were Warrant Officers appointed to Royal Navy ships during the Age of Sail?
6
Can anyone identify these ships? And what year?
24
How did ships acquire targets beyond the horizon in WWI?
51
How did they cook on ancient ships?
34
Why were British ships not of the same quality as French and Spanish ships until the latter part of the 18th century?
60
Were ancient ships named?
44
How did passengers keep warm on sail ships?
35
How were horses disembarked from sail ships?
4
Why were Japanese escort ships not numerous at the battle of Bismarck Sea?