What happened to rural gas stations in the US?

When driving on the rural byways of the rural Midwest one will find gas stations scarce. But if you look closely enough, in every town, down to the tiniest of unincorporated ones, you will find a place where a gas station once was. Sometimes the building is still there either being used for another propose or simply derelict. Sometimes the lot is empty and the only remaining trace is a small, oval-shaped concrete divider which obviously supported a gas pump at one time.

If anything our consumption of petroleum has increased by many times. When did these stations begin disappearing? What happened in the oil industry or American culture that made these businesses no longer viable?

Why have rural gas stations vanished? Because business conditions have changed: my grandfather built a small gas station in 1921 at Six Mile and Livernois, near Detroit, on a corner of his father's farm. 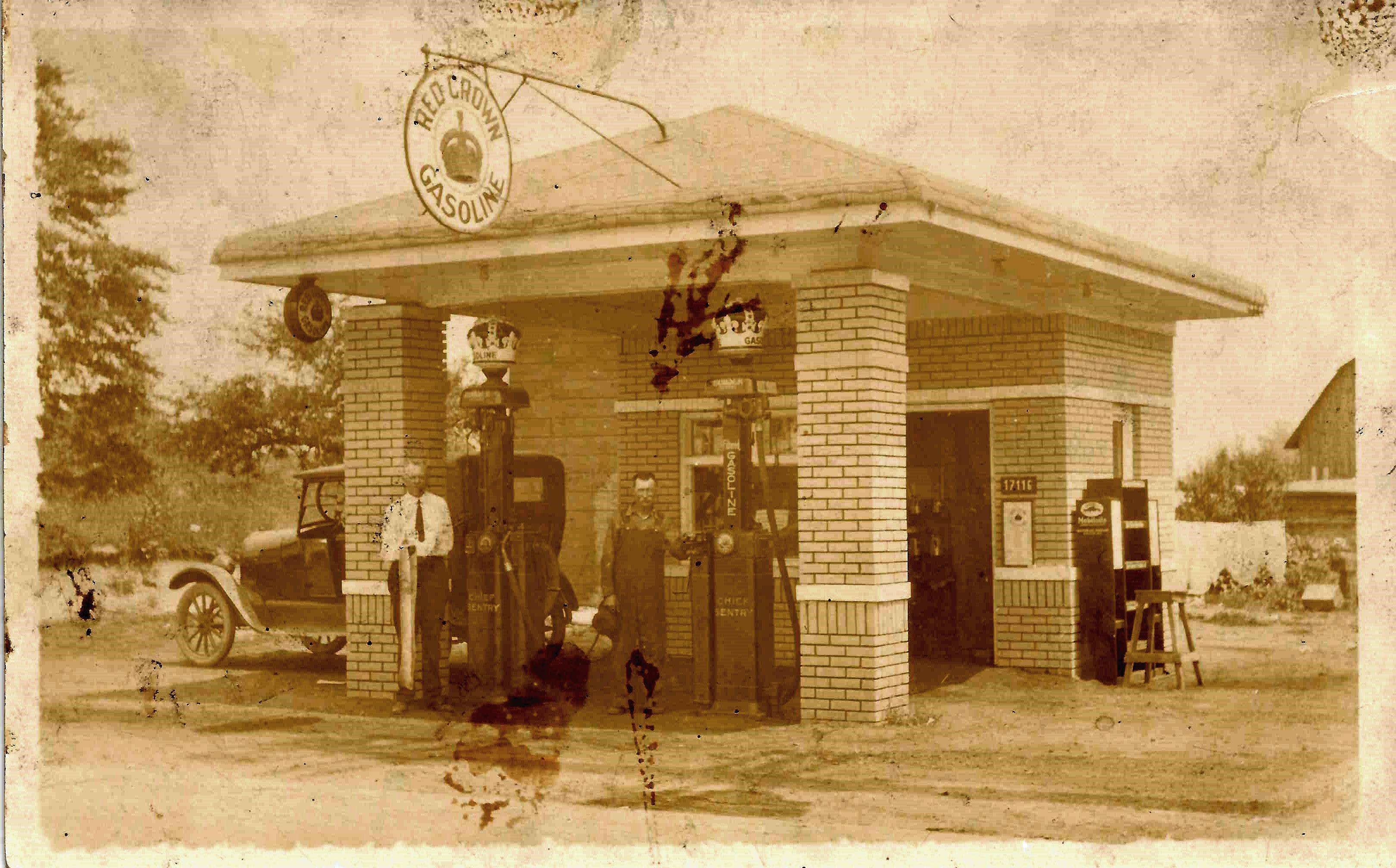 In those days tires needed to be patched or replaced every thousand miles or so, and there were many other small services that had to be performed on every vehicle. My grandfather had been trained as a mechanic, courtesy of the US Army, with years of service between 1914 and 1920. In those days every gas station also had a mechanic, and it was typically owned and operated by the same person.

This business model changed in the 1950/1960 time period, with the rise of large-volume, corporate-owned service stations. This was partially due to the rise of the Interstate highway system, but also by the improved reliability of the automobiles driven by the public.

Today it is uncommon to find a service station with a garage and a mechanic, and for most of us we seldom have to change a tire - the tread is good for 40,000 or more miles. Up until 1960 3,000 miles was a good tire, then it went flat, you took it off, patched the inner tube, pumped it up, put it back on, and off you went. But I haven't had to replace a tire while driving ... for a very long time, probably since 1975.

In addition, many operations became nonviable during WW II due to the fuel and tire shortages, which lead to their closures.

Chain stores (franchises or otherwise aligned with chains) do deals with the oil companies and the owner operator is offered worst deals. The chain stores have advantages in gas price (which could be sold at a loss and the other stuff marked up ) which eventually drives the gas only and/or independent owner operated businesses out of businesses.

One other reason for the disappearing gas station is - vehicles have become far more reliable, and far less demanding of routine maintenance. Most of those mom and pop stations made their real money on maintenance and repair. Which is why they've been replaced by mini-markets.

Even into the early 70's, tires would last maybe 20k miles, and were far more prone to punctures. The onset of radial tires plus increased content of carbon black in tires now gives them upwards of 80k mile life, and it's extremely rare to get a flat any more, so much so that the full size spare tire in a car is now quite rare.

Same with brakes... 20k-30k miles used to mean a complete brake overhaul. Today... 100k on the original brakes is not uncommon.

For that matter, cars themselves tend to last longer. A pre-1970 car, at 100k miles, was expected to be in need of an engine overhaul. The interval was shorter for air cooled engines like the VW Beetle. Today, the better cars can go over 200k miles with no major engine work.

The one maintenance issue that's still regular is oil changes, which is why we see instant oil change outlets everywhere.

Not the answer you're looking for? Browse other questions tagged business-history industry or ask your own question.

11
Who started/popularized the department store perfume gauntlet?
2
What are some early examples of local businesses advertising?
5
What major company bought all the paint of another company in the 20th century?
2
Circa 1940, what was the oil production of each nation?
13
How did the email client industry develop?
4
What is the history of "industrial date coding" (year followed by week number)?
11
What exactly were the dealings of Ea-Nasir ("The Worst Businessman Of The 18th Century BC")?
2
Did the Soviets lack ball bearings in WWII?