Are there primary sources that record the pre-conquest decoration/mosaic of the Hagia Sophia?

Are there primary sources that record what the mosaics looked like in the Hagia Sophia before the Turkish conquest in 1453?

Procopius, De Aedificiis, published in 561 AD, provides a contemporary description. The extant material was published in the Loeb Classical Library.

Many of the mosaics were plastered over when Constantinople fell to the Ottoman's in 1453; it is only recently that restoration has begun; for details see Mosaics of Hagia Sophia, Istanbul:

They remained hidden for 400 years, until the architects Gaspare and Giuseppe Fossati temporarily uncovered them in 1848 and 1849. In 1931 Hagia Sophia was deconsecrated as a mosque and opened as a museum with the permission of the president of the Republic of Turkey, Kemal Atatürk. Between 1931 and 1949, the mosaics were uncovered and cleaned by the staff of the Byzantine Institute.

Heilbrunn Timeline of Art History notes that new mosaics were added after the Iconoclastic period.

The interior of Hagia Sophia was paneled with costly colored marbles and ornamental stone inlays. Decorative marble columns were taken from ancient buildings and reused to support the interior arcades. Initially, the upper part of the building was minimally decorated in gold with a huge cross in a medallion at the summit of the dome. After the period of Iconoclasm (726–843), new figural mosaics were added, some of which have survived to the present day. 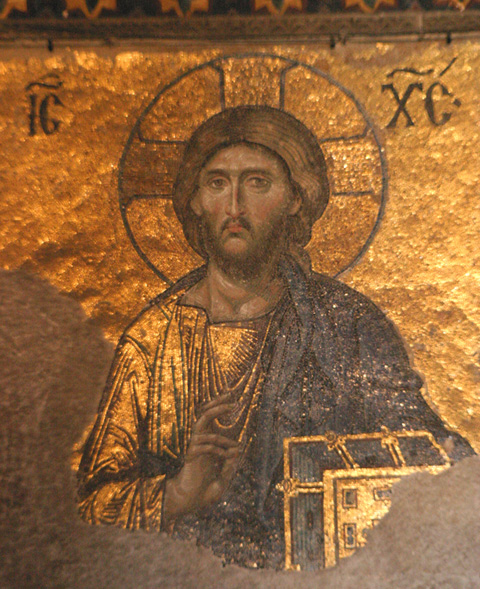 Not the answer you're looking for? Browse other questions tagged byzantine-empire or ask your own question.

12
Does Little Hagia sophia still contain Greek mosaics under the plaster?
7
Primary sources from Umayyad times
24
How significant was the Fall of Constantinople as an event leading to the Age of Exploration?
11
When did Abu Bakr agree to lower taxes for the Arabs living under the rule of Byzantine and Sassanid Empire?
14
Was the interior of Hagia Sophia in Constantinople ever covered with mosaic icons?
12
Was the ancient Pontic city of Athenai (Ἀθῆναι) related to Athens?
6
What is the earliest historical record of Hungarian words?
9
What happened to the cross on the dome of Hagia Sophia?