Is the "Katyusha" scene from Deer Hunter historically accurate?

In the movie Deer Hunter we can see Russian-Americans sing the song "Katyusha" during a wedding. One can clearly see that this song fits well into the movie's themes (the groom on this wedding is about to go to Vietnam), but is this scene historically accurate?

As far as I know, "Katyusha" is a Soviet song (composed in 1938). The Russian emigrants are likely Whites (that is, opposed to communist Reds). Is it possible that the Russian-American community portrayed in this movie came to America later, after creation of "Katyusha"? Or was this song so popular that it was accepted by Russians who rejected soviet rule (after all, there is nothing about communism in it). Could somebody shed some light on this case?

Let's split this into two questions. First, is it plausible that a population of Russian emigrants from the White émigré population would sing this Soviet song. And second, was it the intention of the film makers to portray the Russian emigrants as influenced by Soviet culture.

According to Wikipedia, Russian Americans came to America in four waves: the "First Wave" in mid- to late-19th century, "Second Wave" in 1917-1922 comprising the White emigres, "Soviet era", and "Post-Soviet era" starting in 1991. The movie is set during the Vietnam War, ruling out the fourth period. Very few emigrants were permitted during the Soviet era, and certainly not entire families. Thus it is most likely the film community is a first or second wave (pre-Soviet) Russian emigrant community.

Of the First Wave, a few groups, such as the Old Believers in Erie, Pennsylvania (same state as the Deer Hunter Russian community but a few counties away), or various Jewish-Russian Immigrants, came to America seeking freedom to practice their religion undisturbed. Other peasant groups came for economic reasons and integrated to American society to various degrees, retaining cultural and/or religious elements important to them, and settling in New York, Philadelphia, Boston, Chicago, Cleveland, Pittsburgh, and the coal-mining towns of eastern Pennsylvania.

The Second Wave (also called the White émigrés) migrated throughout Europe, East Asia, and the Americas. Many intellectuals, aristocrats, army officers, and clerks left Russia as part of this group between 1920 and 1922 and the 1930s and settled in cities such as New York City, Philadelphia, and Chicago. Most were strongly anti-communist and sought to preserve pre-revolutionary Russian culture while living abroad. Many remained involved either actively or morally in the struggle against the Soviet Union.

The song Katyusha was composed in 1938 by Matvei Blanter who was actively writing Soviet propaganda songs during this period, with lyrics by Mikhail Isakovsky a respected Soviet poet. But the song itself was not heavy in Soviet or Communist imagery and was taken by many as a general song about defending one's motherland. It became popular throughout Western Europe with variants in Italian, French, and Greek.

From the above, I think it is more likely that the Russian settlement shown in Deer Hunter was of the old First Wave group. The filming of the wedding took place in the St. Theodosius Orthodox Cathedral in Cleveland, Ohio; as it was founded in the 1890s, it can be assumed a community worshipping there would be from the original First Wave Russians. Further, the Second Wave would have disliked anything reminiscent of Soviets, and while they may have been proud of the Red Army's defense of their homeland, I imagine Soviet music at a wedding would be dimly regarded; further the White émigré's tended to be higher class and more urban, compared to the more blue collar community shown in the film. 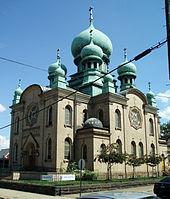 It would seem unlikely but not necessarily historically inaccurate for a First Wave Russian settlement in Pennsylvania to sing this song at a wedding; it was a popular song worldwide, and its Soviet connotations might have been overlooked. However, it wouldn't have been "brought over" with them as they emigrated over half a century before the song was written, so they would have had to pick it up via American popular culture. So while plausible, it seems rather round about and hardly likely.

Now to the second question, was it the film maker's intention to show this community as influenced by Soviet culture? I've found nothing definitive one way or the other, yet a number of fundamental inaccuracies has been found in the movie; for instance Russian Roulette (a key plot element) was not played in Vietnam; one of the songs they sang early in the film, "Drop Kick Me Jesus", was not released until 1976, long after the war. Thus, it seems most likely that the song was selected because it sounded Russian folky yet still was a catchy enough tune that American audiences would enjoy it. And as said in the OP, it nicely fits the narrative theme of young men going off as soldiers to fight for their country.

This is not political, this is nostalgic.

I am an immigrant from Russia, and I've seen many, many times older immigrants singing or playing Soviet era songs, including Katyusha. One can hate the regime one and still love the country. Many songs, especially with mild or none political content, are being loved for the music and the music of the language many immigrants miss. One can reject the politics of the country one left behind, but still have a piece in one's hard for the culture of that country.

In fact, I occasionally saw Russian immigrants with very strong anti-communist opinion listening, with a nostalgic air, to far more pro-communist songs than Katyusha. This was about remembering their youth, recalling the music of the native language. There is nothing political in that.

Not the answer you're looking for? Browse other questions tagged russia movies music emigration or ask your own question.

11
Is the position of women as portrayed in the Mad Men series historically accurate?

32
Where does the name of the country "Belarus" come from?
11
How historically accurate is "Life is Beautiful" when it comes to Jewish extermination?
10
How historically accurate is Les Miserables?
7
How accurate is Nietzsche's account of the birth of tragedy?
5
Do we have any authentic Native American flute music from the 18th century or earlier?
4
Are these outfits of children of Nazis historically accurate, and if so, what is their meaning?
21
Why did the film "The Longest Day" have the "cricket" training scene if the Allies received no intelligence about the hedgerows in Normandy?
3
What was the route for ships from England to South Africa in 1840?
3
How would emigrants travel the railway lines going from Grajewo to Bremerhaven in 1911 and from Grajewo to Rotterdam in 1917?