How did the United States treat POWs in Vietnam?

Did the USA take prisoners of war in Vietnam? Did they administrate POW camps? Or were the South Vietnamese in charge. I know there is a famous photo of a South Vietnamese police officer summarily executing a prisoner.

Focusing just on the Viet Cong, the American's usually transferred them to the custody of the government of South Viet Nam. This legal analysis identifies some of the flaws in the Geneva Conventions: Law at War: Viet Nam 1964-1973:

As combat units of the United States became heavily engaged in the war in 1965, the question arose as to the proper disposition for battlefield captives and others detained by U.S. units during military operations. In 1965 the United States determined to win over to the Vietnamese armed forces all individuals captured by U.S. forces. Such an arrangement is permissible under the Geneva Prisoner of War Conventions, which provide for the capturing power to release prisoners to a detaining power as long as both the capturing and the detaining powers fulfill certain obligations concerning the welfare of the prisoners.

While the legal basis for a transfer of prisoners was sound, carrying out the transfer was beset by serious legal and practical difficulties. The Republic of Vietnam regarded the Viet Cong as criminals who violated the security laws of South Vietnam and who consequently were subject to trial for their crimes. As indigenous offenders, the Viet Cong did not technically merit prisoner of war status, although they were entitled to humane treatment under Article 3, Geneva Prisoner of War Conventions. Under Article 12, the United States retained responsibility for treatment of its captives in accordance with the Geneva Conventions even after transfer of the captives to the South Vietnamese. At the same time, the United States was concerned that Americans held captive in North and South Vietnam receive humane treatment and be accorded the full benefits and protection of prisoners of war. In the south, where the government of South Vietnam had tried and publicly executed some Viet Cong agents, there had been retributory executions of Americans by the Viet Cong. In the north, the Hanoi government stated that it would treat captured American flyers humanely, but it would not accord them prisoner of war status as they were "pirates" engaged in unprovoked attacks on North Vietnam. Hanoi repeatedly threatened to try United States pilots in accordance with Vietnamese laws, but never carried out this threat. U.S. policy was for the United States to do all in its power to alleviate the plight of American prisoners. It was expected that efforts by the United States to ensure humane treatment for Viet Cong and North Vietnamese Army captives would bring reciprocal benefits for American captives.

Early in the war there had been some question in the United States command as to whether the struggle against the Viet Cong constituted an armed international conflict as contemplated in Article 2, Geneva Prisoner of War Conventions, or a conflict not of international nature, to which Article 3 would be applicable. With the infusion of large numbers of United States and North Vietnamese combat units and the coming of the Korean, Australian, Thai, and New Zealand contingents of the Free World Military Assistance Forces, any practical doubts as to the international nature of the conflict were resolved. Although North Vietnam made a strong argument that the conflict in Vietnam was essentially an internal domestic struggle, the official position of the United States, stated as early as 1965, and repeated consistently thereafter, was that the hostilities constituted an armed international conflict, that North Vietnam was a belligerent, that the Viet Cong were agents of the government of North Vietnam, and that the Geneva Conventions applied in full. This view was urged upon the government of South Vietnam, which acceded reluctantly, but subsequently came out in full support of the conventions. 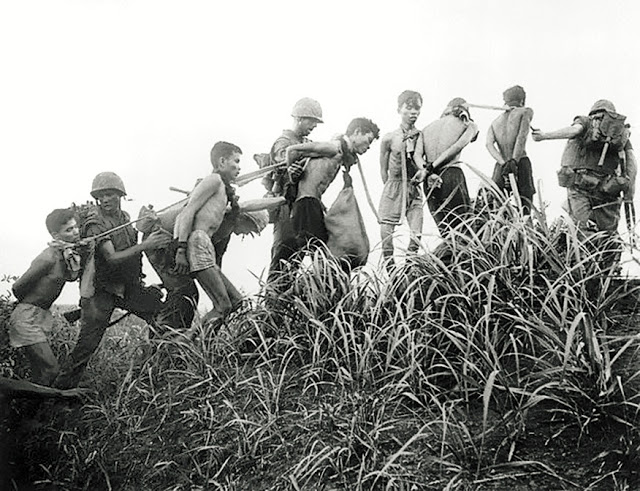 I was assigned to the 50th Medical Co.(Clr) in Long Binh 1965 - 66. This unit was a second tier medical facility treating VietCong prisoners until they would be well enough to be sent to an RVN POW camp. The unit also handled U.S. Army prisoners awaiting transfer to CONUS after being convicted of a crime and awaiting transfer prison. The facility was enclosed with fencing and barbed wire and had (for the VietCong) three wards. It was guarded by MP's. The doctors and medics caring for them treated them just like any other patient. Jokes were made about the "slopes", etc. but since they didn't speak English I think they were not likely too offended. They got the same food as the troops caring for them, except they got rice with every meal as I remember. There was never any abuse, torture, etc. Some became friends with various medics. They all hated to be released from this facility and be sent to the RVN POW Camps and often re-injured themselves to prevent that.

I was the Sgt in charge of the POW camp in Quinon Valley in 1968. No prisoner was abused. Their medical needs were attended and they were fed and sheltered. We had no problems with them. I closed the compound down and all 150 were turned over to Arvn police.

12
Did the USA win the counter insurgency war in the Vietnam war?
31
Why didn't China assist in the Vietnam War like they did in Korea?
2
Who were those Vietnamese translators?
12
What was the Catholic Church's opinion of Diệm's South Vietnam?
30
Was Nixon's Vietnam claim right before the 1968 election true?
6
Were Communists drafted for the Vietnam war?
40
Why did the United States not resort to nuclear weapons in Vietnam?
1
How did the the Soviet-China near-war in 1969 affect the supply of arms to North Vietnam?
7
Why did the US use so much ordnance during the Vietnam War?