How to make a proper chiton and himation?

I have been searching for instructions on how to make a proper chiton and himation, but can't find anything with a good level of detail and historical accuracy. Could someone point me to such a source, or else provide such directions?

It looks like very few pieces of clothing survived from that time. Without final proof we might resort to reconstruct these pieces of clothing from sculpture, paintings, mosaics and writings. Most sites online discuss the chiton in the context of female clothing. Just because the Greek males did wear that piece as well before but later preferred wearing just the himation without the chiton underneath. In general. As this is about fashion, we have to expect a huge array of styles, variations, and exceptions from any rules we may come up with.

The Greek himation was apparently used as a cloak and as such similar in function and style to the Roman pallium. The material being the usual of "what's available": wool, linen, …(silk etc in Roman times). The construction overly simple, the wearing and drapery then overly complicated (but still simple in comparison to the variety of codes you could read into draping a toga).

Basic patterns are really basic, like the himation being just "A rectangular cloak wrapped around the body and thrown over the left shoulder":

Pallium A Roman cloak, corresponding to the Greek himation, of a rectangular length of material; fabrics used were wool, linen and silk. Pallia could be variously coloured (white, diverse shades of red, yellowish, black) with gold brocade or purple stripes. They are known from the 3rd cent. BC and were initially worn only by friends of Greek culture, e.g. philosophers (Liv. 29,10); but they quite soon enjoyed the greatest popularity because they were comfortable and simple to wear (cf. Suet. Aug. 40) and were used as everyday dress on the street together with the equally comfortable crepidae (Liv. 29,19,12; Suet. Tib. 13; Shoes). A pallium was worn over the tunica , draped from the left shoulder across the back and on to the right shoulder, or it was placed over the left shoulder from behind, across the back, under the right arm and finally over the left arm or the left shoulder. The women's counterpart was the palla (cf. Apul. met. 11,3), but pallia are also documented by literary sources as cloaks for women (e.g. Varro Ling. 8,28; 9,48), and for goddesses (e.g. Venus), mythical queens and heroines. Pallia continued in use until the 7th cent.

Further readings to find in The Chiton, Peplos, and Himation in Modern Dress, giving some examples from archaeology.

To judge the accuracy desired, a general look into Mary Harlow and Marie-Louise Nosch (Eds): "Greek and Roman Textiles and Dress. An Interdisciplinary Anthology", Ancient Textiles Series Vol. 19, Oxbow Books: Oxford, Philadelphia, 2014 seems advised. In there we find Mary Harlow and Marie-Louise Nosch: "Weaving the Threads: methodologies in textile and dress research for the Greek and Roman world – the state of the art and the case for cross-disciplinarity", p1–34. And to employ that style correctly we might turn to looking at the surrounding culture:

The tremendous variety in the arrangement of the man’s himation suggests that it required a great deal of attention on the part of the wearer to man- age the garment properly. Several ancient authors comment on the proper arrangement of the himation. In Aristophanes’ Birds, Poseidon chastises the Triballian god: “What do you think you’re doing, draping your himation like that, from right to left? Please reverse it, this way, from left to right. Oh, you sorry bungler!” (1567–1569). Plato’s Socrates distinguishes between “the man who has truly been brought up in freedom and leisure, whom you call a philosopher” and a slave who “does not know how to wear his cloak as a freeman should, properly draped” (Theaetetus, 175e). Other sources mention the wrong way to wear the himation. Aristotle notes that after the death of Pericles, Cleon “addressed the Ekklesia with his garments tucked up when it was customary to speak properly dressed” (Constitution of Athens, 28.3). One of Theophrastus’ Characters, Boorishness, “sits down with his himation hitched up above his knee, thereby revealing his nakedness” (4.7). And Demosthenes ridicules Aeschines “the clerk” by stating that “he walks through the Agora with his himation down to his ankles” (19.314). It is clear that the proper arrangement of the himation was learned via means of proper socialization.The range of potential messages, intentional or not, that could be communicated by the garment were likely discernible only to a select group. An important ethnographic parallel is the traditional Ethiopian shamma, which communicates social status, role, context, even mood, depending on its arrangement.

That shows that except for traditional roles like acting as priests etc the Greeks that did wear a chiton, for example as part of armour, the garment became ever shorter in length, eventually resembling a bit the mini skirts of the 1960s: 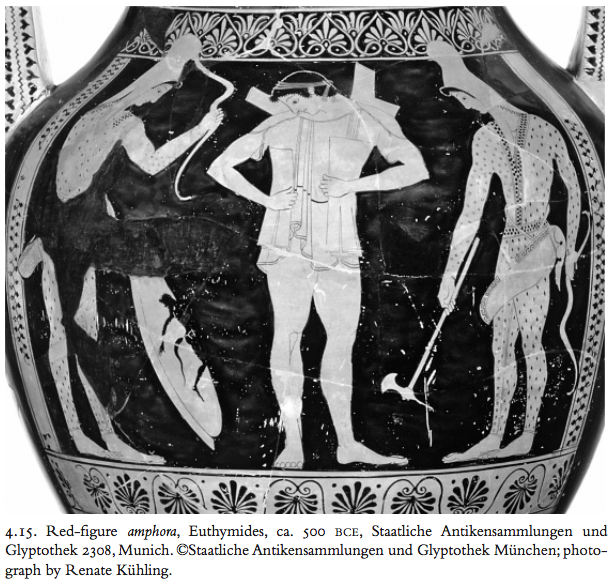 Although some have suggested that men wore the chitoniskos as everyday garb underneath the himation, the visual evidence is lacking. (Lee, p 111.)

Not the answer you're looking for? Browse other questions tagged ancient-history ancient-greece clothing or ask your own question.

12
Was Theodoric the Great killed by Justinian?
21
Why didn't the Persians make and use ballistas and other kinds of artillery?
13
Roman era clothing (Egypt + Carthage)
4
Is there any historical basis for the red/white color scheme of the Assassins?
9
How accurate is Stone's "The Trial of Socrates"?
17
Are there non-Biblical references to collecting foreskins?
7
What sort of maps did the ancient Greeks make and distribute?