Before his arrival at St Helena, was Napoleon legally a prisoner of war?

I would like to know whether in law Napoleon was a prisoner of war when he surrendered himself to the British after the Battle of Waterloo, did he retain that status up to the point when he was landed at St Helena and did his legal status change at St Helena because it belonged to the East India Company rather than the British government?

Napoleon surrendered himself to the HMS Bellerophon on 15 July 1815. He was transported to the southern coast of England and eventually set sail for his imprisonment at St Helena on HMS Northumberland on 7 August. He reached St Helena on 1 October.

I think two treaties are relevant. First, the Convention of St Cloud was signed on 7 July 1815. This signified the end of hostilities and allowed the British and Prussian troops to freely enter Paris. Napoleon surrendered himself after this date.

More importantly (I think), the Treaty of Paris was signed by Britain and France on 20 November 1815. Article 10 of this stated: “All Prisoners taken during the hostilities, as well as all hostages which may have been carried off or given, shall be restored in the shortest time possible.”

A search of news stories in the London Times suggests in practice the British government did not start releasing French prisoners until late December 1815: “Government gave directions in the course of last week, of the agents of the prison depots at Forton and Dartmoor (Captains MOTTLEY and SHORTLAND) to provide vessels and send home all the French prisoners that are under their charge. Yesterday those in confinement at Forton commenced being shipped, either for Havre or Cherburgh". (The Times, 26 December 1815, p 3).

The relevance of all this is that Napoleon arrived at St Helena on 1 October, BEFORE the Treaty of Paris was signed. Since St Helena belonged to the East India Company, I suspect the island lay outside the jurisdiction of British courts AFTER the Treaty was signed (regarding the EIC's independent powers of legislation, especially pages 19 and 20). In other words, once he had been taken there, the British authorities were no longer obliged to release him according to the terms of the Treaty of Paris. It may be that that this was an important motive for sending Napoleon to St Helena, not just because it happened to be very isolated.

In the book Napoleon After Waterloo: England and the St. Helena Decision By Michael John Thornton the status of Napoleon is discussed in great detail, including questions of law.

There are several considerations: 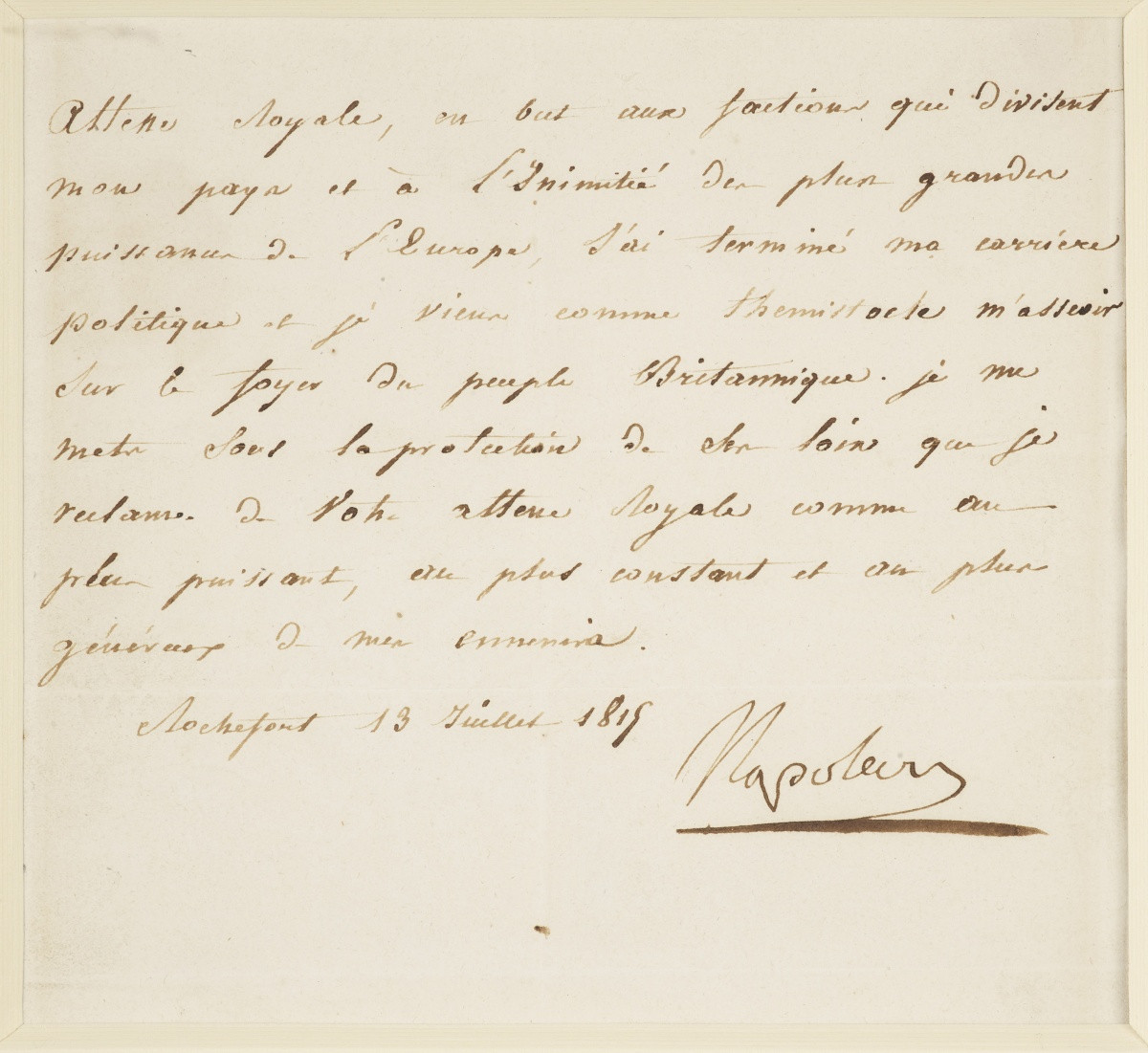 The Prince Regent declined to offer hospitality in Britain, so he was summarily transported to St. Helena, a distant and isolated island in the south Atlantic, to stay for the remainder of his days.

Note added thanks to the research of @user8654. A few months later an act was passed "for the more effectually detaining in custody Napoleon Buonaparte", an ex-post facto law intended to regularize Napoleon's indefinite detention at the pleasure of the British government. In this act it states that he is to be treated as a prisoner of war, this despite the fact that all prisoners captured during the wars have already been released.

Prisoners and Detainees in War discusses the evolution of the legal theory of prisoners taken during war; it has evolved considerably since the days of the French Revolution and the Napoleonic wars; one should not expect that the legal status of "Prisoner of War" could even be determined for a ruler who had abdicated

Certainly no. The laws cannot be applied back in time. There was no legal notion of prisoner of war at the time of Napoleon. The corresponding international legislation was not introduced until the end of 19th century.

And even by this legislation he would not quality. Much later (in the middle of 20th century) a "war criminal" was defined. Perhaps he would qualify for "planning and performing a war of aggression". But this was more than a century after Napoleon's times.

Not the answer you're looking for? Browse other questions tagged war france napoleon prisoners-of-war law or ask your own question.

31
Which war games did Napoleon practice with his generals?
8
Was either side legally in the right in the Hundred Years War?
6
How did Napoleon I succeed in France despite his shortcomings in French?
10
Were Napoleon's chances of being caught after Waterloo high or low?
19
What were the “passports” that diplomats requested when declaring war?
1
How was Napoleon able to take power from the Republic
5
Why didn't the English overrun France when the king was their captive?
2
What prevented the Indian Army to wrest Kashmir from Pakistan despite the UN Security Council's resolutions of 1948-49?
16
Why did the negotiations between Henry V of England and France fail?