When and why did the Democrats become the more liberal of the two main parties in the USA? [closed]

Until the 1960s, the Republican party was the centrist, "Establishment" party, and the Democrats were an unlikely mixture of right and left, including George Wallace and George McGovern. This was because after the Civil War, the Democratic party housed almost everyone who was not a Republican, including northern laborers, the rural poor and Southern landed gentry.

The decisive event that formed the modern parties was probably the Civil Rights Act of 1964 passed under Democratic auspices. On one hand, that pushed newly-enfranchised African-Americans (formerly sympathetic to the "party of Lincoln") into the Democratic party in droves. On the other hand, it pushed conservative whites, particularly Southerners out of the Democratic party and into the Republican. Finally, it made the Democratic party the party of choice for liberal (mostly white) former Republicans.

The Democrats were "branded" the more liberal party in 1968, when Nixon could run as the "law and order" candidate against a party that lost control over its own nominating convention in Chicago, and again in 1972, when delegates that where notably younger and proportionately more female than most groups, nominated ultra liberal George McGovern for President.

Due to the way party alignment works, neither party was uniformly left or right leaning until about 40 years ago.

Under the USA 2-party system, what would be parties elsewhere become "wings" in the existing two parties. What wings identify and support which of the two parties is called "alignment". Under the previous alignment (the "New Deal" alignment of the 1930's to 1970's), both of the USA's two major parties had liberal and conservative wings. They often go by a multitude of names, but for convenience here we can refer to the old Conservative Democratic wing as the "Dixiecrats" and the Liberal Republican wing as the "Rockefeller Republicans".

Not only were the Rockefeller Republicans liberal on social issues like the repeal of Jim Crow, but also on many of what we would today call "fiscal" issues, including being supportive of the New Deal. They actually went by many different names, but at the end this wing was referred to as Rockefeller Republicans after their sole remaining prominent member, Nelson Rockefeller.

The more conservative wing of the party, led by Barry Goldwater and his protégée Ronald Regan actively attacked this wing. Regan in particular did everything he could to make "Liberal" synonymous with "not Republican". Richard Nixon helped the process along greatly, nurturing the growing political realignment and welcoming the dissatisfied racist conservative Dixiecrat wing of the Democratic party that had voted solid for Goldwater into the Republican Party. This gave the Republicans enough electoral muscle that they didn't need the Liberals among them anymore. They essentially withered away, and their voters by-and-large either died off (time sucks), or became Democrats.

The Dixiecrats were a group of very socially-conservative voters, primarily drawn together by their support of the white supremacist social order, particularly in the South. The Democratic party itself wavered between lukewarm and active support of the Civil Rights movement during the mid-20th Century, which was a state of affairs the Dixicrats found intolerable. They started out trying to form their own party in the late 1940's and 1950's. After years of active courting of this vote from Goldwater, Nixon, and Regan, they eventually moved over to the Republican party.

The only book I'm aware of that goes into this realignment is Nixonland. But its pretty obvious if you take a look at the election maps from 1948 and 1964 that Jim Crow voters were looking for an alternative to the Democratic Party. 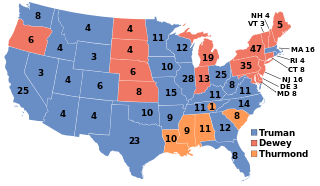 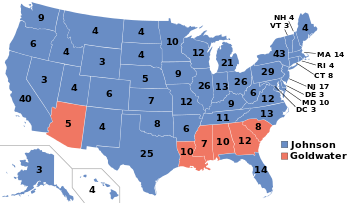 There's no exact date, but the late 1970's is pretty much when the end happened for the Rockefeller Republicans. Nelson Rockefeller died in 1977, and Regan's win in 1980 pretty much iced them as a political force. A few hung on until the early 2000's in states where conservatism was not a viable election strategy, but I believe Maine Senator Susan Collins is the only prominent one left.

Not the answer you're looking for? Browse other questions tagged united-states political-party or ask your own question.

49
Why didn't the USA move to the left after WWII?

19
Why did baseball become more popular than cricket in the USA?
49
When and how did the USA and the UK become allies?
13
Why didn't Ronald Reagan become Republican candidate for the President of the USA in 1976?
16
When and why did smiling at strangers and in photos become customary in the United States?
10
When did “whites only” signs (racial segregation) become illegal in the USA?
12
How did the South USA become more overtly Christian than the North?
4
Why does the USA only have two political parties?