Normandy: Why did the landing craft open on the front?

I assume this beach scenario was typical on D-Day. (Graphic violence)

It shows a landing craft reaching the shore, where it lowers a hatch on the front of the craft, exposing the invading soldiers to a hail of bullets. It's like shooting fish in a barrel. The ones who survive seem to do so by hopping over the side of the boat into the water.

So why on Earth did the boats open at the front?

They still do it that way: 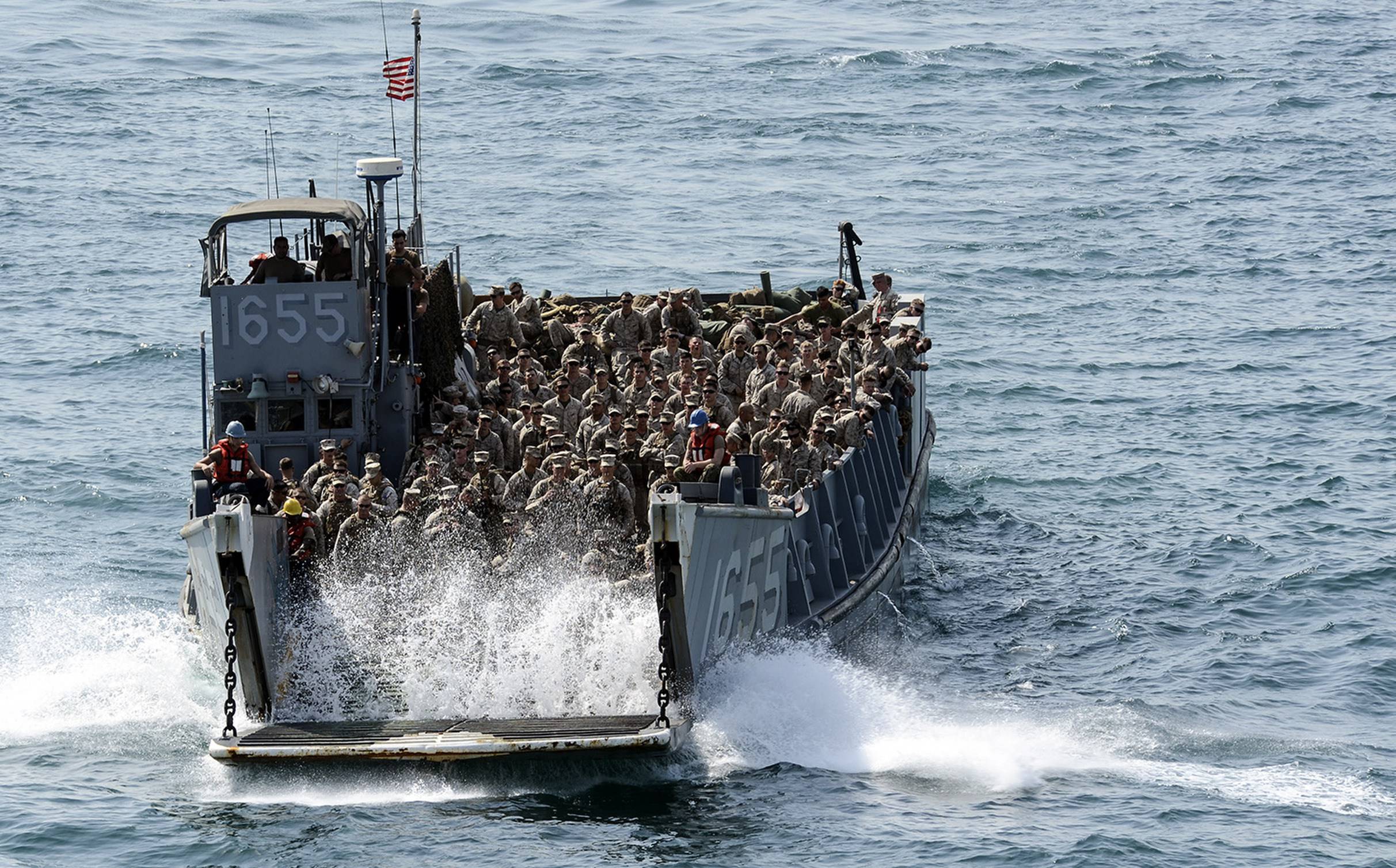 If the beaches are heavily defended, the Navy is supposed to bombard them prior to the landing. Occasionally the military and naval planners have been known to make deadly mistakes.

As pointed out in the comments, the debouching troops and equipment hit the beach much more quickly when going out the front. If there is too much fire from that direction, they may leave the "door" shut, and may go over the protected side. But this slows down the process, and reduces the equipment load.

Amphibious warfare provides a list of amphibious operations for modern wars. My father came ashore this way at Anzio. 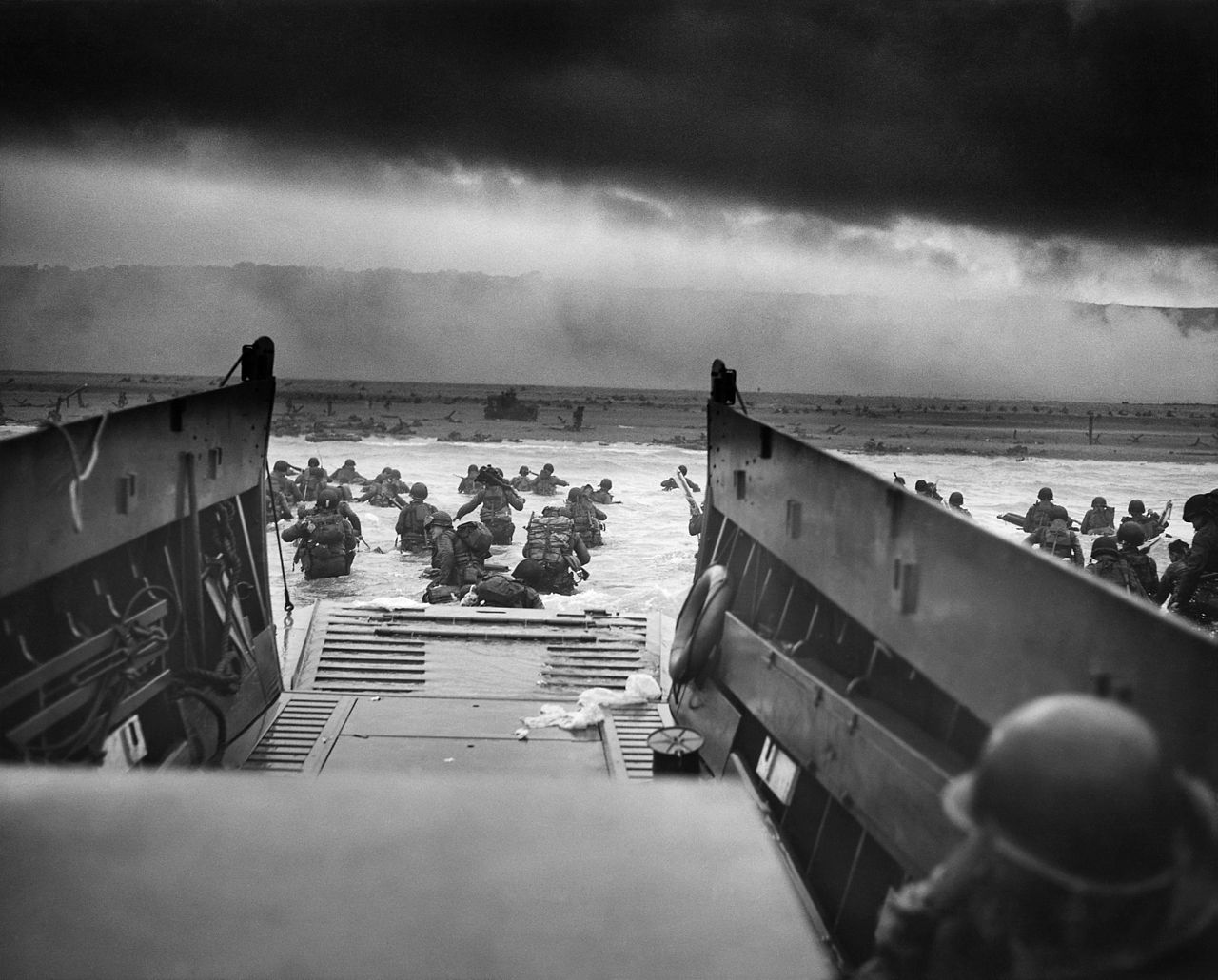 Image: Into the Jaws of Death: Troops from the U.S. 1st Division landing on Omaha beach as part of the Allied military campaign to free France from the stranglehold of Nazi Germany

The LCVP or Higgins boat was designed with one primary goal: to land a large number of troops quickly. Therefore it was important that:

Given this, the solution, inspired by observations of Japan's Daihatsu-class, was to install a large bow ramp so the passengers (which could be jeeps) quickly disembarked from the front into shallow water, but the rest of the craft was still in deep enough water to be able to drive back out.

So why not use rear exits, especially since it's a common feature of modern IFVs like BMP, Merkava or Bradley? The difference is that the LCVP isn't amphibious; disembarking from its rear means troops could end up in deep water and potentially drown in full combat load which made them sink, while not giving them a great firing position and also blocking the LCVP's return trip. With amphibious landers like the BMP, the vehicle can drive onto dry land giving its disembarking passengers great cover.

It's debatable whether having rear exits and forcing troops to swim to the front is better than being able to land more troops simultaneously and overwhelm defenders, but what happened at Omaha beach is the result of multiple failures, and a situation where the LCVP's design simply wouldn't have made much difference either way.

Not the answer you're looking for? Browse other questions tagged world-war-two strategy ww2-european-theater invasion dday or ask your own question.

17
Why were so few Luftwaffe attacks flown against the Normandy beaches on 6 June 1944?
6
Why are only the Normandy landings referred to as D-Day?
13
During the Normandy landings, were any German naval assets brought to bear against the Allies?
5
Did German win any victories between Normandy and Bulge?
11
Why didn't the Allies wait for the nuclear bomb before invading Normandy?
3
Landing strip in a besieged town on the eastern front
7
Did the Germans consider an amphibious landing for Fall Blau?
4
How were soldiers positioned on a platoon-sized amphibious landing craft in WWII?