How did they manage accuracy with traction trebuchets?

Traction trebuchets were the earliest kind of trebuchet, where instead of the more familiar counterweight, the force came from lots of men pulling ropes attached to the short arm: 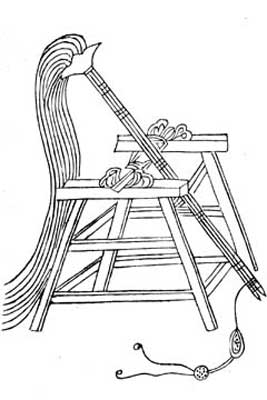 I'm not familiar with the physics, but since the force is provided via direct manpower, wouldn't it be difficult to manage its accuracy, such as when the men pulling the ropes get tired?

How did siege engineers manage accuracy for such a device? Were there any special techniques, or did they just try to get everyone to pull with the same force?

As Steve Bird implied in his comment, firing at a very large target that isn't moving doesn't require pinpoint accuracy. Nonetheless, some degree of accuracy would undoubtedly have been desirable.

W. T. S. Tarver, in The Traction Trebuchet: A Reconstruction of an Early Medieval Siege Engine (this link downloads a pdf) makes several observations "based on five years of experience with this kind of machine". Among them are:

By shooting as fast as possible (a bit over four shots per minute) the operator and the crew fall into a rhythm which makes the shots more powerful and consistent.

an even more effective method of shooting was discovered. Very simply, the crew counts to three, giving a light tug on each of "one" and "two," and hauling through on "three." This slightly slows the rate of shooting but coordinates the pull of the crew to a remarkable extent.

consistently sized ammunition is crucial for accurate shooting because the mass of the projectile is an integral part of the dynamic system which propels it.

On this last point, Tarver gives some examples of cluster patterns achieved by a team of 16 pullers:

….In 1989, I could usually strike a round target 10 m in diameter a distance of 90 m away on the second shot given consistent ammunition, and accuracy improved in 1991. Medieval artillerists took great care to control the weight of their shot, having each projectile chiseled to a near-perfect sphere.

Although "identical ammunition is best", Travers believes a skilled operator should be able to "compensate for variations of up to plus or minus 10 percent in mass".

In building and operating the traction trebuchet, Tarver made use of medieval illustrations and, most importantly, "the military manual of Mardi b. 'Ali b. Mardi al-Tarsisi, written around A.D. 1187", but he also points out that (being made primarily of wood) none have survived so it is impossible to be sure exactly how they were constructed. 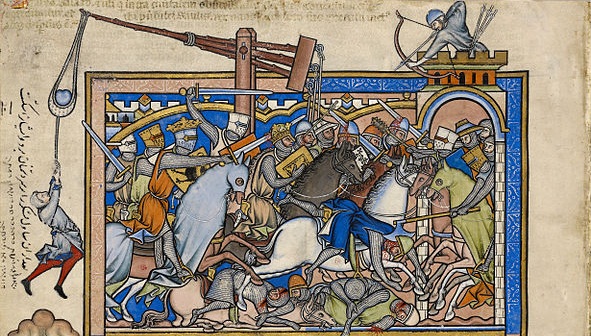 This illumination from the Bible de Maciejowski shows how, sometimes, the operator didn't release until he was off the ground. Attrib: The Morgan Library & Museum [Public domain], via Wikimedia Commons

A final point worth making is that traction trebuchets had a faster rate of fire than the more accurate counterweight ones so there was some compensation there.

Not the answer you're looking for? Browse other questions tagged military ancient-history middle-ages siege or ask your own question.

23
How did a besieged city/castle defend itself vs. catapulting diseased dead bodies into it?
39
How severe were the casualties in ancient/medieval battles?
16
How long did it take to build siege engines in the middle ages?
10
How did the Carthaginians manage to survive three years of siege?
13
How were fortification doors protected against fire?
8
How did the crusaders “know” that they found the Holy Blood?
51
How did they cook on ancient ships?
0
Barbarian Army sizes and how they compare to Medieval times
5
How is the accuracy of the Maya Calendar measured?