Before the advent of agriculture, was the whole world covered with forest? [closed]

When there was no clearing done by humans, were all the areas providing "tree-friendly" conditions coated by vast expanses of forest, or were there any naturally occurring grassy plains as there are nowadays (that is resulting from wood cutting, like those in Britain - I reckon that until the logging activities throughout the middle ages, forests there were not scarce either)?

By what means could forest be naturally prevented from spreading wherever there are favorable conditions?

This site, which includes many maps and references, describes how the vegetation cover of Europe has changed over the past 150,000 years. The map shown below shows Europe as it would be sans agriculture today.

This is the vegetation cover which would exist in the absence of agriculture, and which does exist at present in a highly fragmented form. Forest (green) predominates across most of the region, with deciduous forest across central and western Europe, and conifer forest (blue-green) towards the north and east. A steppe (grassland) belt exists in the south-east (yellow), with areas of forest-steppe (pink). Tundra (orange) exists in the far north where the climate is too cold year-round for trees to grow, and mediterranean vegetation - with hard-leaved evergreen shrubs and trees - predominates in parts of southern Europe (red).

Grass is a plant that has evolved to help cause, and itself survive, fires. Most trees don't deal well with fire, particularly in places where there's a dry season. So even without humans, yes grass existed as a plant, and there are various biomes where it naturally takes over.

This might be better understood with this graph based on temperature and annual rainfall. 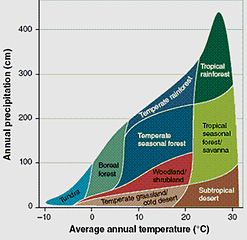 Humans in fact (Hominina to be exact) are viewed by many as one of the two branches of primates to evolve specifically adapted to grasslands when the African Savannah first developed (the other being Baboons). The main problem grasslands pose primates is how to get around without trees to swing from. Baboons solved this by going almost fully quadrapedal. Our branch solved it by going bipedal.

So it would be more accurate to say we didn't make the grass, the grass made us.

Not the answer you're looking for? Browse other questions tagged forestry or ask your own question.