Why did manuscript production increase rapidly?

What are the reasons for the significant increase in manuscripts being produced during the later medieval era? Was it due to improving financial conditions, or were there technological advances that simplified production techniques? 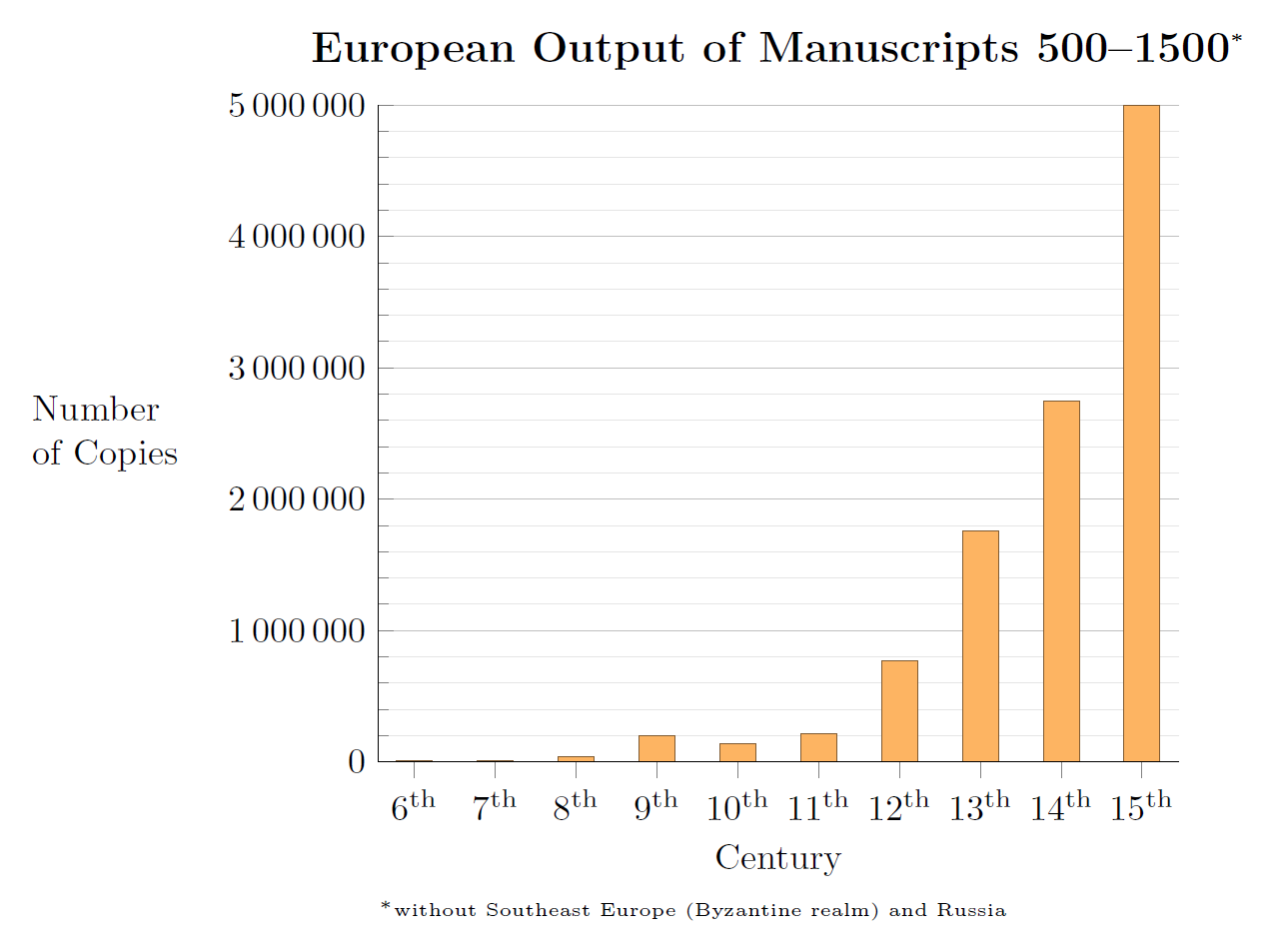 I find either potential explanation not to hold much water as these increase can be witnessed even in the midst of the Black Death, or the many disasters that befell European society during the 13th century. Also manuscript production is a process that seems predicated on extensive manual labour rather than technology.

What am I missing?

I'd say it was a combination of the growing economy and population, increasing urbanization, and the appearance and spread of universities (and other forms of schooling), which meant increased literacy and thus demand for books. There were some technological changes which made books cheaper and easier to produce, such as the shift from parchment to paper1 and the pecia system2, which probably contributed as well.

A good paper looking at this issue is Buringh and van Zanden (2009).

Up until the 13th Century, an important factor was the growth in the number of monasteries (the main centers of both book production and "consumption"), which followed the growth of the population and the economy. Beginning in the 12th and 13th Centuries, the combination of increasing urbanization and the spread of universities created a new source of demand for books.

As for the Black Death, Buringh and van Zanden have this to say:

The Black Death of 1348 and the resulting decline in population levels had a complex effect on book production. In the short term, output probably declined significantly ... However, after this temporary decline, production rebounded significantly, and an even sharper increase in output began, resulting in an almost tenfold increase in the next hundred years.

1. Paper production in Europe seems to have started in Italy in the 13th Century and spread northward to other countries in the 14th Century.

2. The Pecia system essentially parallelized manuscript copying by chopping a book up into multiple parts, each of which was copied by a different scribe. The pecia system was driven by the rise of universities: it developed as a way of supplying books to the growing number of students.

Not the answer you're looking for? Browse other questions tagged middle-ages book industry or ask your own question.

35
Did archers synchronize fire? Why?
7
Why did classical works re-emerge during the Renaissance?
2
Circa 1940, what was the oil production of each nation?
4
How would a date be written on a German manuscript circa 1445?
2
Why did German troops perform this parade near Szászház, in September 1916?
27
When planning Barbarossa, did Germany conceive of the Soviet migration of heavy industry?
11
When did Soviet authorities first plan/conceive of migrating their industry if war broke out?
6
How long did it take to bind a book in 13th century England?
13
How did the email client industry develop?
3
Why did typesetting allegedly “make it difficult for illegal copiers”?