Has there ever a period in history when people were not killing each other? [closed]

Has there ever a period in history when people were nice to each other and not killing each other?

In other words, since humans arrived, have the inhabitants of this planet ever enjoyed world peace?

To answer this, we first have to define period. Let's define period as a minimum of 50 years. If there are any periods of time without records, we will have to ignore those periods.

Now let's define not killing each other. By this, I mean no known battles, wars, or genocides on planet earth. I'm not referring to individual acts of violence.

As a curious side note, with over 5,000 questions asked on this StackExchange site, this is the first question to ever implement the peace tag. Well... almost... I just realized that I don't have enough rep to create a new tag, so perhaps a moderator will be kind enough to add it.

Research on history and prehistory shows that there was no such period, contrary to some common myths about "golden age", and "peaceful primitive people". Moreover, they argue that the chances of violent death in 20s century were lower than they were in the primitive societies. That is the fraction of total population killed in all wars in 20s century is lower than during comparable periods in prehistory. See, for example: Keeley, Lawrence H., War Before Civilization. Oxford University Press, 1996.

Concerning the historical times (after the invention of writing) the evidence is abundant: war was one of the main activities of almost all human civilizations.

Of course some local exceptions happen. There was no war on Canadian territory since 1812 (but Canada participated in overseas wars). Switzerland or Iceland probably did not participate in any wars for centuries.

People kill each other in many other ways (crime, death penalty, etc.) but I suppose you are asking about wars. In primitive societies where there is no legal system as we understand it, the difference between wars and crime can be fuzzy.

If you just mean wars, according to this graph from a University of Warwick study (by way of History Today), there was in fact a brief time in 1890 when there was only one war going on. 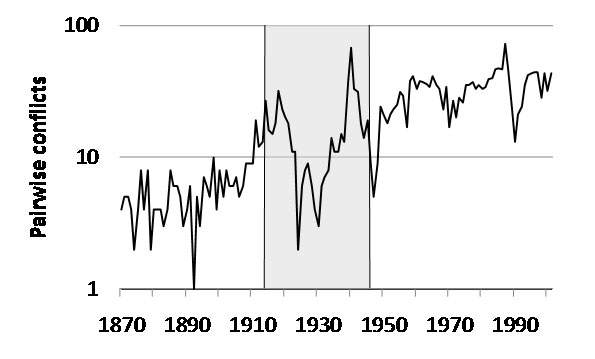 If you are talking person-to-person conflict, ie: murder, then no. Violence is a standard part of human behavior, shared with our chimpanzee relatives. Just like with chimps, the violence is largely (but not entirely) carried out by males. The natural conclusion here is that whatever common ancestor our two species had 4-13 million years ago, predominantly male violence was likely part of their behavior.

If history is to ever record such a time, Steven Pinkner argues that it is likely to be in our future, not our past. His Better Angels of our Nature argues that the rates of murder and death in warfare have been dropping for centuries. I'm not sure I buy that argument (reference the trajectory of the graph above), but I'd sure like to.

Not the answer you're looking for? Browse other questions tagged war battle genocide combat peace-treaty or ask your own question.

0
Have there ever been any instances of complete (or almost) world peace?