How did the Czech Legion get home?

The Czech Legion was allied with the Russian Tsars just prior to the Russian revolution. After the Bolsheviks took power, they were unable to return via Europe. So they crossed the whole of Eurasia over a period of years, and eventually exited the country via Vladivostok. In the process, they played an important part in the Russian Revolution.

The question is simple: How did they get home?

In the article above, they say this:

The troops dispersed aboard a series of ships that carried them back to Europe via the Indian Ocean, others sailed across the Pacific and through the Panama Canal. Eventually, all were repatriated.

I find this to be kind of a tease; of course they crossed oceans on boats to get home.

Were these Czech ships? British ships? Were they just passenger ships? What kind of ships were having Vladivostok as a port of call at this time? Who paid for them to get home?

(Here's the link to the Wikipedia Page for Czech Legion )

Indeed, as @TomAu has said, the evacuation of the Czechs (and Slovaks!) was handled by the US government, which also presumably paid for it.

I found a Romanian article about Victor Cădere, a Romanian diplomat operating at the same time and place with a similar objective: evacuation of Romanian nationals. This article provides some valuable information:

Meanwhile, the Allied Forces convened in Paris and decided that they first assess the means and the ways to meet the objective, i.e. prisoners' repatriation. The Convention between the United States and Great Britain, held at the end of 1919, decided that by collective effort of the two states some 64,000 people be repatriated. The United States were assigned the mission to deal with the Czechoslovak troops, i.e. some 35,000 people, whereas the British undertook to board the other troops, i.e some 28,500 people. According to a financial agreement concluded, Great Britain was to raise the amounts necessary to transport the people from the respective governments whose troops were fighting in Siberia. However, the United States benefited from different conditions – the amount of $12 million was lent to the Czechoslovak Government to ensure the transport of troops.

I don't quite understand the financial arrangements as detailed there, though: who was supposed to lend $12 million to the Czechoslovak Government?

Also, two ships that took part in the evacuation are identified there:

Indeed, wikipedia tells us about the former ship:

President Grant was transferred to the Army 6 October 1919. During the period January to November 1920, she served as the United States Army Transport Republic and made two voyages repatriating Czechoslovak troops from Siberia to Trieste.

Another ship I was able to find in wiki is USS Mount Vernon.

Finally, a master's thesis by Major Robert Dziak of the Czech army tells us that:

Totally, 36 transports were dispatched and over 67,700 people were transported through three main directions: First, around Asia, then via Suez Canal to Trieste; Second, across Pacific ocean, Panama canal, Atlantic ocean to Trieste or Hamburg; Third, through Pacific ocean to Canadian West coast, by rail road across Canada, then through Atlantic ocean to Hamburg. Many passengers were not members of the Legion. The transports took also care of the Legionaries’ family members, civilian personnel, and POWs. 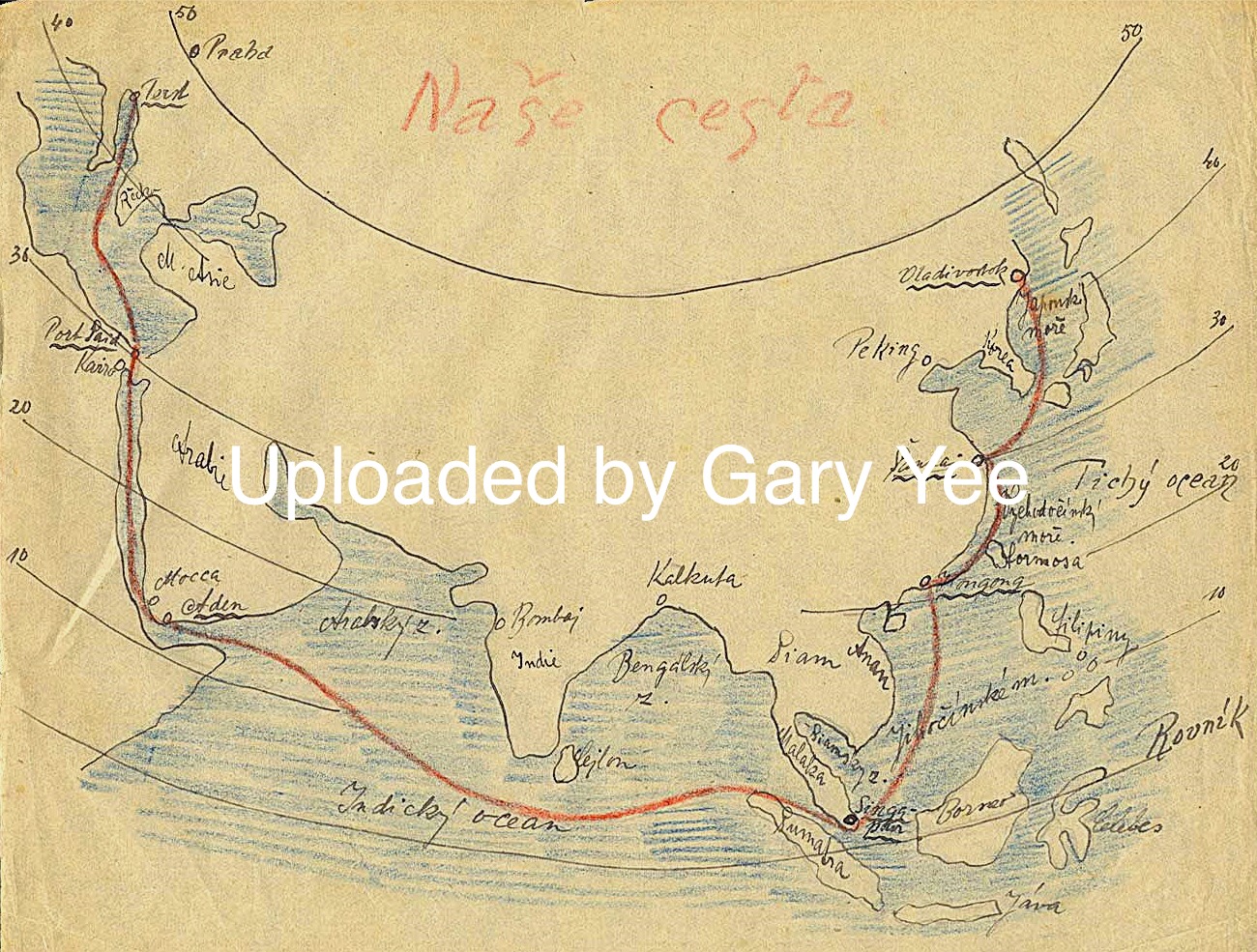 The USS Grant was just one of the vessels took 2-3 times the Czech Legion soldiers home. They passed several important ports including Shanghai, Hong Kong and Colombo. Mostly were shipping on the route Vladivostok-Shanghai-Hong Kong-Singapore-Colombo-Suez-Port Said-and finally arrived at Trieste, then they took the railway back to Prague. I am now writing a historical paper on this.

According to the Czech records, there were totally around 38 transports in 1919-1920 taking the Czech Legions home. Follows are part of the details on hand right now:

The Czechs were evacuated on mostly American ships, such as could be made available from time to time. Which is why many of them went through the Panama Canal. Some went through the Indian Ocean on British or even Japanese ships (Japan was an Ally in World War I, and co-operated with America in securing Vladivostok).

This was a pet project of President Woodrow Wilson, who first wanted to redeploy the Czech troops on the Western front (until the war ended abruptly in 1918). Then, they became an important part of point 10 of his 14 points. This was self-determination for the peoples of Austria-Hungary, which in practice meant the creation of an independent Czechoslovakia, among other things.

The U.S. fronted $12 million to send the Czechs home, which the Czech government agreed to repay over time. The British received a smaller amount on a "cash and carry" basis.

Not the answer you're looking for? Browse other questions tagged soviet-union russia russian-revolution czechoslovakia or ask your own question.

16
What is the longest retreat?
14
Did the Czech Legion bring POWs to Czechoslovakia? And if so, why?

16
How and why did Charles XII get to Poltava?
37
Did the Germans purposefully arrange to send Lenin to Russia to start a revolution?
4
Did the Soviet Union get a net border gain from China during World War II?
24
What made the Russian Navy suspect Japanese torpedo boats were in North Sea in 1904?
14
Did the Czech Legion bring POWs to Czechoslovakia? And if so, why?
2
How was the Free Czech Army formed in World War 2?