What is the story behind this photo? 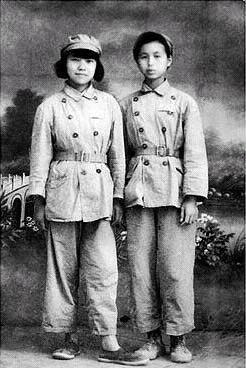 When was this photo taken? Who are the models?

This photo, in many places on the internet, even in this article on "Chinese wikipedia", is shown as an example of a Lenin Jacket (列宁装). It is shown as an example of a particular type of fashion, the Lenin Jacket. Apparently, the 1950s were years of strong Soviet influence that extended into the realm of women's fashion. From what I read, this was a fashion trend important to Chinese modernization.

Here are the specific questions:

Edit: Please note that this jacket, which is named "Lenin Jacket", and Vladimir Lenin are completely unrelated, except for their name. It is the name of a jacket. It is also unrelated to John Lennon of the Beatles.

Additionally, I am not asking about Vladimir Lenin or about Chinese Women's fashion; the link in the question to Antonia Finnane's book provides a ton of information about Lenin Jackets and other Chinese fashion topics. There are many other resources available. This question is specifically about this specific photo.

This photo shows a woman in a light colored lenin jacket as does this photo. They clearly show that it isn't a Mao suit. It closes at a position offset from center, and is of a different, more feminine cut than a Mao suit.

Was it published? If so, where? When did it start circulating on the internet?

The earliest source I could find is from a story published in roll.sohu.com. It's a story about the lifestyle of the Chinese people in the 1950s and 1960s.

Where was it taken? In a studio with a backdrop, or outdoors? In what city, country?

The story mentions a place named Nanjing, a Chinese city. It doesn't say whether it was taken there or not.

In what year was this photo taken?

According to a journal published by Korean Society of Clothing and Textiles, it was taken in the early 1950s.

Reference: Journal of the Korean Society of Clothing and Textiles - Vol. 39 , No. 4

Who were the people? (fashion models?, employees?, cadres? names, if possible)

The Journal or the story cited above doesn't say anything about who the people were.

What is the context of this photo? (eg, fashion, work photo, uniforms, news article, personal photo)

The story has detailed context of the photo. Furthermore, Georgetown.edu has a detailed report regarding the coat's context. It says:

Lenin Coat was especially popular in China during the 1950’s. It is a variant of open-collared and double-breasted suit. Similar kind of suit was common in Europe and had become a conservative choice during the first half of the 20th century. But it was a new fashion when it firstly entered China during Second Sino-Japanese War and Chinese Civil War.

In Russia, people did not especially relate this coat to Bolshevik spirit. But Chinese raised the image to show respect to certain ideology. I guess in some historical period, some people wanted to emphasize this layer of meaning and use the word “Lenin” to name the coat, which in turn changed the word’s first-order system.

Link to the full report.

Not the answer you're looking for? Browse other questions tagged china communism identification fashion modernisation or ask your own question.