How often were Soviet records faked?

In Viktor Suvorov's books, most notably The Liberators, Inside The Soviet Army, Inside Soviet Military Intelligence, a bleak picture is painted of a system where official figures were exaggerated or fabricated, corruption was widespread because no one of importance believed in the system, and that the economy's primary purpose was to supply the Red Army. In this context he argues that the entire system was given pretence only to confuse people at home and abroad.

For example: At one point Suvorov alleges that the entire civilian shipbuilding budget for the USSR was spent on military craft, and that civilians vessels were acquired overseas by other means. The budget was faked in order to pretend that the USSR wasn't just a military-industrial complex.

How accurate is this assessment? How widespread was the fabrication of Soviet records? Is it fair to say that the USSR's economy was dedicated to supporting its military, and that economic measures often used to compare with the USA are thus meaningless? Is there any investigation or evidence to justify this opinion?

As kubanczyk pointed out, Suvorov's premise was that the USSR mirrored Thomas Moore's book Utopia: where the society which attempted to create equality ended up enslaving its own people, and thus had to enforce that upon everyone else by being in a constant state of war. In strategic terms, the USSR needed to prepare for a war of global liberation, and thus their economy's only real purpose was to provide the means to achieve this.

The stated goal of existence of Soviet Union was to make its citizens happy, and to establish socialism in the whole world (to make all people happy). This does not mean that this stated goal coincided with the personal goals of the rulers (as in any other society, these things rarely coincide). The first goal had to be achieved by higher labor productivity in a socialist society and by more fair distribution of goods.

Prevailing opinion on how to achieve the second goal varied with time. On the early stage it was assumed that the proletariat of the other countries, inspired by the example of Soviet Union will make social revolutions and Soviet union will help. They also hoped that a world war will help. These hopes did not realize.

In the later years, (after 1960s) the prevailing (official) opinion was that as a result of "peaceful coexistence" and competition, socialism somehow will win everywhere. This hope also collapsed.

When it became clear to everyone that the life standard in Soviet Union is also far behind its main competitors, and is not increasing as expected, the Soviet Union lost its reason of existence and collapsed.

The system did not prove its expected efficiency. They lost the competition.

As I said in the beginning, the stated goals of an organization does not coincide with the personal goals of the individuals making this organization. The communist party which was planned as a governing body performing the "dictatorship of proletariat" quickly degenerated, and the real goal of many of its members was to hold its privileged position.

The Soviet Union started as essentially 150 million illiterate slaves, and within a half century became one of the world super powers, with nuclear weapons, a space program, world class physics and engineering. It developed its people to be educated, and to expect everyone to live a middle class lifestyle.

For comparison, imagine if a book were released which revealed that there are huge inconsistencies in some minor country's GDP growth numbers. Would anyone be surprised? or even interested in the existence of accounting inconsistencies? No, of course not. Why would anyone compare that insignificant state with the US?

What about comparing the Soviet Union and the United States economy? Does it make sense? It does; they are worthy of comparison. This means the reported numbers are not completely invalid.

Soviet and post-Soviet records were and are fabricated all the time, in huge quantities. In fact, the tradition dates much further back, to 18th century Potemkin villages. Before the 20th century these were rare, though, but in the Soviet Union massive falsifications were a way of life, and often the method of choice for make-belief economic growth. John Kerry was absolutely right when he called Russia parallel universe.

Residential building in the USSR, in million sq. meters. Blue = total, red = paid for by the customers. 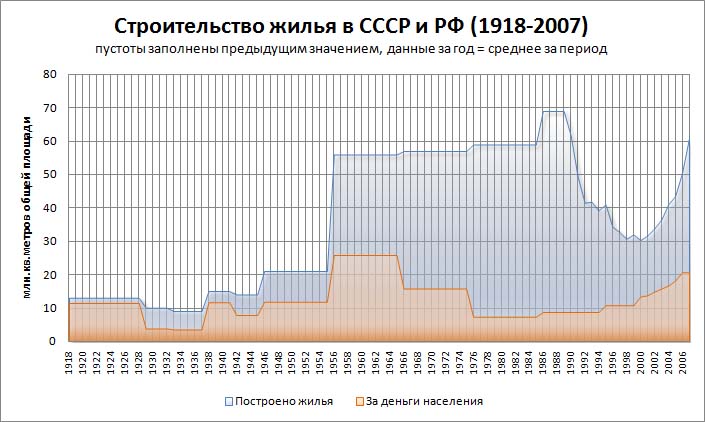 Not the answer you're looking for? Browse other questions tagged soviet-union cold-war historical-accuracy or ask your own question.

16
Was the population of Moscow wildly overstated during the Cold War?

21
Is there any evidence to support the claim that the US Strategic Defense Initiative played any significant role in undermining the USSR?
17
Were Soviet warships allowed to use the Panama canal?
5
How independent were the Eastern European countries from the Soviet Union?
8
Hitler's Dental Records
4
Did the USSR pledge support to Czechoslovakia before the Munich Agreement?
16
Why did the USSR stop in the Winter War against Finland in 1940?
1
Did America help the Chinese nationalists to repel the communist advance?
6
What was the Soviet reasoning for developing their Airborne Forces (VDV) into a powerful military branch?
15
Why did China decide to support Poland in 1956, but not Hungary?