The Penny Wedding - what are the items in the bottom right corner and why are they there? 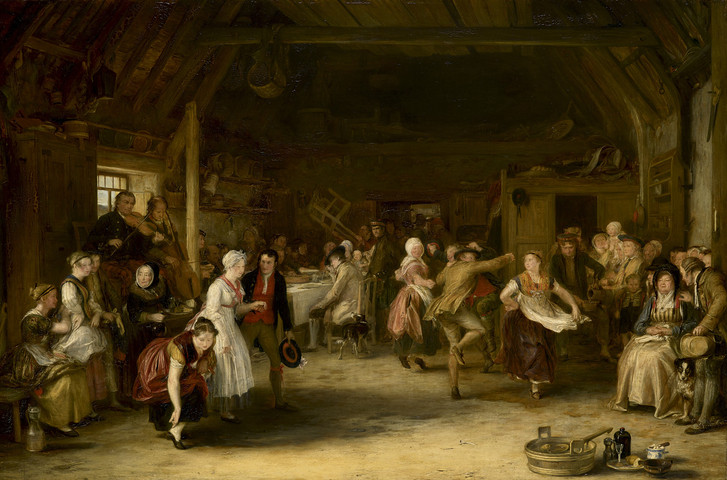 In the bottom right corner of a painting there is a set of items - a basin, a plate... - I wonder what are these items for (the basin especially) and why are they standing there, on a floor, far away from a dining table.

After some googling I've found a comment on the painting at "Bride Ales and Penny Weddings" by R.A. Houston - and these items are mentioned:

Originally entitled "The Scotch wedding", David Wilkie's painting , "The penny wedding" (1818), was geographically vague, though the Highland piper in the centre background looks decidedly out of place. Wilkie had toured the Highlands in 1817 before he painted "The penny wedding" and was particularly influenced by Perthshire. but he chose to fudge the geography of the celebration. If anything the costume is Lowland and the earlier Dutch-genre paintings of Scottish weddings on which his work drew, such as Emanuel De Witte's "The village dance" or "Lowland wedding", were explicitly Lowland, The clothing is at least a generation out of date. From this and the even older still-life artifacts in the immediate right foreground, we must conclude that the artist sought to suggest to his primarily English audience that this was something from the past. As articulations within a recognized order of symbols, clothes signified both time period and political orientation, here perhaps suggesting that Scottish society was moving on. Similarly the token Highlander indicates that the Highland threat had long passed and that Highlanders should be derided, pitied or romanticized. In Scotland itself a process of displacement was also taking place - perhaps perceptual, perhaps real - for contributory bridals became generically known during the eighteen century as "country weddings" where before they were prominently urban. Thus Wilkie drew on the ideas of the Romantic movement to give his viewers an image of what they wanted to believe about Scottish society.

It's a punchbowl with lemons, sugar, a strong spirit in the brown stoppered bottle, and a some nutmeg or cinnamon in the silver "pepperpot", and a large serving ladle.

Why is it on the floor? I don't know, just to display it clearly? I don't think it has any significance other than indicating they'd been drinking hot punch.

Here's a closer look at those items:

At least the bottle, the glass, the pewter pitcher (??), the pot containing something sugar cubes (???) and the dish with some fruit (lemons???), are expected to be placed on the table. So, they may indicate that one or more tables had to be removed so there's enough free space to dance (since it's a penny wedding, people had to use the present venue for the banquet even it's quite cramped for such an occasion). It may also indicate the point of time shown on the picture - at the end or after the banquet, the dancing has just begun.

Not the answer you're looking for? Browse other questions tagged 19th-century england or ask your own question.

11
What were the Government Press Prosecutions of 1858 and why did they occur?
7
What is the motivation of having heavy infantry to the right and light infantry to the left flank?
11
What exactly were currours, and what were they used for?
7
What was the social and cultural role of a "country squire" in Victorian/Edwardian England?
3
What primary sources are there for Charles I's seizure of gold from the Tower mint?
13
Why was there little nonwhite migration to Europe in the 19th century?
8
What are these items in this 16th century plan of an English town?
10
Are there recorded incidents of the Gentlemen Pensioners protecting the monarch in the 16th century?
5
What are the "blue books" of Mr. Balfour?