Sources for archer vs other unit comparisons? [closed]

Going around the web and gathering info about units gets you in an avalanche of information that can takes years to sort out.

You can research historic battles but most of them are imbalanced in one way or another and its hard to get usable data.

When people ask me how to accurately compare an archer to a footman i have no idea what to tell em. I've built up an arbitrary comparison over the years and its what I use, but relaying it to others or justifying it to superiors is quite a murky realm.

Anybody know of a source that has simplistic comparisons?

100 shortbow archers are charged by 100 swordsmen without shields or arrow stopping armor.

100 shortbow archers are charged by 100 horsemen without shields or arrow stopping armor.

How many of the melee troops roughly would actually make it to the archer line?

We know that if few reached the line they could break it. And this many times is achieved by surprise or particular tactics or terrain advantages. But what does the data look like when these units started out of range and went at each other at a direct line on a level field.

The basic data is hard to come by. Building on top of is actually way easier as you can scale armor up by tapping many sources that have distilled data on arrow penetration rates for the various armors. Even archer accuracy is easier to come by than this.

This is esentially the core of combat in a game when you strip advanced ai considerations and factors and just have units go at each other when half have 1 range the other half have more than 1 range.

This is essentially the core of combat in a game when you strip advanced ai considerations and factors and just have units go at each other when half have 1 range the other half have more than 1 range.

What you described is Totally Accurate Battle Simulator which is anything BUT a totally accurate battle simulator. It's a joke, but the joke perfectly illustrates why this sort of comparison is useless in reality. The game lets you do exactly what you want, line up 100 poachers (shortbow archers) against 100 swordsmen and let them go at it. 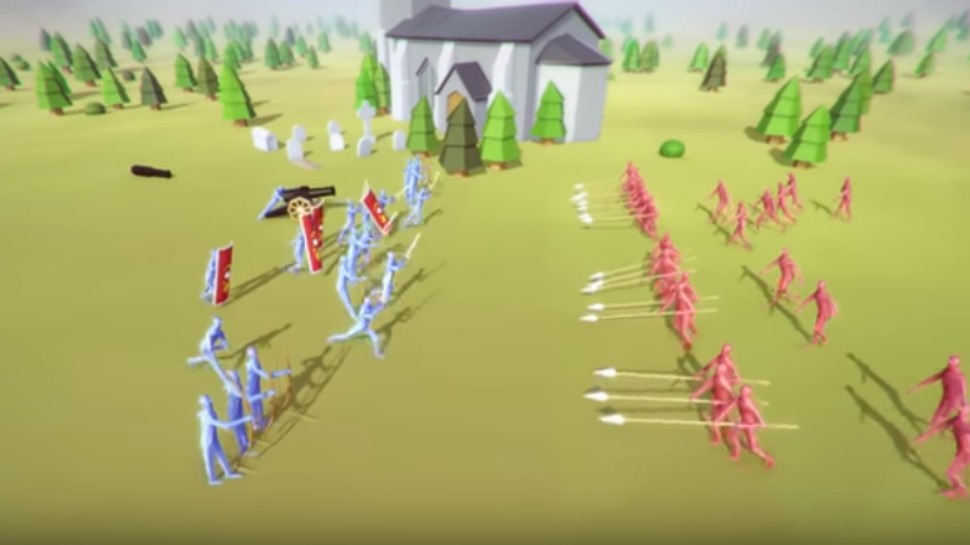 This isn't how battle works and Totally Accurate Battle Simulator hilariously illustrates why.

No, the core of combat is not numbers or types. It's all the things KorvinStarmast covered. Terrain. Training. Communications. Logistics. Morale. Tactics. All these are far more important than mere numbers and types. Hannibal Barca was able to humiliate the armies of Rome for years not because he had X light cavalry or Y heavy infantry, he was usually outnumbered, but because he outmaneuvered and out-thought the Romans. The Battle of Cannae, still studied today as one of the first examples of a pincer movement, was won by superior tactics.

The game which best encapsulates everything that goes into an ancient battle is probably the Total War series. Unlike many other RTS they model terrain, formation, and morale. Give Total War: Rome or Medieval II: Total War a shot. You'll learn some hard lessons.

For modern combat, there's probably better ones now, but I always liked the Close Combat series. It attempts to model morale, experience, and stamina. It drastically changes your tactics when, for example, your infantry simply refuse to charge a machine gun. Or when you can use suppressing fire to keep the enemy's heads down.

Skallagrim has a good video about all this: The pointless question: "Who would win?" (samurai vs knight, etc).

The comparisons you present are incomplete, to the point that they have little meaning1.

Most battles were not fought on a flat, featureless piece of terrain.

The US Army teaches an analytical method: METT-T, {now METT-TC}. Mission, Enemy, Terrain, Troops available, Time, and {civilian (non combatant) considerations}. It's a very good template for assessing relative chances for success depending on the situation. Given the troops you have in question, you need to flesh out those factors to weigh relative prospects for each unit to accomplish its mission.

Without the minimum framework of terrain, time, and mission your example question has no meaningful answer. The troops (archers) may not even fight if there is no mission, but instead may flee, withdraw, or otherwise avoid contact. On the other hand, if they are defending their home village, they might fight to the death, use cover, etc.

For a historical example of how critical terrain is, T.E.D. made this point in a comment.

Terrain is crucial. For example compare longbows with heavy cavalry. If the ground is conducive to cavalry charges, the longbows may get off a volley or two before getting overrun. However, if its bad ground for cavalry (eg: a swamp), you get Agincourt; the cavalry is massacred.

An additional example would be the battle at Thermopylae.

1 ... beyond assigning point values for troops for table top miniature games like Chainmail

Not the answer you're looking for? Browse other questions tagged middle-ages warfare or ask your own question.

26
What are good online sources for historical maps?
3
First-hand sources for medieval urban life in central Europe
11
What exactly were currours, and what were they used for?
4
From how far away could an experienced and skilled archer hit a man?
0
What sources do we have on the 5th Century AD in the Gauls and Roman Empire?
10
Are there equivalents of the Domesday Book for other (French or German) duchies?
1
Was there a nation/state which conquered other ones to gather forces and fight against an even greater enemy?
0
Why the belt or strap in some plate armor and some other armor exposed in the middle front side?