How old is the Classic Arabic language?

Wikipedia has this to say about it:

However, let's consider Vabalathus, the son of Zenobia, empress of the Palmyrene Empire, who lived in the 3rd century:

Lucius Iulius (Julius) Aurelius Septimius Vabalathus Athenodorus (259-273) was a king of the Palmyrene Empire. Vabalathus is the Latinized form of his name in the Arabic language, Wahb Allat or gift of the Goddess.

The important part is "Latinized form of his name in the Arabic Language."

What form of the Arabic Language was spoken in the mid-3rd century?

A contemporary talking about Wahb Allat/Vabalathus might have used Old Arabic. A classification debate continues over which regions had more influence on the formation of Classical Arabic, a regional standard several centuries later. Hetzron (1997) provided a classification of Semitic language heritage. Britannica shows the relationships like this: 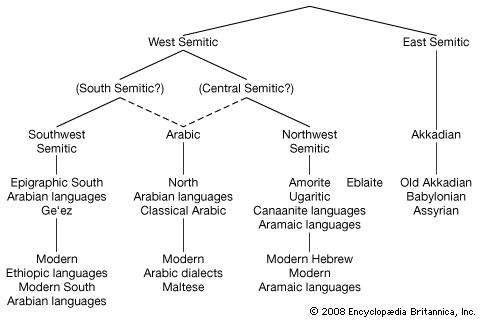 Not the answer you're looking for? Browse other questions tagged roman-empire or ask your own question.

19
In what language did Caractacus deliver his speech to the emperor Claudius?
46
How did the Roman state verify citizenship?
11
Why was a 10-year old kid appointed consul?
7
How big a factor was the failing economy to the downfall of the Roman Empire?
13
What was the northernmost region/city in the Roman Empire that spoke Greek as the native language?
23
Why did the Romans change Europe's language, but the barbarians didn't?
9
Why did Constantius Chlorus decide to become a Flavius?
10
Was there a Roman city in the Plain of Sarajevo?