Is there any science behind this graph that suggests we'd be exploring new galaxies if not for the dark ages?

I stumbled on this "graph". While it is clearly a dank meme, I was wondering if there was any actual science behind it: Is there anywhere a measure of scientific discovery per unit time? Do we have anywhere a scale of scientific knowledge and if so, what is it based on? 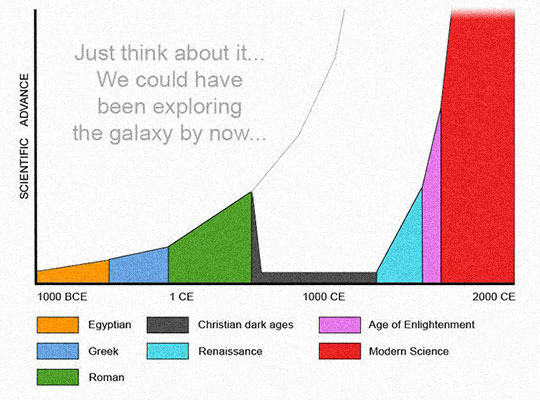 The title question asks if there is any science behind the graph and the short answer is "No, not really".

This article is a justification of the graph by its creator. In it he states that the graph is his interpretation and approximation of the advancement of science through time (in Europe). It's used to support the author's "hypothesis" that Christianity was "the antithesis of science".

He offers little but personal opinion to support the shape of the graph and even admits that its guesswork:

Could a graph be made to show scientific advancement if you did have all that information?

The graph and its article obviously have an ax to grind against "Christianism", and the graph is an ilustration of his ideas about the subject, not of the reality of scientific development.

The graph is obviously problematic, and no article can save it. Here are the main problems:

In sum, the graph is a mere impressionistic illustration of a thesis that is at best simplistic. There is not only no actual measurement of anything (as the article recognises), but it doesn't show any real understanding of the dynamics of "progress" during the enormous period it attempts to illustrate.

Not the answer you're looking for? Browse other questions tagged science or ask your own question.

9
Since when and why do some academic publishers use, prefer or enforce endnotes instead of footnotes
2
When did the spherical shape of the Earth become common knowledge?
72
Did ancient peoples ever hide their treasure behind puzzles?
2
Was there Church opposition to heliocentrism in 1600?