Did the Confederate States use a plain oval CS buckle during the Civil War?

The discussion at treasurenet.com has some well informed people on it. But one point it raises is not confirmed by anyone who seems to know. (The link comes from Why were US "Cavalry" belt buckle backs filled with lead?.)

That is that an expert on Pawn Stars apparently said the Confederate States never used a plain oval CS buckle (like the common plain oval US "cavalry belt buckle") during the Civil War.

Many established sutlers sell such plain oval CS buckles, and call them "exact reproductions." But so far none that I have found claim any source for such a buckle's original, unlike the US oval where they often say it is a reproduction of one found on this or that battlefield.

Can anyone find a clear confirmation or refutation of the Pawn Stars expert's claim?

Now I see Parsley's Brass has one found at Watt House Hill, Virginia, where there was (at least) a battle in 1862. The answer by @Steve Bird establishes, as he says, that such a buckle was not regulation in 1864 (or maybe just not used on sword belts but I'll go with not regulation). But I also understand that CS uniforms were a bit chaotic throughout the war. So I am not sure what to think.

Was it regulation at some other time? Conversely do other authorities besides on Pawn Stars say such buckles were not used?

The book cited by Steve Bird in a comment has at least one plain oval CS buckle on its cover (plus some ovals that may be box plates--but persuasive sources say the CS had no resources to waste on brass box plates). But I do not know if the book concludes they are genuine. I am trying to find the book on interlibrary loan but it is not going quickly.

Following that lead I found Fakes reproductions replicas with an extensive discussion of how many honest and dishonest ways non-genuine materials get on the market as genuine. It gives dozens of examples of non-genuine CS ovals but describes many of them as copies---as if there were genuine originals to copy. It is not clear about that.

I believe the CS Oval buckles existed, but the number found may be extremely low, as they were not actual issued gear as with the Union buckles. 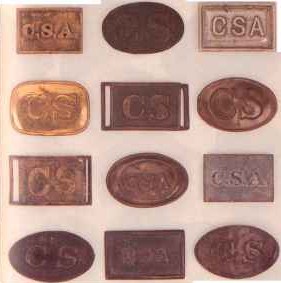 Several of the buckles in the Virginia Historical Society's Maryland-Steuart Collection, Richmond, VA that I used to cast my master patterns.

The image isn't great, but it lists a museum source.The CS ovals appear irregular, which would coincide with the PBS story concerning civil war buckles:

...as the original Confederate buckle-makers were usually amateurs, and their lackadaisical craftsmanship is easy to replicate.

This points out the buckles were not mass produced like those of the North.

In the North, the Union had the industrial resources and was able to die-stamp as many as a million of these buckles.

Back on the Hanover Brass site, this page provides images of several CS Oval buckles, and lists the source location where the original was 'dug'. The page also contains an image of a Confederate soldier wearing a CS oval buckle. 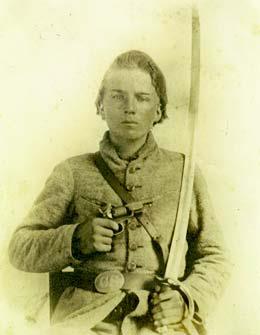 The image is also repeated thoughout the web in other locations, but I cannot find an original source for it. I did scan the National Archives civil war photo collection, but found no image there of a Confederate soldier wearing a CS Oval.

The Regulations for the Army of the Confederate States, 1864, in the section on uniforms states (on page 409) that:

For all officers and enlisted men - gilt, rectangular: two inches wide, with a raised bright rim; a silver wreath of laurel encircling the "arms of the Confederate States."

The Regulations for the Army of the Confederate States, 1862, uses identical wording (page 405).

Similarly, this book on the Uniform and Dress of the Army of the Confederate States printed in 1861, also uses the same wording to describe the belt buckle (which is matched in the illustrations of the uniforms).

which suggests that if these "CS" buckles did exist, they were either not used on sword belts or they were non-regulation (at least between 1862-4).

Not the answer you're looking for? Browse other questions tagged american-civil-war uniform or ask your own question.

10
Why were US "Cavalry" belt buckle backs filled with lead?