Between which years did a trend of violence toward homosexuals begin and end in America?

Recently, I watched Brokeback Mountain, which depicted the violence risked by anyone who came out as openly homosexual. It seems like a point I might like to make in discussion one day that "only x years ago we as a society were commonly attacking and even killing people who were gay." To point out our long and very recent history of acting terrible as a society and not even realizing it.

Note: as for when the trend began, I mean globally, but since it hasn't ended in many countries. I am only asking about the end of the trend in America.

The trend of violence against homosexuals has not ended in the US, but the tide certainly has turned so that it is no longer given a blind eye in most of the country. 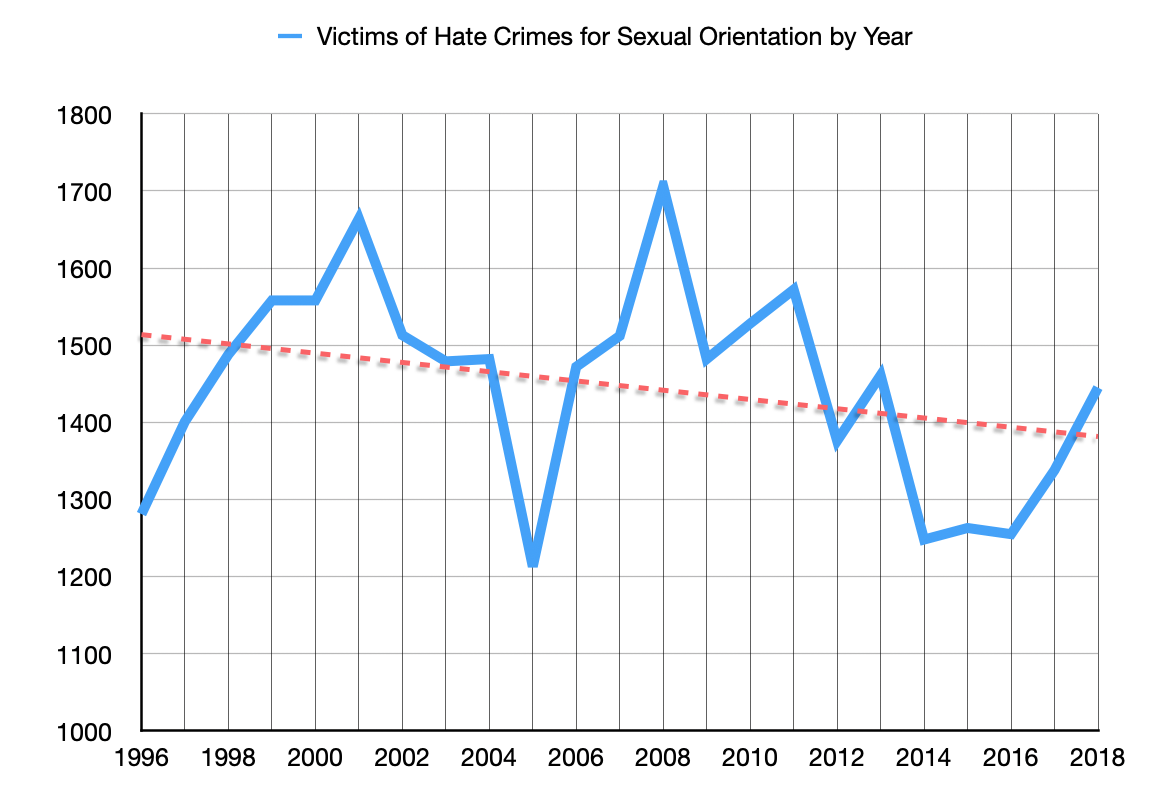 But that's very broad for our format. Instead, I'll trace the evolution of LGBT rights in the US through a number of landmark social, executive, legislative, and judicial decisions. This history will be colored by having lived through and participated in some of this.

The 50s and 60s saw attempts at "rehabilitation" of LGBT folks, as if it were a disease or mental disorder exemplified by the 1952 American Psychiatric Association decision to list homosexuality as a mental disorder.

It also saw official and unofficial legal harassment with the FBI and Post Office tracking LGBT people and material. Being suspected or outed as LGBT could cost you your job and business as well as public humiliation in the newspapers.

1969 saw the Stonewall Riots when the Stonewall Inn was raided by police to check for LGBT violations, a regular occurrence. Instead of fleeing, LGBT and the community gathered and a riot broke out. The riot and escalation lead to public awareness and scrutiny of police and legal violence against LGBT communities joining with the Civil Rights Movement.

In 1980 the Republican Party adopted much of the platform of the Christian right allowing the Democrats to differentiate themselves as the party of social and religious freedom. Homosexuality was now a campaign issue.

The AIDS epidemic in the 80s, being fueled in part by repression of discussion of sexuality, lead to more people coming out and discussing AIDS, sexuality, safe sex, and homosexuality. This began the process of normalization for a generation.

In 1990 the First Gulf War saw the first major combat deployment of the US military in a generation. This shined a light on the US military's very open policy of LGBT discrimination. Many felt a citizen should be allowed to fight for their country regardless of their sexual orientation. This lead to the famous Don't Ask, Don't Tell policy in 1994 which ordered the military to stop trying to out homosexual soldiers. But the behavior was still disallowed and if you were found out you were still out.

With increasing ability to be openly gay, the spotlight fell on marriage discrimination. In the US, your marriage status conveys many legal benefits such as tax breaks, child custody, and inheritance. This was increasingly seen as unfair to heterosexuals. Homosexuals fighting to marry, live together, and even have children called into question the idea that homosexuality was about nothing more than sex. People began to argue that if you value family and tradition and stability, you should allow homosexuals to settle down and have stable families.

The Defense of Marriage Act (DOMA) in 1996 was a backlash to this. It sailed through Congress showing a growing rift on LGBT issues between the people and Congress. The wording "defense of marriage" was part of a political campaign to paint US and Christian traditions as under attack, rather than dismantling their privileged legal and social position. "Family values" and "traditional family" now became euphemisms for anti-LGBT agendas.

Rather than stop the marriage equality movement, it merely moved it from the federal to the state level and brought it into focus. DOMA only applied to the Federal recognition of marriage. States could still recognize same-sex marriage if they wanted to. This split it into a fight to change the laws and constitutions of the 50 states, in addition to existing blue laws and sodomy laws. Marriage equality would be the vanguard for LGBT rights.

Various methods were used to erode DOMA. First, "domestic partners" and "civil unions" were used to side-step the legal and societal objections to "changing the definition of marriage". People who would otherwise be married, as well as people who were simply living together as partners and had no interest in being married, could be given benefits similar to a married couple. Starting in 1992 with Washington DC, then Hawaii in 1997. But these relatively small states were not a major concern. But in 1999 California, the most populous state, allowed domestic partnerships and continued to expand their privileges.

This caused a new problem. US states generally accept the licensing of other states such as marriage or a driver's license. It was also accepted that you could travel to another state to get married to dodge restrictions, famously by going to Las Vegas. Homosexual couples began traveling to other states to get married and then return home with marriage license in hand expecting it to be honored. States with strong anti-LGBT governments or populations began to question whether they would accept these licenses calling into question centuries of interstate cooperation.

Various popular referendums on marriage equality, even ones that were shot down, showed growing and inevitable support for marriage equality as a new generation who grew up being more comfortable with LGBT people began to vote. It was no longer political suicide to voice support for LGBT rights, or to even be openly LGBT.

There was also a legal backlash. As various laws and court rulings began to allow same-sex marriage, attempts were made to put the ban back in place. Where it was declared unconstitutional by "activist judges" (another euphemism), the state constitution was amended to ban marriage equality.

It was a bitter and vocal fight that got national attention. Prop 8 passed, but famously many California government officials spoke out against it even after it passed. Supporters of and donators to Prop 8 were outed and boycotted. It was no longer acceptable by a significant amount of people to be anti-LGBT.

Prop 8 finally brought in a Federal ruling on marriage equality. Hollingsworth v Perry found that banning same-sex marriage violated the Due Process and Equal Protection clauses of the 14th Amendment of the US Constitution.

This ruling opened the flood gates for citizens to bring the marriage-equality bans of the various states to Federal court, but the Supreme Court refused to hear the cases saying it was a matter for the states.

Meanwhile DOMA was under attack in Federal court in United States v Windsor. To show how much things had changed, the Department of Justice declined to defend DOMA. In 2013 the Supreme Court finally ruled 5-4 that Section 3 of DOMA was unconstitutional "as a deprivation of the liberty of the person protected by the Fifth Amendment".

This places same-sex couples in an unstable position of being in a second-tier marriage. The differentiation demeans the couple, whose moral and sexual choices the Constitution protects, ... and whose relationship the State has sought to dignify. And it humiliates tens of thousands of children now being raised by same-sex couples.

With the Supreme Court finally giving a definitive ruling on constitutional grounds, the remaining state and federal restrictions on marriage equality rapidly crumbled. With more people now openly LBGT, popular opinion clearly and measurably turned against LGBT discrimination, and lacking legal or judicial means to continue to their oppression, it was no longer viable to be openly anti-LGBT.

Even having lived through this, it's amazing to think it's been only 3 years since US v Windsor.

The first part of your question is based on a false premise (or presumption), which is that "...the trend to violence towards homosexuals has ended...". There are no indications that the mentality and the way of thinking, regarding homosexuals, in some social groups has changed.

I'm interested to know historically has open homosexuality always been a subject of rejection and disgust? Or is that a trend that began during a specific era?

In ancient Greece homosexuality was, if not a norm, at least not a subject of disgust. The same could be claimed for the ancient Roman Empire. It should be noted that, in both examples the classification of sexuality was performed based on different criteria, namely, in terms of sexul activeness and passiveness, or in other words, of dominance and submissiveness.

...as for when the trend began, I mean globally...

Nowadays perseption of homosexual relations is rooted mostly in the moral and ethical code presented in the Bible (and later in Qur'an), gradually translated in laws in the Judiciary Systems and later spread throughout the World via the colonization process of the last 5 - 6 centuries.

Which year...did a trend of violence toward homosexuals begin in America?

The strong social movements of the late 50's and 60's shed light on the subject of homosexuality and violence, and since then it has become an important social problem, seeking solution from the widespread public in the US, and later in the areas of influence of the Western World.

P.S. There is an interesing documentary by Stephen Fry which investigates homophobia and its origins throughout the World. One of its conculsions is the importance of laws and their latency, "inertia", long term effects and consequences on society.

Arguably violence against homosexuals hasn't ended; I believe homosexuals are still significantly more likely to be the victim of violence.

The Stonewall riots are probably the inflection point where the tide turned.

Not the answer you're looking for? Browse other questions tagged social-history lgbt or ask your own question.