Why is this Roman bust identified as Arminius?

Wikipedia and Britannica show this bust in their articles about Arminius: 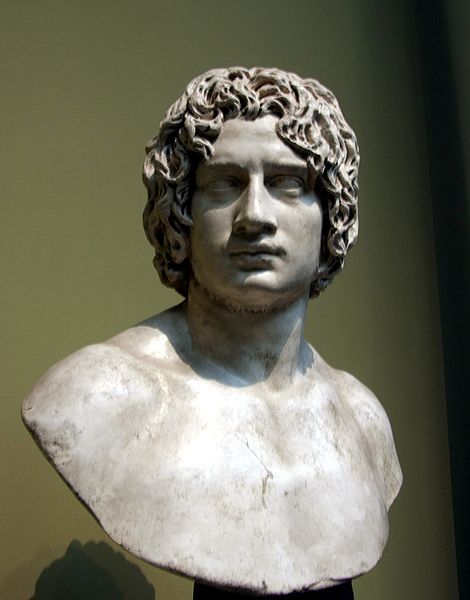 The caption in Wikipedia says:

This Roman sculpture of a young man is sometimes identified as Arminius.

The description in Wikimedia Commons is this:

German, so called Arminius. Cast in Pushkin museum after original in Dresden

Besides being found in Dresden (I guess), What reasons have led some historians to identify this as Arminius?

Doesn't look much barbarian to me (what, no moustache?)

The earliest reference I've found to this bust is from 1854, in the section 'Supposed Bust of Arminus' of The Ruins and Museums of Rome: A Guide Book for Travellers, Artists, and Lovers of Antiquity by Emil Braun.

The author states that apperently this bust was earlier identified with Cecrops, but

The supposition of a professional archaeologist which reached me indirectly, that this bust may represent the hero of the Teutonic civil war struck me as a highly suggestive idea.

The author agrees that

The abundant hair the incipient down on the chin the rather massive cheekbones announce the son of the North.

The article also states that the bust was originally found near Naples, and the Britanica article lists it as in the Capitoline Museum, so I don't find any significance to the Dresden reference, unless that is its current location.

The consensus seems to be that the hair is too un-Roman like, and in fact, if you look closely, the trace of that 'barbarian' mustache is visible over the lip. Some more recent works such as Four Days in September: The Battle of Teutoburg by Jason R. Abdale discuss that this may have been a more generic image of the 'Germanic Barbarian' type.

Not the answer you're looking for? Browse other questions tagged ancient-rome roman-empire art or ask your own question.

23
What role did the Eastern Roman Empire play in the fall of the Western Roman Empire?
47
How did the Roman state verify citizenship?
5
Do busts or statues exist for all the Roman emperors until the fall of the West?
13
What kind of device is pictured on this Roman mosaic from Villa Tellaro, Sicily?
2
Why is Sulla's nose in the bust in Munich Glyptothek broken?
2
How is this pattern from Pompeii also in Cappella Sansevero?
20
How do we know this bust is Aristotle?