How long would it take to travel from England to the colonies in the early 1700s?

I am working on a history project for school and cannot seem to find information on the length of a journey on a ship from England to the Charleston area of South Carolina in the early 1700s (1730-1740). Additionally, would the upper class travelers face different conditions from the middle class?

How long would it take to travel from England to the colonies in the early 1700s?

The distance from England to the Charleston area of South Carolina is: 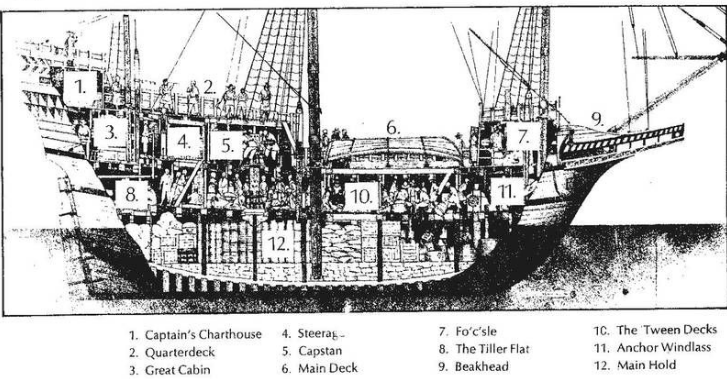 Would the upper class travellers face different conditions from the middle class?

As an example of the conditions faced by the middle and lower class:

...The passage to America was treacherous by any standard. Many of the immigrants were too poor to pay for the journey and therefore indentured themselves to wealthier colonialists - selling their services for a period of years in return for the price of the passage. Crammed into a small wooden ship, rolling and rocking at the mercy of the sea, the voyagers - men, women and children - endured hardships unimaginable to us today. Misery was the most common description of a journey that typically lasted seven weeks...[1]

1. Dependent on their size (Hull speed) and the winds. .

2. About the same time Ben Franklin measured the (6 degrees) warmer temperature of Gulf Stream and created a map which would turn out to be very useful to sailors ("riding it the trip would shorten with a week").

which includes the one proposed above, however, if the general idea is understood the above calculation could be applied to any of the shown routes.

Dutch shiping routes 1750-1800 visualised using modern mapping technologies are closer to the proposed in the comment:

together with Spanish shiping routes in the same period 1750-1800:

When John Adams sailed to France in 1777, the voyage took six weeks.

Accompanied by his oldest son, John Quincy, Adams embarked on a six week crossing of the Atlantic.

Not the answer you're looking for? Browse other questions tagged united-states 18th-century colonial-america or ask your own question.

4
How long did it take to sail from Philadelphia to Boston in the 1700s?

24
How long did it take for a diplomat to travel between Berlin and Vienna in the 1770's?
13
Why was slavery profitable in the Southern colonies and not New England?
8
How much would votes sell for in early America?
4
How long did it take to sail from Philadelphia to Boston in the 1700s?
8
How did Britain govern the thirteen colonies?
7
Do we know who graduated from the University of Mexico in the 1700s?
29
How would a family travel from Indiana to Texas in 1911?
1
How long to travel from Ireland or England in 1680 to Plymouth in the Massachusetts Bay Colony?
0
In the Middle Ages - 18th century, how long would it take for a blacksmith forge a regular farming scythe to a war scythe?
7
In 18th century America, how did people board ships to travel long distance?