What was the population of Indian subcontinent in 1000 AD?

This estimate is rejected by K.S. Lal who claims its population was about 200 million in 1000 AD.

K.S. Lal concluded that the population of Indian subcontinent in 1000 was about 200 million ...K.S. Lal on Wikipedia

I will post the estimation made by Angus Maddison, who declares 75 million people. Since he does not include data for that year for Pakistan and Bangladesh, I assume that their population is included in those 75 million.

My Go-to source for population numbers is McEvedy and Jones' Atlas of World Population History. It shows the Indian subcontinent with about 79 million people in 1000CE (very close to your first number). There was a more or less steady asymptotic curve up from there, with no noticeable reversals. Here's their graph: 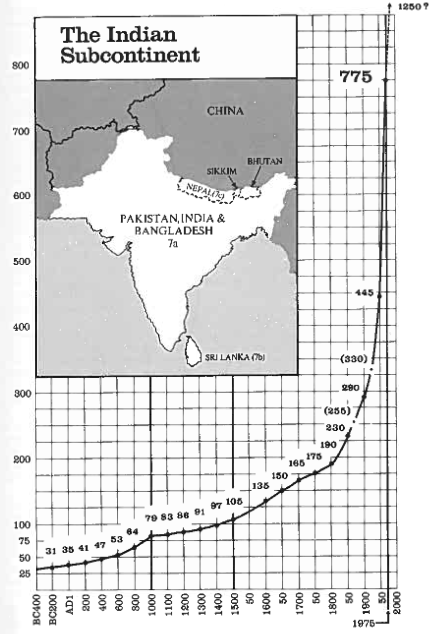 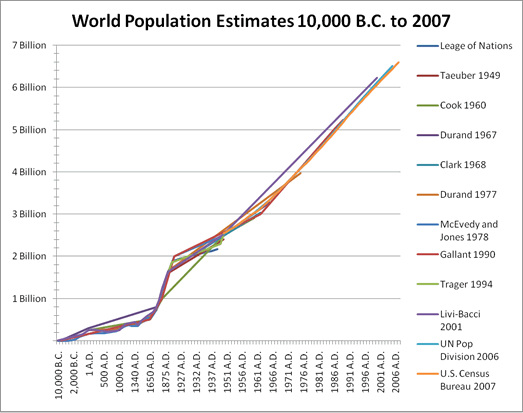 Not the answer you're looking for? Browse other questions tagged india population or ask your own question.

3
What was the population of Muslims in the Indian subcontinent in 1800 AD?

10
Where does Akbar the Great's "Great" come from?
10
Who introduced Yoga to the West?
3
What was the population of Muslims in the Indian subcontinent in 1800 AD?
2
How do you estimate world population of 1000 years ago?
11
When did Northern India and N. China begin to dominate in global demographics?
2
What prevented the Indian Army to wrest Kashmir from Pakistan despite the UN Security Council's resolutions of 1948-49?
5
When was the deadliest year in human history in absolute terms?