Which car was the first to come with a cigarette lighter receptacle?

While many cars today are phasing out the cigarette lighter (if they do have them they no longer include the lighter, just the socket), I was curious which car or car manufacturer was the first to include a cigarette lighter.

The wiki doesn't contain very much information and the inventor's German wiki never says that he invented the cigarette lighter. I found an interesting conversation on reddit but unfortunately it doesn't answer my question.

Anyone have any ideas?

Absent further clarification in the question, we might first have to differentiate between: 1. the first car with an electric lighter ("installed/wired in"?), 2. with such a lighter as standard equipment, 3. with a lighter executed as a "receptacle", 4. with a lighter receptacle standardised?

The cases 1 and 2 might result completely different results than 3 and 4. The earliest electric lighters were usually on a cord, bringing the heater element in direct contact with the to be lit material while still being connected to power. Cases 3 and 4 made power and heating element detachable so that the actual lighter was then realised as a plug that became standardised in the 50s and is now the "receptacle" that is said to be on the way of being phased out.

One stationary example with a non-detachable cord from the 20s: 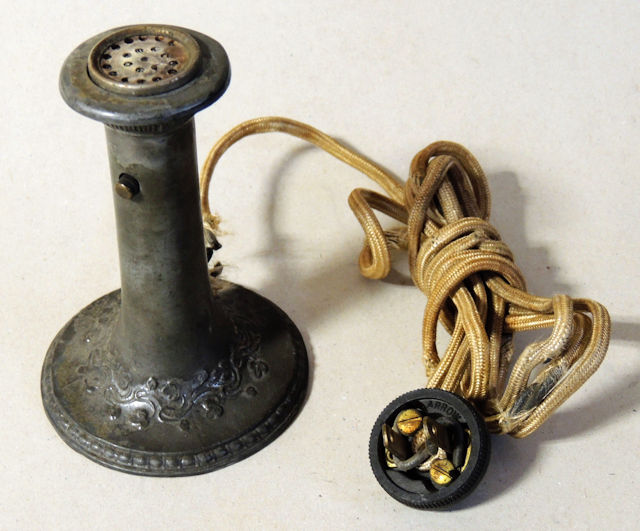 According to the article Zigarettenanzünder: Geschichte und Funktionsweise,

Translation: It was only in the 1920s that the term "cigarette lighter" prevailed - with the cigarette becoming more modern. Around this time, the first vehicles were equipped with this feature - initially in the US.

Given the above, it would seem very likely that the first car 'to come with a cigarette lighter' was the Lincoln L model in 1920 (as mentioned by called2voyage in the comment above):

The Lincoln L model was introduced in 1920 and was powered by a 357.8 cubic-inch V8 engine producing 90 horsepower, riding on a 130 inch wheelbase and weighing in at 2490 pounds. It was priced at $4,300. The large body built by Murray features unique features such as a 'fat man' steering wheel that folds out of the way for ease of entry and a cigar lighter that extends from a reel to reach throughout the interior.

The phrase "extends from reel to reach throughout the interior" would make that car fall into the category of1 and 2, not of the recepetacle/plug type.

There is also a reference in Car: The Definitive Visual History of the Automobile to 'cigar lighter' in the 1922 Lincoln L sedan. 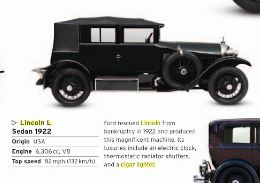 According to a link provided by LangLangC,

Translation: …retrofit solutions were already available, according to the magazine "Oldtimer Markt". Already since 1907, AEG offered a device with a platinum glow wire, which heated itself at the push of a button.

This, though, was an 'optional extra' rather than a feature. This article also says a 1924 Cadillac had the first cigar lighter, but it seems the writer missed the Lincoln L (for which there are two sources).

So this leaves a bit room for confusion over terms. ––– According to Jason Torchinsky: "A Tribute To The Cigarette Lighter Plug, The Original Car Hack"

Early ones had a heating element connected by an extendible cord, but these were ungainly and awkward — getting the cord reeled back in couldn't have always been easy. Getting rid of that cord was key, and the earliest patent I found that seems to have achieved this design was filed on October 2, 1919 — the birthday of both my sister and Mahatma Ghandi.

Not the answer you're looking for? Browse other questions tagged modern automobiles or ask your own question.

9
When did the Taxi become associated with the checkered pattern?
12
Which single-car accident in history caused the most deaths?
10
What was the first broadcast television programme?
7
Were there any elections in the First French Empire?
7
What demographic of people were the Ford Motor's Company biggest customers during the car boom of the early twentieth Century?
4
What did Sweden do with all the wrong-sided steering wheels after Högertrafikomläggningen?
6
What rights did women have in Switzerland in the first few years of the 20th century?
10
How many trucks did Russia and Germany have at the start of Barbarossa?
9
When was the first known international call between two heads of state or government?