Is it true that Operation Popeye had a trial run in India - code name project Gromet?

There are speculations that the artificial rains created by US over the Ho Chi Minh trail during Vietnam war to slow down the enemy movement, had a prior trial run in drought hit states of India.

Yes, but it wasn't a trial run for Popeye.

There was a series of classified "rainfall augmentation" projects called Project Gromet. Gromet was over India in 1967, and Gromet II: Wallace's Revenge was over the Philippines in 1969. They were classified military projects to increase rainfall for both military and civilian purposes. You find a lot of that dual-purpose projects in the 60s.

Operation Popeye was happening simultaneously with Gromet from 1967 to 1972 and was for purely military purposes. Rather than Gromet being a "trial run" for Popeye it was more the other way around. The testing for Popeye in 1966 is part of what encouraged Gromet.

The "trial run" for Popeye was Project Stormfury from 1962 to 1983, an experiment to weaken cyclones by seeding them. It wasn't so much a trial run for Popeye as an experiment to see what was possible. Someone got the bright idea to militarize it later.

Why was India used? Again, like so many things in the 60s, science and the Cold War got mixed together. The US was trying to defuse the tensions between India and Pakistan while also trying to bring them into the US sphere of influence. This was done, partly with economic aid. For India, struggling to feed its people, a project to increase rainfall seemed perfect. This was done with the consent and knowledge of the Indian govt.

The best online narrative I can find about it comes from Prometheus Unleashed: Science as a Diplomatic Weapon in the Lyndon B. Johnson Administration, pages 13-26.

...India suffered a serious crop failure in 1965 when the summer monsoon—India’s rainy season—failed. Hardest hit was the state of Bihar, with a population of over 51 million and a primary grain crop heavily dependent upon water: rice. Without water, the paddies dried up and the rice shriveled and died. Although crops can be saved with irrigation, Bihar was almost exclusively dependent upon rainfall....

The Indian government insisted that any comments on this project connect it to agriculture, not military objectives. Thus, India and the United States were playing a high-stakes game of diplomacy with GROMET. If the rains came, and the crops were saved, India would be able to claim a scientific and agricultural breakthrough. If the project failed, and it later came out that the U.S. had been using classified military techniques under the cover of an “agro-meteorological survey,” both governments could be severely embarrassed...

In the cloudless, dark early morning of Monday, 23 January 1967, a large unmarked U.S. military transport plane, several small disassembled aircraft resting in its belly, landed just outside of New Delhi at 5 A.M. On board were atmospheric scientist Dr. Pierre St. Amand and his associates from the Naval Ordnance Test Station (NOTS), China Lake, California. They were in India to undertake a secret mission: the breaking of the crop damaging Bihar drought, one of the greatest humanitarian crises of that time, by classified, military-developed weather modification techniques.

One of the things that I learned while researching this is military weather people use some jaunty fonts. 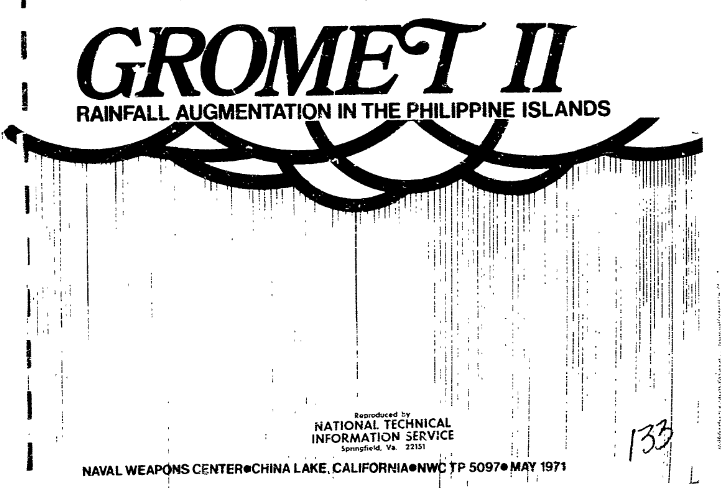 12
Which Japanese military officers helped Ho Chi Minh?
7
Why did the US use so much ordnance during the Vietnam War?