During the Siege of Alesia, why were certain Roman forts located outside the circumvallation lines?

I am reading Caesar's Gallic Triumph, Alesia 52BC by Peter Inker, and he provides a few maps of the camps and forts around Alesia. Two of the camps (camp H & K) are located outside of his cirumvellations lines, so they are completely exposed on all sides to Gauls. The only mention of the two in the book is that camp K housed Caesars cavalry and guarded the approaches to the river, and that camp H could also hold cavalry and guarded the northern plain and the Oze river. Evidence that they held cavalry has been found in later archaeological digs.

The locations of these camps just dont make much sense to me, for one they can be completely surrounded (especially in the case of H). Also as the majority of the Gauls were camped betweeen the Oze and Ozerain, so for the cavalry in camp K to attack the main Gaulic force they would have to cross the Ozerain first before entering battle, which does not seem very wise.

Caesar obviously knew that the Gauls would concentrate in the Plain of Laumes (which is why he had the stoutest defense there) so why would he put forts in these locations? what role did they play? 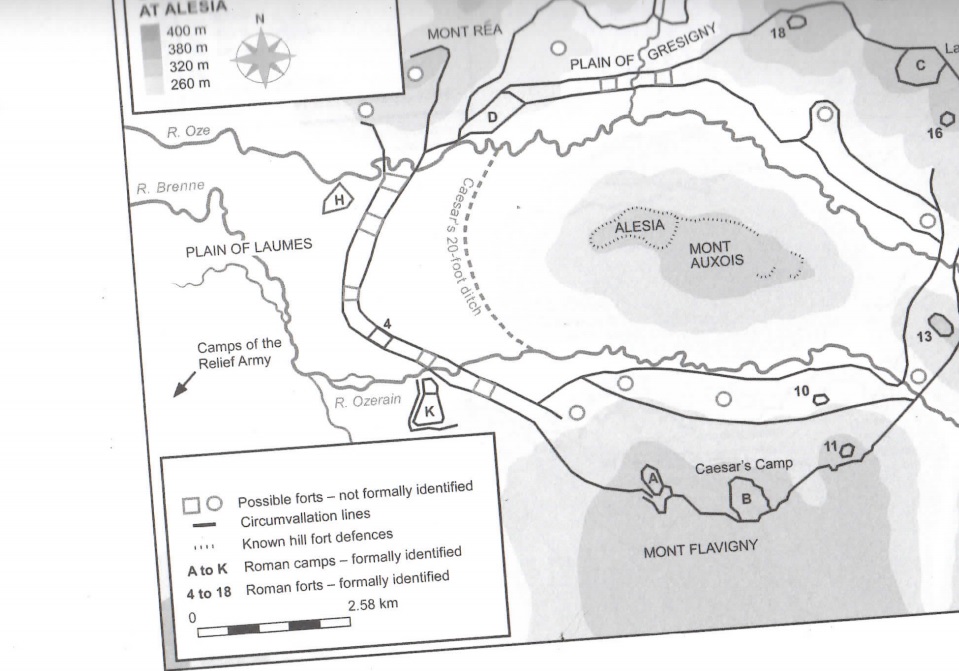 UPDATE: After watching a documentary on the subject where they reconstructed the fort from archaeological digs, they came up with this map, which clearly shows the cavalry camps connected to the main camps. I can't say which is 100% correct but this newer maps definitely makes more sense to me.

Even though the cavalry appears to have been protected by the circumvallation line, which protection was required by the fact that the Roman Army was also besieged by superior numbers, the cavalry forces still had the ability to move at will beyond the fortifications. It is also possible, even likely, that small groups of cavalry were outside the circumvallation line in observation posts but still under the protection of Infantry and cavalry troops within the line.

As the previous commentator noted, cavalry placed inside the lines would have been seriously restricted in their movements. Equally important, oppposing troops could have quite easily boxed in the cavalry by creating narrow corridors for them to pass through, and these corridors would have negated the blunt force of a cavalry unit in line of battle. At this time, it's likely that Julius Caesar would have thrown the cavalry into a battle first in order to split the attacking forces into small and disarrayed groups that are easier to destroy than solid masses of troops. The cavalry, then, had to have complete freedom of movement, not protection from a fortified line.

Cavalry troops, in addition to providing what we now call "shock and awe," are an army's eyes and ears and so must be free to go wherever they think an enemy might be massing against them--in this role, the serve as an early warning system for the Roman camp.

9
What was the status of specialized workers during the Roman times?
18
Were Roman gladiators ever enlisted into the military?
14
Were Roman marching songs still bawdy during principate/dominate?
5
Which months were added during the Roman Empire?
9
Why were Roman dice elongated?
1
How were the Roman Triarii trained?
0
When did the Roman consular year begin during the Republic and Empire?
9
What is the purpose of this Roman siege tactic as shown in this Illustration?