How fortified was Cyprus during WW2?

How fortified was Cyprus during WW2? By that I mean how many Allied naval ships were defending it, how many aircraft and airbases, and how many troops with what equipment?

So far I've found very little. Wikipedia does not have an article about Cyprus during WW2, and I could not confirm which port the British were stationed in. This article was interesting, but it only explained that the Battle of Crete was bloody enough to dissuade Hitler from hopping to Cyprus next. He probably didn't wanna delay Barbarossa any further anyway.

Nevertheless, I would like to know how fortified the island was.

According to The Deceivers: Allied Military Deception in the Second World War, in June 1941 Cyprus contained about 4,000 troops which I think were elements of the 50th Infantry Division, the rest of the division was at El Alamein, plus local troops. They were designated as the fictitious 7th Division. These and other ruses, part of the "Cyprus Defense Plan", convinced the Axis they were facing up to 30,000 troops.

In mid-July 1941 the rest of the 50th (Northumbrian) Infantry Division arrived. To keep up the deception, the genuine 50th Division and the fake 7th Division made up the XVIII Corps (later XXV Corps).

In November 1941 the 50th was relieved by the 5th Infantry Division (India) which remained until April 1942. See Ball Of Fire, Chapter XII: Cyprus Interlude.

I had to piece this together from individual division information. I'm not sure if this was the totality of troops on the island.

My uncle, Lt Col John Ross Kennedy, OBE, DOS, of the Royal Engineers was attached to the 50th (Northumbrian) Division and in 1941 was in Cyprus charged with building the defences of Nikosia. He received his OBE for his successful completion of this task. You may find the information you require by following up his details.

He was killed near Tobruk in 1942, during the retreat after the battle of Galazia.

I hope this helpful.

Taking into account the other answers and comments, I'll limit this to filling in a couple of the gaps.

Naval Forces
I agree with the comment that the British Mediterranean Fleet based at Alexandria was the primary naval force responsible for defending Cyprus.

Air Forces
I also agree with the comment that few planes were generally stationed on Cyprus during the period in question. Indeed, in October 1941, according to the British official history of the RAF (Vol.II), the RAF was able to bring its numbers in Egypt up to an acceptable level for the impending CRUSADER offensive by "stripping down Iraq, Palestine, Cyprus, Aden and the Delta almost to the last useful machine". So in terms of priority, we can see that it was not generally high on the list for Middle East Command. Nevertheless, during the Syrian Campaign in June/July 1941 there was an influx of air reinforcements to Cyprus which provides some insight into the air defense system available for the island. The main airbase on the island was located at RAF Nicosia, with a temporary satellite airfield built in an olive grove nearby. Most aircraft on the island appear to have initially based out of Nicosia, however due to bombing which became almost a daily occurrence during the Syrian affair, virtually all aircraft were moved to the satellite airfield. The Fleet Air Arm provided most of the aircraft available during this time, with squadrons drawn from aircraft carriers. No.815 Squadron, flying Swordfish, was the first squadron stationed on the island. Once the Syrian Campaign began, Operation FRUIT saw a surge of additional aircraft arrive from No.826 Squadron (Swordfish), and No.829 Squadron (Albacore), and some Hurricanes from No.806 Squadron also made a brief appearance before being sent on to Palestine. Reconnaissance planes from RAF No.203 Squadron (Blenheim) also passed through. It seems this flurry of air activity into and out of Cyprus was coordinated by No.201 Group RAF based in Alexandria, suggesting an ability to rapidly provide air assets to the island existed within Middle East Command if required. A more detailed account of these air operations can be found in The Fleet Air Arm in the Second World War, edited by Ben Jones.

Army Forces
The Cyprus Regiment of the British Army was founded on 12 April 1940. It included Infantry, Mechanical, Transport and Pack Transport Companies.

After the capture of Crete by the Axis powers in May 1941 there was speculation on both sides that Cyprus might be their next logical target. The following information from an Australian Army history website provides some detail of the initial steps taken at that time to further provide for the island's defense:

Following the German invasion of Greece, Prime Minister Winston Churchill believed that a force of about 1500 men was all that was required to deter the Germans from an invasion of Cyprus. Accordingly, the British 7th Division provided a brigade headquarters along with a battalion of infantry (the Sherwood Foresters). The mechanised component was to be the 7th Australian Division Cavalry Regiment.

The Regiment disembarked in Cyprus on 5 May 1941 and on 6 May the Regiment’s heavy equipment and transport arrived. Preparations to defeat the German invader began. On 10 May 1941 the Regiment moved to its main camp at Athaslassa, outside Nicosia.

One useful piece of ordnance issued was the towed version of the 2 Pounder Anti-tank gun, of which four were issued to the Regiment. Originally the guns were towed by 15cwt Fordson WOT2C trucks. Later the guns were mounted “portee” style on the back of Morris 30 cwt CS11 trucks.

The Regiment was organised into the standard headquarters squadron and three “sabre” squadrons. All vehicles had a dug-in defensive position for when they were not patrolling the island. This was also to protect the vehicles from the effects of dive-bombing.

The main job of the force was to show the flag, and make believe that there was at least a brigade on the island, which it was hoped would deter the German invader. Following the fall of Crete, air raids by the Luftwaffe and the Regina Aeronautica increased. In order to simulate the brigade size group, patrols of light tanks, machine gun carriers and trucks of the Regiment roamed far and wide over the island. The normal head dress of black beret with the small collar-badge size “Rising Sun“ was often substituted for the Australian slouch hat or steel helmet, to make it appear as though there was a large force on the Island.

Fortunately the German Airborne invasion of Crete was so costly in casualties that the expected invasion of Cyprus did not eventuate, and so the Regiment rejoined their parent organisation in garrison duties in Syria, where they relieved their sister unit, the 6th Australian Division Cavalry Regiment.

In June 1941, as described in other answers, the British 50th Division was deployed in stages from Egypt to Cyprus. The full division was in position around Nicosia by July, where it remained until relieved in November 1941 by the 5th Indian Division. 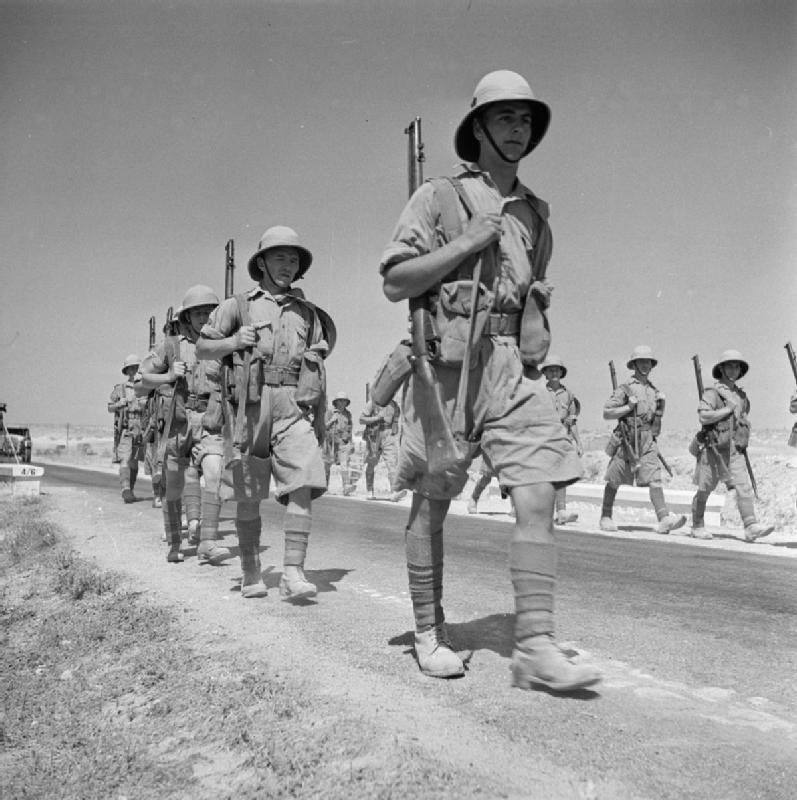 The British Army in Cyprus 1941 (Wikipedia)

Special Forces
In March 1941 the British Commando forces in the Mediterranean were reorganized into a Special Service Brigade consisting of four nominal 'battalions', 'A' (No.7 Commando), 'B' (No.8 Commando), 'C' (No.11 (Scottish) Commando), and 'D' (No.50 & No.52 Commandos), and placed under command of Colonel Robert Laycock as a constituent brigade known as 'Layforce' in the newly reactivated British 6th Division (formerly the 7th Division) in Egypt. When the bulk of Layforce was deployed to Crete during the German invasion in May 1941, No.11 (Scottish) Commando was instead sent to Cyprus to reinforce the garrison there. It briefly deployed to Syria as part of the British 6th Division's operations there, returning to Cyprus after the conclusion of the fighting in Syria.

There was also the Cyprus Regiment, mostly recruited locally, and whilst quite a large part fought well across the Med Theatre, there must have been an element that was involved in the defence of Cyprus. This might be a further area for your research.

Not the answer you're looking for? Browse other questions tagged world-war-two britain cyprus or ask your own question.

20
How was beer production affected by the war during WW2?
21
How close was the Soviet Union to collapsing during WW2?
6
What was the alcoholic beverage of choice for British soldiers during WW2?
5
In early WW2, how much of the merchant marine was American?
4
During WW2, did the merchant marine also return to Canada in convoys?
3
During WW2, how dependent on Swedish Ball Bearings was Britain?
1
Is there any research on the (possible) ancient origins of populations in different regions in Cyprus and their movements on the island?
1
Why did the USA revoke the arms embargo or sanction on Turkey only after 3 years of the invasion of Cyprus?
3
Was it illegal to express sympathy for Nazi Germany during WW2 in Great Britain?