What was the other 99% that PARC didn't show to Apple?

I was reading this article and found this part:

The irony was that when they left we still had shown the like only 1% of what PARC was doing but it was enough that they got really excited and decided they were going to retarget the Lisa to be something like what they had seen, in terms of GUI.

Has anyone written or summarized about the other 99%?

Even Steve Jobs himself mentioned that they had a whole lot of other stuff going on at PARC, but he got so excited about the GUI that he ignored everything else.

You can see a list of some of the other stuff PARC was working on here. I think the only thing of layman significance the Jobs didn't mention is probably the Laser Printer. But with all this stuff, the GUI used by their experimental computers was kind of a small thing. To them at least. 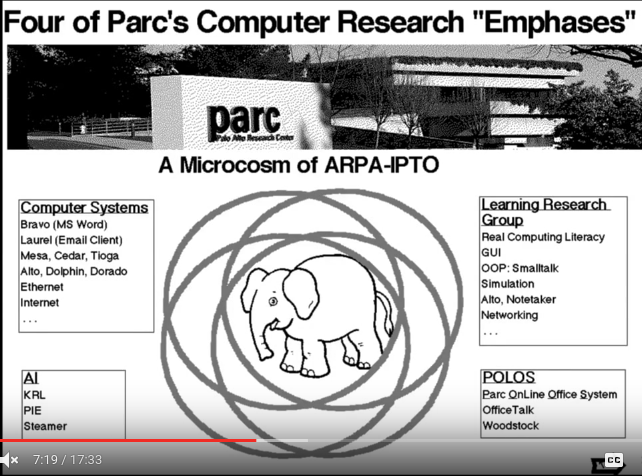 Not the answer you're looking for? Browse other questions tagged technology computers or ask your own question.

2
What computer was used in 1958 for handwriting recognition by Dimond?
3
Other possible inventors of the Transistor?
2
Why was Apple not able to compete with Microsoft in the home PC market?
9
Are there examples of stone age cultures living in proximity close to iron age cultures without adapting to metal use?
9
Who first conceived and developed the acoustic homing torpedo, and when?
2
Did people in the late 1800s and earlier really think that there would be, or already exist, "mechanical men"?