Who were the first people to get divorced in Western* Christendom?

By divorce, I mean that the law recognises that two people used to be in a legally valid marriage, but are no longer married.

So, eg Henry Tudor doesn't count, because his marriage to Catherine of Aragon was annulled, and therefore (retroactively) never legally valid in the first place. Or according to the Vatican's perspective at the time, he was legally married to her until she died, and was therefore a bigamist.

I know of a Galician (NW Iberian Peninsula) charter issued before a notary and a judge in 1457 where a married couple divorce by mutual agreement. You can access a good edition of the original document here: Gallaeciae Monumenta Historica. The original document is contained in the notebook of a notary from western Galicia, and it is dated in 1457. My bad, fast translation from the original, which is written in Old Galician:

This day, month, and year, in the aforementioned place; Fernando Miguéns, stonemason, said that, because he was unhappy with the life he was doing with his wife Dominga, and with the intention of refraining from harming one another, that he wanted to separate from her, and that he gives back her freedom, so that she from this day on could do with her body and possessions anything she would like to. And the aforementioned Dominga said that, since this was his will, that he shall take the burden of this decision on his soul, but that she was conform and as well she free him so that both of them could be free of one another. And both parts promised not to accuse one another under penalty of paying 100 florins of gold. Two charters were written under these premises. Witnesses: Fernando of Catoira [,knight ,] and Gomez of Ribademar, judge, and Diego Maceda, citizens of Rianxo.

So, apparently the wife have some spiritual concerns on the decision, but otherwise she agreed. I must say that I have read thousands of medieval Galician charters and this is the only one (I am aware of) containing a (civil) divorce.

I have found another, earlier, one. It was issued in Ourense, in the SE of Galicia, in 1434, and among the witnesses there were a priest. The edition of the original document can be found here. In this case the couple decided to divorce because they had both committed adultery and hated one another, so, pretty atemporal, isn't it? Again, my cheap fast, and now partial, translation:

In this day; Estevo Calvo and his wife Inés of Bovadela, because they were married [...] and because there is such discordance and enmity between them both, because both committed adultery, so that they are both in sin in case they both would made common life, and with the intention of doing a good service to God and to one another, both will give one another a charter of partition so that each one can do with his or her body as he or she likes, as if they had never been married, and so from this day on they could marry other persons, or sleep with other persons, or live with other persons [...] Witnesses: Rodrigo Eanes, Clergyman of the choir of the Cathedral of Ourense, and Afonso of Luxilde, and Vasco, attendants of Pascual Rodríguez, and others.

If you count Spain as part of Western Europe, then divorce was available at least to the Muslim population from the time of the Arab conquest in the 8th century until the Catholic reconquest in the 15th century. The same is true for the Jews, both in Islamic and Catholic Europe. As I mentioned in a comment to another answer, Fredrick II legalised civil divorce in Prussia in 1752, long before the British Matrimonial Causes Act of 1857.

It all depends on the meaning of the term and on the period, considering the differences between annulment and modern divorce.

Marriage became a sacrament only in 1215 with the Fourth Council of the Lateran, after a period when there were no marriage contracts and marriage could be dismantled (according to the French Wikipedia article on history of divorce). The church opposed this practice but had difficulty in imposing its views even after 1215, as the answer on the Spanish cases shows. Annulment and divortium in the sense of "Séparation de corps" were practiced as an alternative to the divorce in the modern sense, as they preserved the sanctity of marriage.

Remariage seems more problematic, notwithstanding the Spanish cases. But practically one can imagine that it was not impossible, the farther one went from the location of the previous marriage, given that centralized records were absent.

In a larger sense, divorce seems much older in European countries than the dates posted in answers here in relation with England and Prussia, which invoke modern legislation.

More or less amusing, one reason for the mariage to be annulled was sexual impotence, which (at least in France) needed to be proved or disproved within the ancient judicial institution of Congrès.

In the Middle Ages, until the beginning of the eighteenth century, the Congress was a judicial ordeal, ordered by the judicial authority generally at the demand of the wife, which the husband had to undergo in order to prove his sexual potence in view of the cancellation of mariage or of divorce. In the presence of judges, officials, councilors, lawyers, court clerks, and medical experts, the spouses were united in a closed bed that was in use at the time, and it was for the Court to witness the impossibility of sexual relation between the spouses. This process, which was somewhat of an ordeal, was gradually abandoned as unreliable, as some husbands who had been impressed by the solemnity of the judicial system, proved fertile after remarriage.

The Wikipedia page lacks references and may be incorrect (mentions both divorce and remarriage instead of just annulment, and a later date for the end of the practice), but some references can be found here. 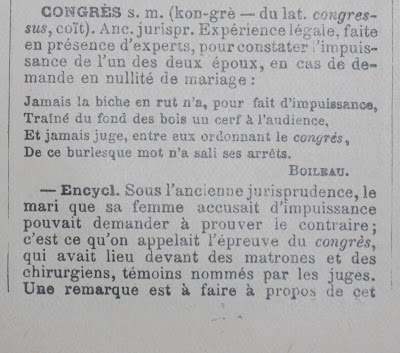 The article is from the Grand Dictionnaire Universel of Pierre Larousse, of 19th century.

The practice seems to have been abolished in 1677.

The Matrimonial Causes Act 1857 was the first divorce law of general application. dfp.co.uk

Caroline [Norton] was a moving force behind one of the most emancipating pieces of legislation in our history, the Marriage and Divorce Act. . . DailyMail

Not the answer you're looking for? Browse other questions tagged europe marriage or ask your own question.

26
Who were the pre-Celtic inhabitants of Western Europe?
16
Who was the first head of government to support same-sex marriage?
22
Why did some people need to pay a bond in the 1700s in order to get married?
35
Did people use to marry much younger during the last millennium?
4
Was the 1852 Richard/Bolcoff divorce the first one in California?
4
Who are the people on the cover of James Joll's Europe since 1870?
2
The history of toys: Who invented the first porcelain dolls?
4
How were border controls implemented in Western Europe in the 1970s