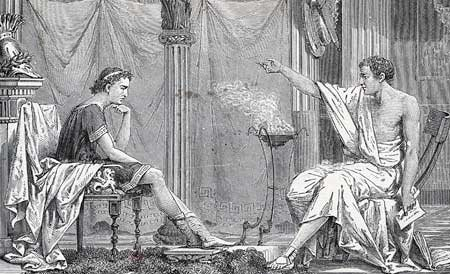 I was given this task to form a paragraph after this picture (by drawing inferences) but I can't even figure out, where to start. Can someone tell me what's the story behind this picture? Thanks.

Start with the people. Which is Alexander, and which is Aristotle? What does their dress, posture and so on tell you about them, and the relationship between them? There will be things you're interpreting without realising. What are the other objects in the picture? What do their positions relative to the people mean?

Figure these things out piece by piece, and don't try to write your paragraph summarising them until you've considered everything.

Well, clearly the picture shows Aristotle teaching or tutoring a younger Alexander III. The younger man in the picture is Alexander-(around High School age) and the older gentleman is a middle aged Aristotle.

Aristotle was hired and employed by King Philip of Macedon, to tutor/teach Alexander III during his High school years in the Northern Greek town of Naoussa. In fact, before Aristotle officially opened his Lyceum in Athens, he spent time as a working Scientist on the Asia Minor Aegean coast, then spent a few years tutoring/teaching Alexander III. There is a small collection of Aristotle's tutorials called, "Rhetoric to Alexander" within the larger collection of Aristotle's works known as, "The Organon".

Not the answer you're looking for? Browse other questions tagged alexander-the-great or ask your own question.