Why did Guinea vote so differently in the 1958 French constitutional referendum?

In the 1958 French constitutional referendum, 79.3% of Metropolitan France and 82.3% of the territories voted in favor of the constitution. Out of the latter, votes in favor ranged from 64.40% in French Polynesia to 99.99% in Côte d'Ivoire. Except for one major outlier: Guinea, where 4.78% voted in favor and 95.22% voted against.

Why was there such a huge difference in the attitude to this referendum between Guinea and any other territory? Wikipedia notes that Alongside Niger, Guinea was one of only two territories where the major political party campaigned for a "no" vote, but I wonder if that is enough to explain it, in particular since Niger had 78.43% voting in favor.

Many of the African political leaders who emerged in the 1940s & 1950s (e.g. Felix Houphouet-Boigny in Cote d'Ivoire and Sekou Toure in Guinea) were charismatic figures who were seen to stand up to the colonial powers on issues of vital concern to the local populations.

Africans identified with their political leaders as leaders of their territories. Indeed, as founders of the first mass political parties in their territories, leaders such as Houphouët-Boigny, Senghor and Touré symbolized the nation for many party members and sympathizers, and indeed for the wider electorate.

(T. Chafer, 'The End of Empire in French West Africa')

At the same time, from 1950 onwards (at least in West Africa), the French administration worked hard to co-opt the local elites:

These measures included banning the familiar 'tu' habitually used by Europeans when addressing blacks, inviting prominent Africans as a matter of course to official and private ceremonies, liberally awarding study grants, and systematically recruiting young people with secondary and higher education for local positions of responsibility in French Equatorial Africa. As a result, when the basic law was passed in 1956, the African élites enthusiastically accepted political autonomy but without any hostility towards France and without any desire to break the structural relationship with the former colonial power.

For the most part,

...nationalist movements developed slowly in French West Africa, in contrast with the British colonies. This was because the openings of the post-World War II era brought the African political elite into a close-knit relationship with France. A handful of them served in French cabinets in the period of decolonization.

This 'close-knit relationship' was to prove the key to France maintaining a high degree of economic and even political control on most of the Francophone countries after independence was achieved (mostly in 1960), a situation which has featured prominently in the literature on neo-colonialism (by no means the just preserve of left-wing academics). 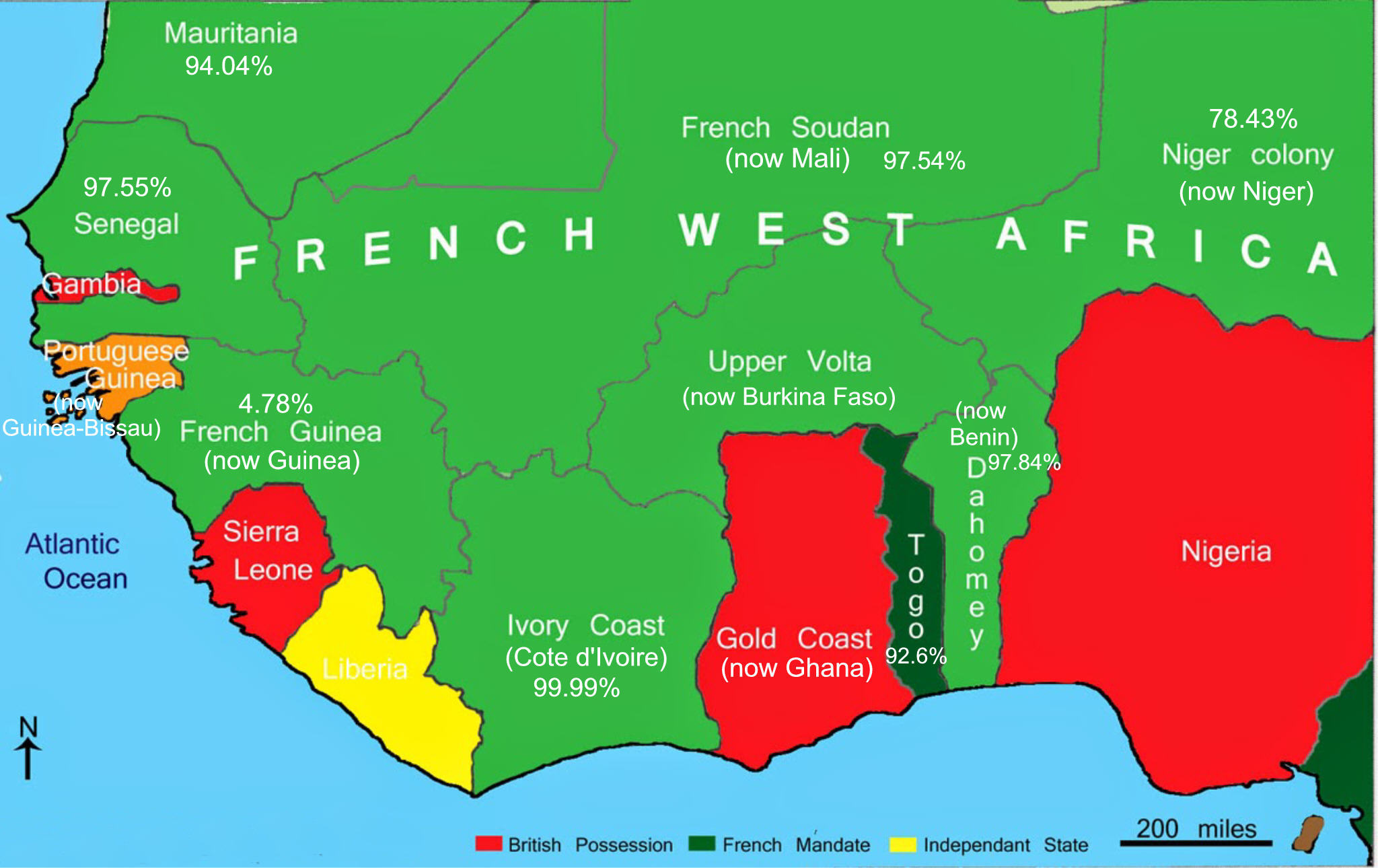 Sekou Toure actually favoured a union of former French colonies but he saw French involvement in African affairs (as per the 1958 constitution) as exploitative.

Before the referendum in September 1958 he stated, ‘We prefer poverty in freedom to riches in slavery’

His highly successful involvement in union activities from the mid 1940s made him popular with workers (but unpopular with the French authorities) and ultimately enabled him to persuade union leaders to back a 'no' vote in Guinea. An adept politician, Toure used his name to increase his popularity by claiming to be a descendant of the Muslim warlord and cleric Samori Toure who had resisted the French colonial advance for some 16 years in the late 19th century. He also recognized that, if the nationalist movement was to win,

it needed to broaden its appeal beyond its largely urban and trade union bases into the rural areas, which were the main electoral power base of Africa’s political leaders. This was the US-RDA’s strategy in Soudan and it was also Sekou Touré’s strategy in Guinea, where he used the trade union movement as a base from which to construct a wider anti-colonial front...

(T. Chafer, 'The End of Empire in French West Africa')

Drawing on the prominence of Islam in Guinea, Sékou Touré unified the region’s diverse ethnic groups with an unspoken promise of making Guinea an Islamic state (which, ultimately, he did not do). By advocating a greater role for African women in public office and a redistribution of land, Sékou Touré appealed to peasants, women, and youth

In 1957, just a year before the vote, Sekou Toure's party won 56 of the 60 seats in the territorial assembly. He was thus by far the most influential figure in Guinea and, like Houphouet-Boigny in Cote d'Ivoire, successfully used his influence to sway the vote in the direction he wanted, though in the opposite direction to Houphouet-Boigny. The overwhelming 'yes' vote in Cote d'Ivoire was largely due to the influence of Felix Houphouet-Boigny, champion of peasants and small planters. In fact, Houphouet-Boigny was so idolized by most Ivorians that, even when the Ivorian economy faltered badly some 30 years later, he was still widely popular.

In Niger, the situation was different - there was no one single dominant figure at the time, and the two most prominent local politicians were publicly divided. The leader of the 'No' movement, Djibo Bakary, lacked the influence and political acumen of Sekou Toure, and was undermined by his anti-tribal chiefs policy. Hugely influential at the grassroots level, the chiefs unsurprisingly opposed him and urged a 'Yes' vote. The French government, concerned about the potential threat of an unfriendly political leader in a country which bordered Algeria, also worked hard to bring about a result favourable to their interests.

As a footnote, the change from colony to independent country was not easy for Guinea. Although Sekou Toure's policies were at least partly at fault, the French reaction to the 'No' vote was ruthless. As African Heritage notes,

It was seen as a treason and an affront… and France never forgave Guinea, destroying files when leaving, withdrawing abruptly, destroying infrastructures, and breaking political and economic ties.

Actually, France and Guinea have since reconciled to a great extent, but at the time the French delivered a harsh message, one which other Francophone countries were well aware (before the referendum) that they would have received had they also voted 'No'.

T.Chafer, 'The End of Empire in French West Africa'

Not the answer you're looking for? Browse other questions tagged 20th-century france africa decolonization or ask your own question.